Afghanistan has been artfully ignored 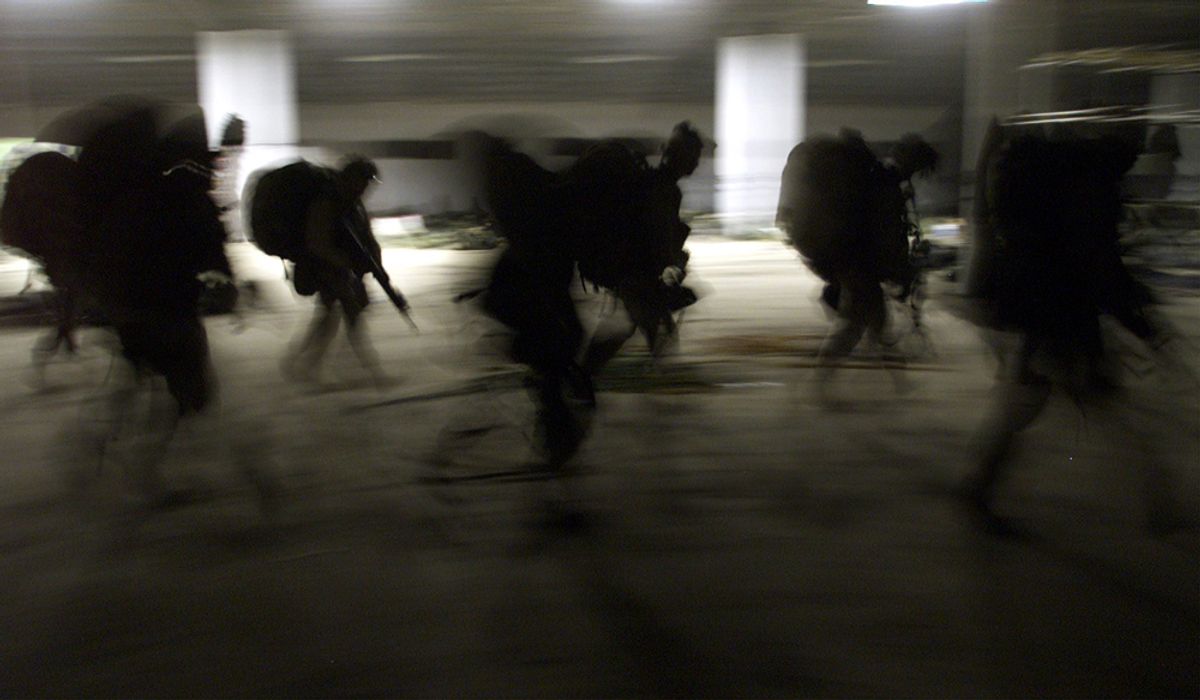 United States Marines from Bravo Co. of the 15th MEU (Marine Expeditionary Unity) march into a barracks in full battle gear as they arrive early November 29, 2001 at the US Marines forward base in southern Afghanistan. [Already hemmed into a shrinking swath of mountain and desert by nearly eight weeks of U.S. bombing and ground offensives by their Afghan foes, the Taliban now face another threat, hundreds of U.S. Marines pouring into a remote desert airstrip within striking distance of Kandahar, their spiritual cradle.] (Â© Jim Hollander / Reuters)
--

I was asked Friday about why the McChrystal story, of all the tales of woe and misbehavior in Afghanistan, made the news. I had two answers: 1) It was in Rolling Stone, not Foreign Affairs or even The New York Times, and 2) Gossip is easy to understand. The war-weary American public doesn't really get the ground game in Afghanistan -- quick, point to the Helmand province on a map! -- but they do understand gossip and back-talk, and they understand that's not their picture of the American military.

As I've had more time to reflect, though, another question has come up: Why doesn't America care about this war? We cared deeply after 9/11, in a vengeance-is-mine kind of way. What's changed? Is the sting now too distant? Was Iraq a distraction? Is it the anti-Muslim bias of the Western world?

Sure, all of those, but also more: We've been led to ignore this war. The Bush administration and now the Obama administration have both worked to keep Afghanistan off our minds and out of our daily lives. Bush worked harder: His was the administration that prohibited photos of caskets being delivered at Dover, after all, and that routinely sent officials out to castigate journalists for not reporting more good news on the ground in both wars.

Obama hasn't exactly been reminding Americans of the great sacrifices being demanded on the ground (civilian and military), either. He shook up the leadership, sure, and he set a time line, but he's done it mostly with addresses to military organizations that get covered lightly on the news (if heavily in the blogosphere). His first Oval Office address, after all, was about the oil spill, not the increasingly un-winnable war to the east.

Journalists are complicit in this, particularly television journalists. Iraq has been an easier war to report: people know more about it (thanks to that other war there); people have stronger, clearer views on it (Never Should Have Gone There, Had to Do It Sooner or Later, or Saddam Was Coming For Us); and people recognize most of the terminology being used. Maybe your average American can't tell you the difference between Sunni Muslims, Shia Muslims, and Kurds, but they know there's a difference.

In Afghanistan, you have tribes people haven't heard of (Pashtun what?); a leader no one knows; no common enemy except Al Qaeda, which isn't the government (so not a Saddam corollary) and the Taliban, which didn't bomb us; war lords that are good; war lords that are bad; neighboring Pakistan playing an up-and-down role; an easy victory that's dragged into a terrible nightmare; and dozens of scandals and corruptions instead of one single, signature mistake (Abu Gharib), all led by generals who are Not Petraeus, until now.

There's been little to no effort made by the government to clarify these matters for the public. No big speech on our goals (besides getting the hell out) and no big explanation of our status since the election; no great definition of immediate danger even when we invaded. It's a mission that maybe the top commanders understand, but the civilian population mostly gets that people are dying, some of them "ours," some of them "theirs," and that's as far as we've been told.

What's our objective? What's our end game? Afghanistan is crucial to our interests? We're getting out in 2011? We're not getting out in 2011? We're staying until the end of time? We like President Hamid Karzai? We don't trust him? We need him? We're cut out of the peace talks? We're happy about that? We're targeting the drug trade? We made it worse? Our allies are the number one destination for opiates? They're bailing on the war?

Bringing the war home is more than opening up Dover to cameras and making the Secretary of Defense available to Congress. It should involve information coming to the people. The government is clearly not offering it, and the mainstream media is too entrenched in ratings pursuits to chase the stories. It should also involve sacrifice, outside of that demanded of military families. The Obama administration took a right step when it added the costs of the war to the budgeting process, but that only made the war real to those who understood what those numbers meant. Americans should have been asked to get engaged from the start; they should have had a full-court involvement press from day one, instead of an encouraged "life as usual" celebration from the originator of this debacle.

Informing the public and drawing them into the war effort would be a worthy use of the weekly YouTube address for the president. It would be a worthwhile series of fireside chats. Of course, to do that, the administration would have to have answers to the questions above, and I don't think they do.

That, of course, is part of the answer. Afghanistan is ignored because the administration and the military now want it to be. What should have shocked people in the Rolling Stone article was McChrystal's staffer admitting that truth:

Even those closest to McChrystal know that the rising anti-war sentiment at home doesn't begin to reflect how deeply fucked up things are in Afghanistan. "If Americans pulled back and started paying attention to this war, it would become even less popular," a senior adviser to McChrystal says. Such realism, however, doesn't prevent advocates of counterinsurgency from dreaming big: Instead of beginning to withdraw troops next year, as Obama promised, the military hopes to ramp up its counterinsurgency campaign even further. "There's a possibility we could ask for another surge of U.S. forces next summer if we see success here," a senior military official in Kabul tells me.

The advantage has always been the military's to lose in this war, so long as the White House conspired to keep the people in the dark. A little light now wouldn't be welcome, but it might also not be too late.