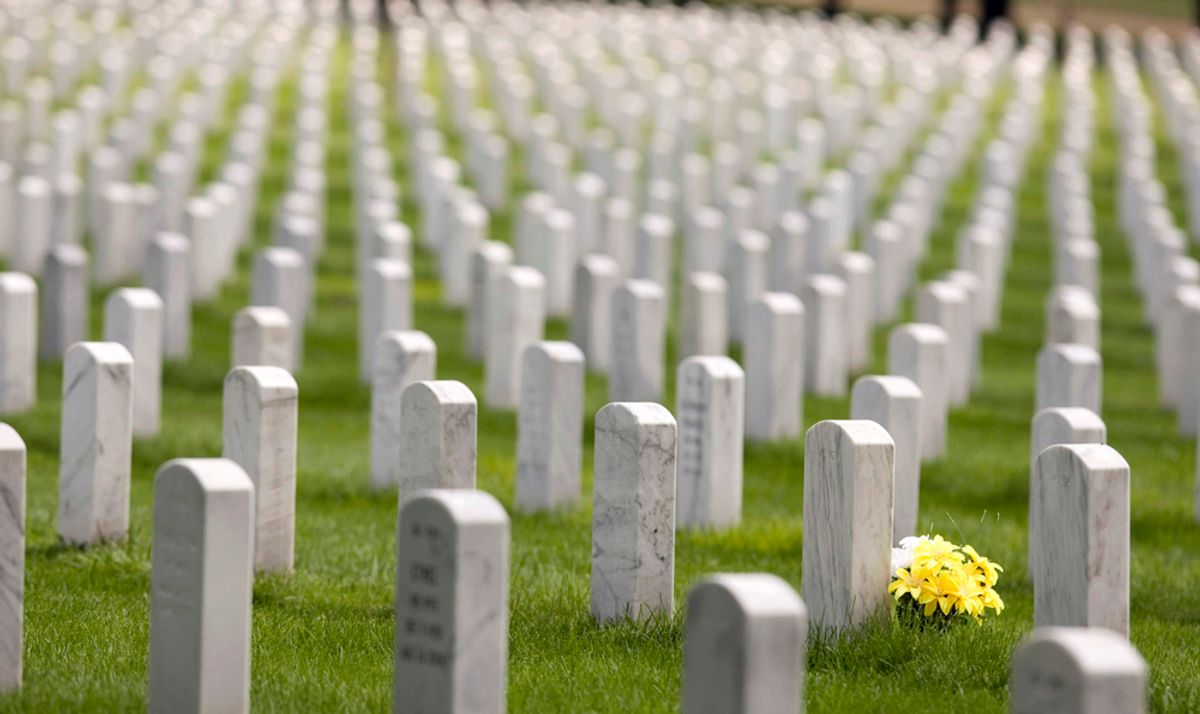 Flowers are seen amongst graves inside Section 60 at Arlington National Cemetery outside Washington, in this July 4, 2009 file photo. U.S. Army Secretary John McHugh announced the replacement of cemetery superintendent John Metzler, according to media reports on June 10, 2010. The action comes in the wake of an investigation that revealed that more than 200 graves have been improperly marked, or lack necessary paperwork. Picture taken July 4, 2009. REUTERS/Larry Downing/Files (UNITED STATES - Tags: POLITICS SOCIETY MILITARY) (Â© Larry Downing / Reuters)
--

Officials at Arlington National Cemetery have been quietly reserving particularly desirable parts of the burial grounds for VIPs. This violates Army regulations and federal law, which bar special burial arrangements for the powerful and well-connected and require that service members be buried in the next available plot at Arlington, regardless of rank or other factors.

This means that despite the rules, an influential general might get buried in a shady grove on a hill overlooking Washington in a plot that is easily accessible to visiting family, while a lowly private ends up in some back corner of the cemetery’s sprawling grounds.

Officials familiar with Arlington operations detailed the practice for Salon and, in response to questions, Army officials have now confirmed it. When asked on Tuesday if this seemed to violate the law, Army spokesman Gary Tallman responded, "Yes, it would."

This revelation represents a new front in the broadening scandal at Arlington and comes on the eve of a House Armed Services Committee hearing about the matter set for Wednesday. Already, the Army has confirmed hundreds of potential burial errors after examining only a small fraction of the 330,000 graves at the cemetery. The Army also says that the cemetery has funneled millions to contractors close to top managers there, but got little or nothing in return.

All of these revelations came in response to a year-long investigation by Salon that first exposed the fiascoes.

As the scandal unfolded more publicly this month, the Army stripped cemetery Superintendent John Metzler Jr. of his authority and created a new post to oversee operations there: the Army Cemeteries executive director, now filled by Kathryn Condon, a former special assistant to the undersecretary of the Army.

Army officials confirm that in her new post, Condon has reviewed cemetery burial paperwork. That review "raised questions as to whether Mr. Metzler pre-assigned grave sites," according to Tallman, the spokesman.

Condon confronted Metzler. "Mr. Metzler stated he had identified sections (for the burial of certain people) but did not assign specific grave sites," according to Tallman.

The cemetery is cut up into dozens of so-called sections. This is an odd defense from Metzler since reserving sections would still violate the law.

Despite those rules, the practice of quietly reserving sweet spots for VIPs has been going on for years, if not decades, Army officials now say.

Metzler has been superintendent since 1991. A 1990 Army investigation looked into similar allegations involving Superintendent Raymond Costanzo. That investigation "did in fact find that he had a de facto reservations system," Tallman confirmed. A version of the practice apparently continued under Metzler.

The news about special treatment for VIPs at Arlington comes the day before the hearing set for the House Armed Services Committee.  So far, however, that probe doesn’t look particularly rigorous.

Arlington is an Army facility. This is an Army scandal. Yet the committee will hear from only two witnesses, and both witnesses are from the Army: Army Secretary John McHugh and Lt. Gen. Steven Whitcomb, the Army inspector general.

The Army, however, has been relatively tight-lipped about the broadening scandal, refusing, for example, to disclose the potential scope of burial mistakes at the cemetery. Nor will Army officials say what they intend to do to rectify those mistakes.

All Tallman would say is that the Army will "reestablish an accountability baseline for all grave sites. We don't have specifics or details as of yet on how specifically they will accomplish this task."

The committee, which is chaired by Rep. Ike Skelton, D-Mo., will not be hearing from any former employees, spurned contractors who tried to do the right thing, or cemetery whistle-blowers who might be able to shed light on any of the glaring questions that remain about the scope of the problems at Arlington.

For example, the former spokeswoman for the cemetery, Gina Gray, has tried for years to sound the alarm about serious problems at Arlington, including burial errors. In a telephone interview, Gray confirmed that she had not been asked to testify before Congress.

"The purpose of Wednesday's oversight hearing is to get to the bottom of the problems at Arlington National Cemetery and to find out how the Army is going to fix those problems," committee spokeswoman Lara Battles said. "The hearing will focus on what needs to be done to move forward."

Veterans groups, however, warned that the congressional probe looks anemic so far. "The House hearing on Wednesday is not enough," said Paul Rieckhoff, executive director of Iraq and Afghanistan Veterans of America. "IAVA is looking to the Army and Congress to take more aggressive steps to figure out what took place and ensure this never happens again."