It takes an asteroid to show how wrong the right is

If the economy was ravaged by an asteroid instead of the Wall Street collapse, would they still want spending cuts? 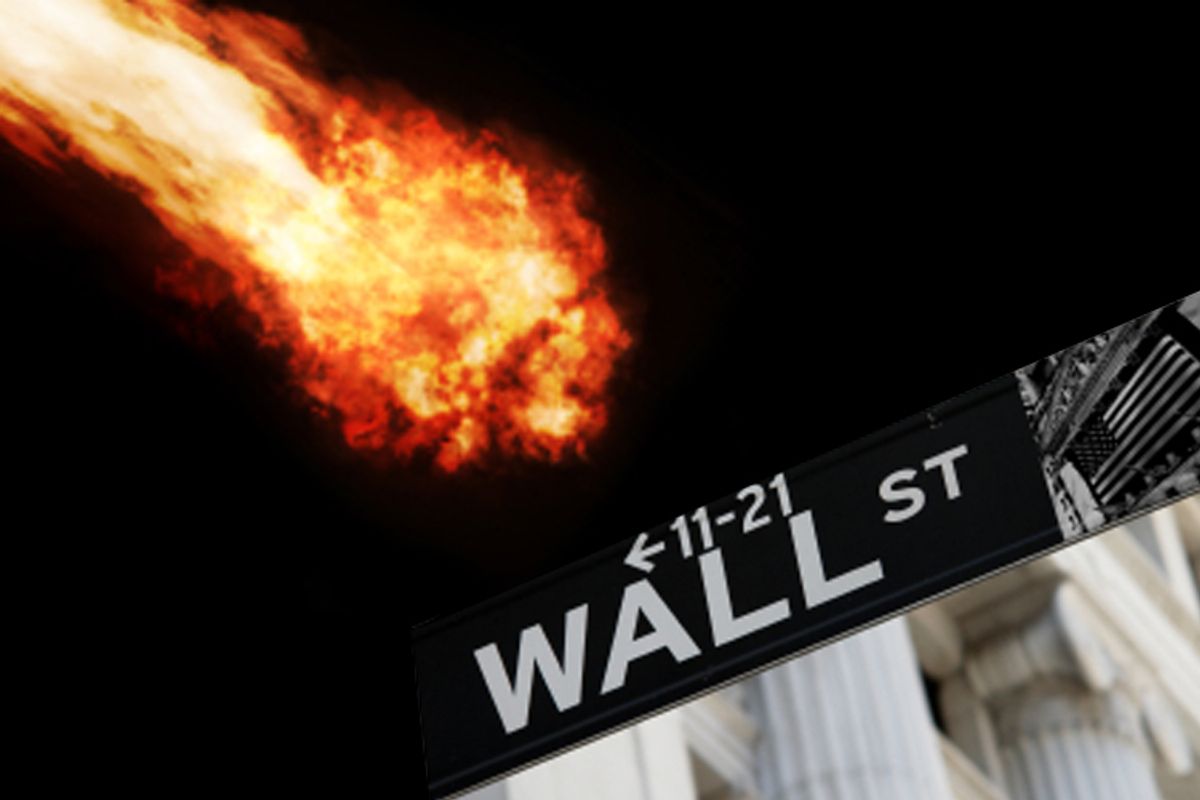 In the summer of 2010, even as the United States was still dealing with the consequences of the global financial crisis and the British Petroleum oil spill in the Gulf of Mexico, an asteroid struck the East Coast. Early warning systems permitted most of the region’s population to be evacuated, so that only a few lives were lost when the meteor fragmented and exploded above lower Manhattan, leveling Wall Street in the biggest impact of this kind since an interplanetary object detonated above Tunguska in Siberia on June 30, 1908.

The property damage was only the beginning. The stock markets of the world collapsed, plunging the U.S. and other countries from recession into full-scale depression. As the economic effects of the impact rippled through the economy, banks imploded, businesses toppled and millions more were added to the ranks of the unemployed.

While the cloud of dust was still clearing above the flooded crater that had once been Wall Street, in Washington, a bipartisan group of fiscal conservatives, Citizens for Understanding Taxation (CUT), held a press conference and called for immediate, drastic cuts in public spending. The following is from the press release issued by CUT:

The trillions of dollars in damage caused by the asteroid impact make it all the more important for us to address our long-term budget problems by slashing Social Security and Medicare now.

While it is important to respond to the asteroid disaster, it is even more important to cut spending now to make sure that the U.S. budget is balanced and there is a healthy debt-to-GDP ratio in the year 2050, as calculated by our own poorly designed computer models using unduly pessimistic calculations about growth in the next four decades in order to reach preordained and sufficiently "scary" conclusions.

Those who claim that government deficit spending is appropriate to compensate for the collapse of private spending during wars and natural disasters like the asteroid impact are relying on the discredited economics of John Maynard Keynes, rather than the sound economics of Herbert Hoover. By cutting spending and raising taxes following the crash of Wall Street in 1929, President Hoover eventually ended the Depression, even though the immediate effects were disastrous and the long-term effects were not visible until the "Hoover Boom" of the 1950s and 1960s.

At the White House, the president issued a press release of his own:

While rebuilding the shattered East Coast, restoring economic growth and reducing unemployment are priorities, moving the federal budget toward long-term fiscal balance is also a priority. This administration will treat both the short-term challenges caused by the asteroid impact and the purely speculative possibility of shortfalls in spending for entitlements half a century from now as equally immediate threats that must be dealt with simultaneously today.

To that end, even as I declare a state of national emergency in the Former East Coast, I am announcing the formation of a presidential commission to come up with a plan to balance the budget and reduce the national debt to implausibly low levels in a ridiculously short period of time. In the best Washington tradition, that commission will be bipartisan, made up entirely of wealthy right-wingers of both parties who agree only on the need to cut Social Security and Medicare.

I have instructed the commission that everything, particularly cutting Social Security and Medicare, is to be put on the table, except for raising taxes on the rich or cutting spending on the military or asking why, exactly, doctors, pharmaceutical companies and hospitals charge so much more in the U.S. than in other countries.

My heart goes out to all of the Americans affected by this rare and devastating cosmic event, whether they have suffered directly by losing loved ones and property in the disaster or indirectly by losing their jobs, businesses or homes. But in this time of national grief we must remember that there are problems even more important than coping with the aftermath of the asteroid impact, like spending hundreds of billions of dollars in Afghanistan to defeat a few hundred terrorists who have not been in Afghanistan for years, and cutting payments to the elderly and poor of today in order to head off budgetary shortfalls, which may or may not exist in 2050 or 2100 or whenever.

In the following week, the majority party leadership in the House agreed on a $2.1 trillion dollar Asteroid Impact Disaster (AID) program. Under pressure from political advisors in the White House concerned that the members of the majority party would be caricatured as big spenders, the House reduced the package to $2.1 million. Even this was too much for the majority party’s Green Eyeshade Caucus in the Senate, known as the "Green Dogs." The Green Dogs teamed up with the minority party to insist that all federal aid to the asteroid impact zone be paid for with offsets (cuts) in other programs -- with the exceptions of Pentagon spending and tax expenditures that disproportionately benefit affluent Americans.

Meanwhile, the collapse of the global economy following the asteroid impact triggered fiscal crisis in the states, as tax revenues cratered. Forced by state constitutions to have balanced budgets at all times, even in a period of interplanetary apocalypse, the states began firing schoolteachers and reducing police and fire protection. When progressives in Congress argued that the federal government needed to save the national economy by bailing out the states, the disproportionately Southern Green Dogs and their disproportionately Southern minority party allies issued the following joint statement from their annual bipartisan summer meeting in Richmond, Va.:

The proposal that the federal government bail out the states is objectionable on both constitutional and moral grounds. With respect to the constitutional issues involved, the idea that the fate of the states and the federal government are somehow bound up with each other is clearly influenced by the discredited big-government, preserve-the-union liberalism of George Washington and Abraham Lincoln. In the words of former president Bill Clinton, "The era of big government is over." Today in the 21st century we understand that the proper interpretation of the U.S. Constitution is to be found in the states’ rights theory of another former president from the Southern wing of the Democratic Party, Jefferson Davis.

The moral argument against a federal bailout of the states deserves equal weight. A federal bailout of the states now, in the aftermath of the asteroid impact, will create moral hazard. Knowing that the federal government will bail them out in future cosmic disasters, state governments will have no incentive to create colossal rainy-day funds of their own to deal with other rare, unpredictable and extremely unlikely cosmic events, like a nearby supernova that bathes the earth with sterilizing radiation or the passage of our solar system through a cosmic dust cloud that kills off all vegetation on our planet and renders most if not all of the human race extinct.

No sympathy should be shown to irresponsible state legislatures that did not prudently plan in advance for the possibility that an asteroid would destroy Wall Street and devastate the East Coast. State governments knew, or should have known, that such events are unlikely but possible. According to scientists, so-called bolide impacts of this magnitude occur approximately every 873,491.6152 years. Those estimates were available in advance of this disaster and the possibility of a catastrophic asteroid impact should have been taken into account by state governments when they planned their public employee pension systems.

When the federal government refused to deal with the asteroid impact by large-scale spending, including a bailout of state and local governments whose revenues had collapsed along with the economy, the U.S. spiraled deeper into depression, dragging the rest of the world down with it. The federal government worsened conditions by withdrawing even more money from the economy by means of spending cuts and tax increases, a policy that fiscal conservatives approvingly compared to a reverse transfusion from a hemorrhaging patient designed to store blood for other possible emergencies decades or generations in the future.

Bankruptcies and evictions produced wave after wave of suicides and robberies. Cardboard camps, mockingly called "Fisc Villes" after the triumphant fiscal conservatives, sprang up in the shadows of highway interchanges. The expanding legions of jobless and homeless Americans acquired a new name: "fiscos."

Amid the deepening darkness, there was one glimmer of light. The contraction of the U.S. economy was ameliorated by unexpected profits in the publishing sector, thanks to the publication of a best-selling novel by right-wing TV pundit Glenn Beck in which the asteroid impact turned out to be the result of a secret liberal conspiracy.

Michael Lind is the Policy Director of the Economic Growth Program at the New America Foundation and author of "Up From Conservatism: Why the Right is Wrong for America"