Gun control means nothing to my students 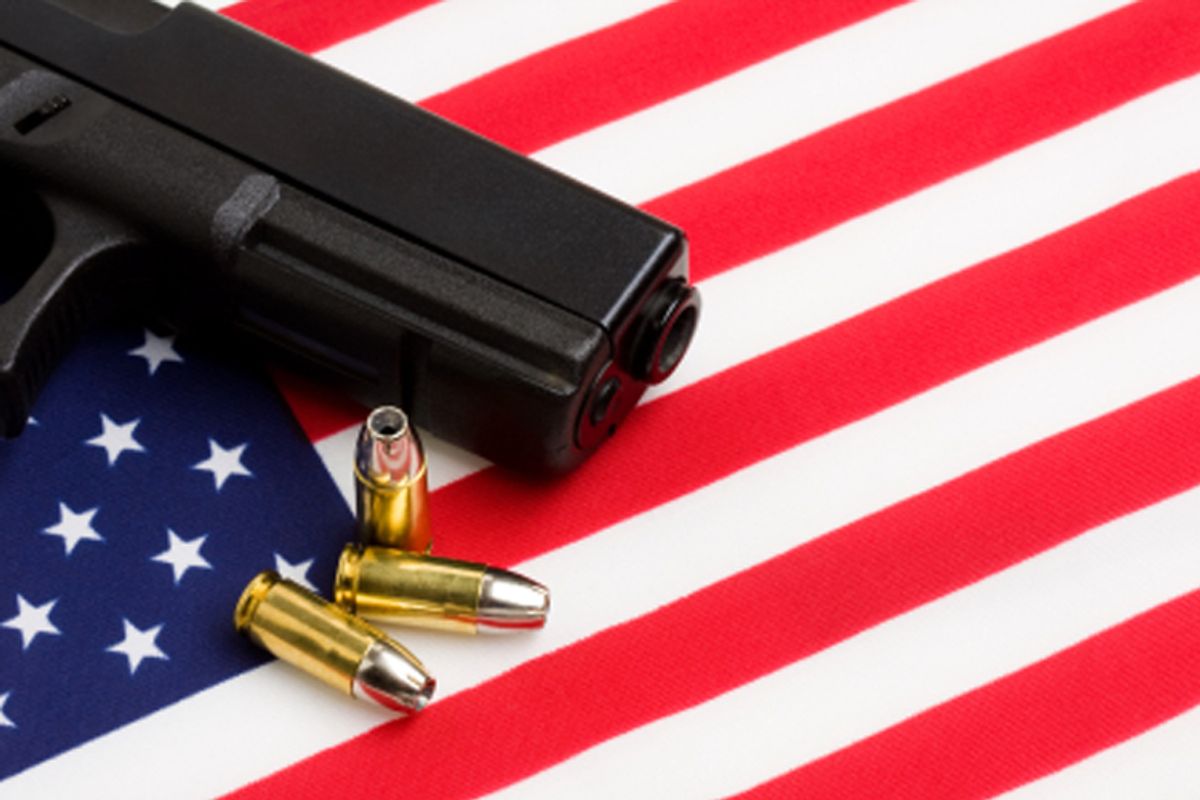 I am an ethics and English composition professor and have worked with prison inmates through community college outreach programs. The following revelations are drawn from conversations with and personal essays written by those who have served prison time (and some who still are serving time) for felonies.

Talk about firepower -- Supreme Court Justices Alito, Scalia and Thomas loaded up all kinds of judicial ammo to shoot down the arguments from Justices Stevens and Breyer in the Second Amendment case known as McDonald v. City of Chicago. When the smoke cleared and the 5-4 ruling was announced on Monday, Chicago's (and a Chicago suburb's) ban on personal handgun possession was a goner.

While a lower federal court in Illinois will now appraise the local bans in light of the Supreme Court's guidance, municipal attempts to restrict possession of handguns are now an easy target for Second Amendment absolutists.

Curiously, though, for some who have used handguns, the court's ruling has little impact. They "carry" not in homage to legal precedent but out of self-preservation.

"A gun saved my life more than once. I know for a fact that if I didn't have a pistol I wouldn't be writing this essay."

Those sentences were recently cobbled into the thesis statement of a community college English composition essay by a 24-year-old whose shoulders and arms are hardened from lifting free-weights, for six years, in several Connecticut prisons. With dreadlocks, sagging jeans, and a black leather baseball cap worn off-center, he doesn't resemble the folks who might routinely attend an NRA convention.

In his essay he described bullets whizzing past his head and shots taken into the bulletproof vest he was wearing: "Left me with 3 cracked ribs, two broken, and a bruised chest plate." I try to imagine the scene in the E.R. when he arrived -- from his battlefield, "the streets" where drug traffic congests and infects like a virus that is resistant to antibodies of every kind.

His urban warfare was drug-related. Having served time, he told me he's committed to staying out of street trouble. In a college hallway, he motioned to the picture windows that give us a panoramic view of culinary-arts students preparing all manner of "delectables" in a huge institutional kitchen. The culinary-arts students wore white chef's coats and headwear. Attired in jean blue and black quilted jacket, the young parolee smiled and nodded, "Beats what you have to wear in prison."

Would he ever carry a gun again?

He didn't answer right away. Then he described what could be the clichéd account of growing up ghetto. But I took his accounts to be genuine reporting: Kids -- 12 to 15 years old -- didn't play shoot'em-up games. They've witnessed shootings, or were certainly vividly and personally aware of them. Squabbles weren't settled just with fists. Sooner or later, a gun came into play, for real.

He wrote about a 13-year-old basketball buddy whose extraordinary ball-handling and three-point talents resulted in a point-blank finish: The boy had outplayed a 20-something -- who happened to be a "banger." Outside the gym, the banger's pride resulted in the 13-year-old's fall: "You tough, right, little nigga. OK, we gone see how tough you is."

What the banger couldn't accomplish on the basketball court, he accomplished with a point-blank dead-on blast to the boy's chest.

The student told me that he can understand the people who say there should be stricter gun laws to stop gun violence. But he loaded the answer: "So, I become law-abiding and I don't carry. What do I do when I finish work at a kitchen late at night and go out back and there's a guy with a gun wanting the money I just earned by sweating in a kitchen 12 hours. Take off my apron, put on body armor, and hand over my money?"

After a pause, he added, "When I was dealin', a gun was my business insurance. When I'm straight, a gun may still be life insurance."

The self-protection theme was presented by another parolee, in another English composition class I teach in a community college Criminal Justice program -- which attracts a number of young men who have had up-close-and-personal experience with law-enforcement, criminal-justice procedures, and the corrections system.

This 39-year-old seems to be well on the straight-and-narrow path -- after 18 years in prison. But 20 years ago, well before a fight at a party would result in a conviction that would send him to prison, he was doing maintenance and spruce-up at Metropolitan Transit Authority bus depots -- from 6 p.m. to 2 a.m.

"To get home, I had to take public transportation. Walk to bus stops. Wait at bus stops. And I might stop at a bulletproof swivel-window convenience store to get something to eat while waiting. Never failed, I was always approached for money. I was saving up for a car -- so I could get home safely. What I had saved enough money for was a gun: a 380 chrome semi-automatic. It's smaller than a 9-millimeter. Some call it the Baby Nine."

He had written about "shopping" for a handgun: "In the streets, we have our own version of the home shopping network. Whatever you want, it's been boosted."

"As a kid, I had to avoid gangs -- the Ball-Busters and the Decepticons -- who would intimidate just about anybody with ball-peen hammers, claw hammers, and, of course, 'hammers,' pistols. There weren't enough cops in all of New York City to deal with what was going on in just my section of the Bronx. My public safety was tucked inside my jacket pocket."

He shrugged within his black quilted jacket, which seems to be the protective covering of so many who have been part of "urban" commerce, warfare and self-defense.

Recalling his late-night early-morning journeys from work to home, he spoke of "resources" and responses and "recourses": "Let's say I get that kind of shift again. A cellphone isn't much of a deterrent. By the time I would be able to flip a cellphone to dial 911, I'd be Swiss cheese."

Would he carry again?

"I got a paying job, food service; I'm taking four classes; I do community service, which I'm good at. They want me to stay on. I got a path that may take me to a neighborhood and a life where I don't have to pack."

I ask him what he thinks of those who contend that they have a right to own as many guns and rifles as they want, without registration or restriction.

"What they got to be afraid of? Who they think is coming after them? If someone breaks in, what do they need 7,000 rounds of ammunition for? You don't need no arsenal to pop a burglar? What, they think al-Qaida's first order of business is to take out the gun case in their hobby room?"

Would he move in next door to such an NRA gun-fancier? He smiles. "I don't think that neighborhood is zoned for me."

Then he adds, "You know, somebody who has lots a guns and lots a bullets, they can't help themselves. Sooner or later, they got to shoot something or someone. I know. I was infatuated with weapons; probably owned a hundred or more. What I need a hundred pieces for? I almost shot myself in the leg more than once.

"A hundred, yeah, that's fascination, infatuation, yeah. Protection? You only need one -- and a hand that ain't shakin'. Hand control, not gun control."

What would he say to those who feel the need to have racks of guns and shelves of ammo?

He smiled as he shakes his head in the disbelief that comes from the "service" he was sentenced to, and from having negotiated "enemy lines" coming back from graveyard shifts: "What, there's some kind of invasion they be arming up for? Some kind of safety in numbers?"

He paused, nodded with self-approval, and offered a relocation plan: "Have 'em move into their own blocks. Gun owners only. Maybe they'll feel safe that way. Me, I'd like to move to a place where people don't need, don't want guns."

That student may just have given new meaning to "neighborhood red-lining." He chuckled and ventured something along these lines: They'd be posting billboard at the town line: Y'all now entering a gun zone. We shoot first.

In his paper, the student had declared that he and his cohorts were always armed when they went to parties. In a margin note, I wrote that his description seemed like it came out a Wild West movie, with strangers riding into town, flinging open saloon doors, and no one daring to ask them to check their six-shooters at the door. He replied: "Where I traveled, no one came to a party without a piece. I best not be going to any of those parties. But it's routine, it's a given. It's self-protection. Where I come from, it's a way of life."

Joseph H. Cooper was editorial counsel at The New Yorker from 1976 to 1996. In addition to his work in prisons and for community college outreach programs, he teaches ethics and media law courses at Quinnipiac University, in Hamden, Connecticut.