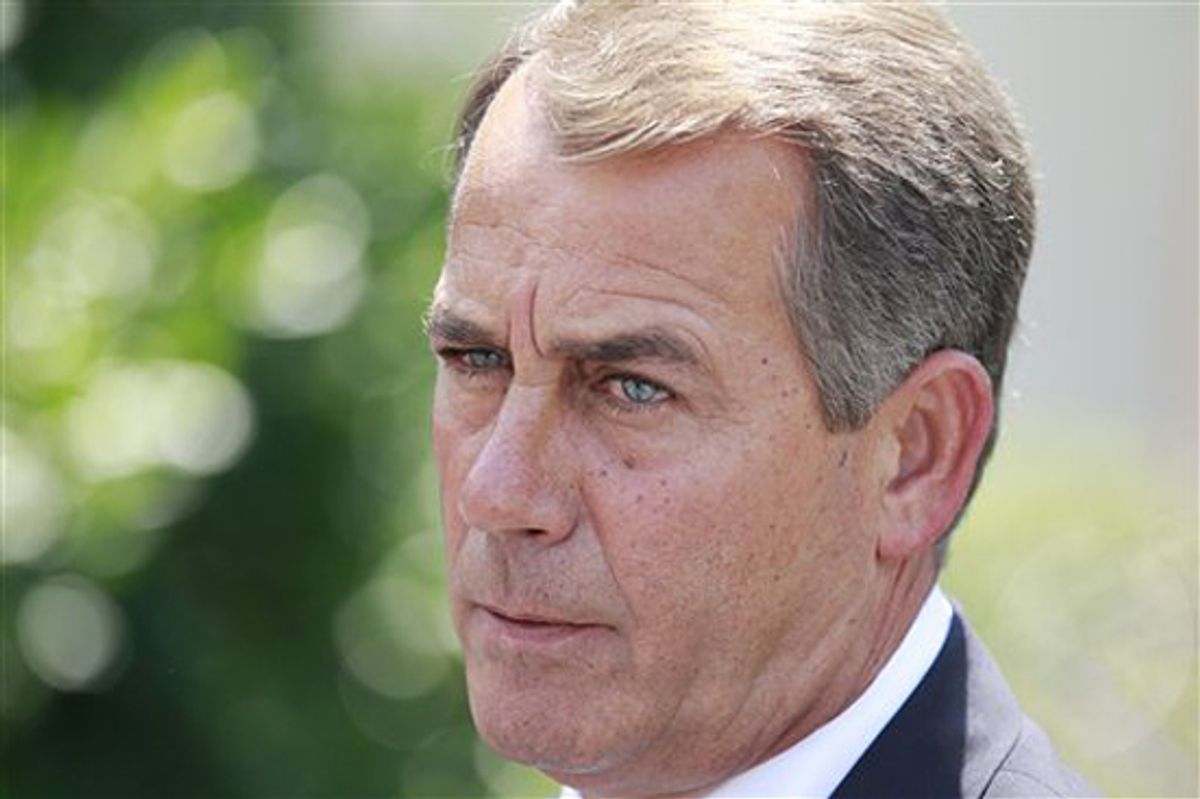 FILE - In this June 10, 2010 file photo, House Minority Leader John Boehner of Ohio speaks to reporters outside the White House in Washington following a meeting with President Barack Obama regarding the BP Deepwater Horizon oil spill. Crafting an agenda for the fall elections has not been easy for congressional Republicans, who, to solicit ideas, set up a Web site, soon flooded by liberals with distinctly un-Republican suggestions. Meanwhile some Republicans don't even agree that they need a new agenda at all. (AP Photo/Charles Dharapak, File) (Charles Dharapak)
--

House Minority Leader and would-be Speaker of the House John Boehner gave a wide-ranging interview to the Pittsburgh Tribune-Review. It was, perhaps, a little too wide-ranging. Boehner shared with the paper an exciting preview of what Republicans have in store for us, should they retake Congress.

"They're snuffing out the America that I grew up in," Boehner said. "Right now, we've got more Americans engaged in their government than at any time in our history. There's a political rebellion brewing, and I don't think we've seen anything like it since 1776."

Boehner, born in 1949, grew up in an America of high taxes, mass unionization and vast federal infrastructure and anti-poverty programs, along with segregation and pervasive racism, wars in Korea and Vietnam, and the constant threat of nuclear annihilation. Also there were "beatniks." It's unclear what aspects of that America the Democrats are attempting to snuff out, and which aspects are worthy of being saved from said snuffing.

Was the almost complete economic meltdown of the entire nation, the aftereffects of which are still hurting millions of people worldwide, actually no big deal? Sure!

Boehner criticized the financial regulatory overhaul compromise reached last week between House and Senate negotiators as an overreaction to the financial crisis that triggered the recession. The bill would tighten restrictions on lending, create a consumer protection agency with broad oversight power and give the government an orderly way to dissolve the largest financial institutions if they run out of money.

"This is killing an ant with a nuclear weapon," Boehner said. What’s most needed is more transparency and better enforcement by regulators, he said.

Boehner on the Oil Spill

Speaking of things that are no big deal -- and that, therefore, do not require a nuclear response:

Boehner said Obama overreacted to the BP oil spill in the Gulf of Mexico. The spill might warrant a "pause" in deepwater drilling, but Obama's blanket ban on drilling in the gulf -- which a judge overturned last week -- could devastate the region's economy, he said.

Boehner on War and Economic Security

The Social Security retirement age must be raised. To pay for our wars!

Ensuring there's enough money to pay for the war will require reforming the country's entitlement system, Boehner said. He said he'd favor increasing the Social Security retirement age to 70 for people who have at least 20 years until retirement, tying cost-of-living increases to the consumer price index rather than wage inflation and limiting payments to those who need them.

That will be, I'm sure, a very popular position.

So, to sum up: A Republican government will not "overreact" to oil spills or financial meltdowns, and will pay for endless, unchecked war on the backs of retirees. None of that is news, but I don't think they were supposed to say all that so explicitly.