In defense of "Twihards" 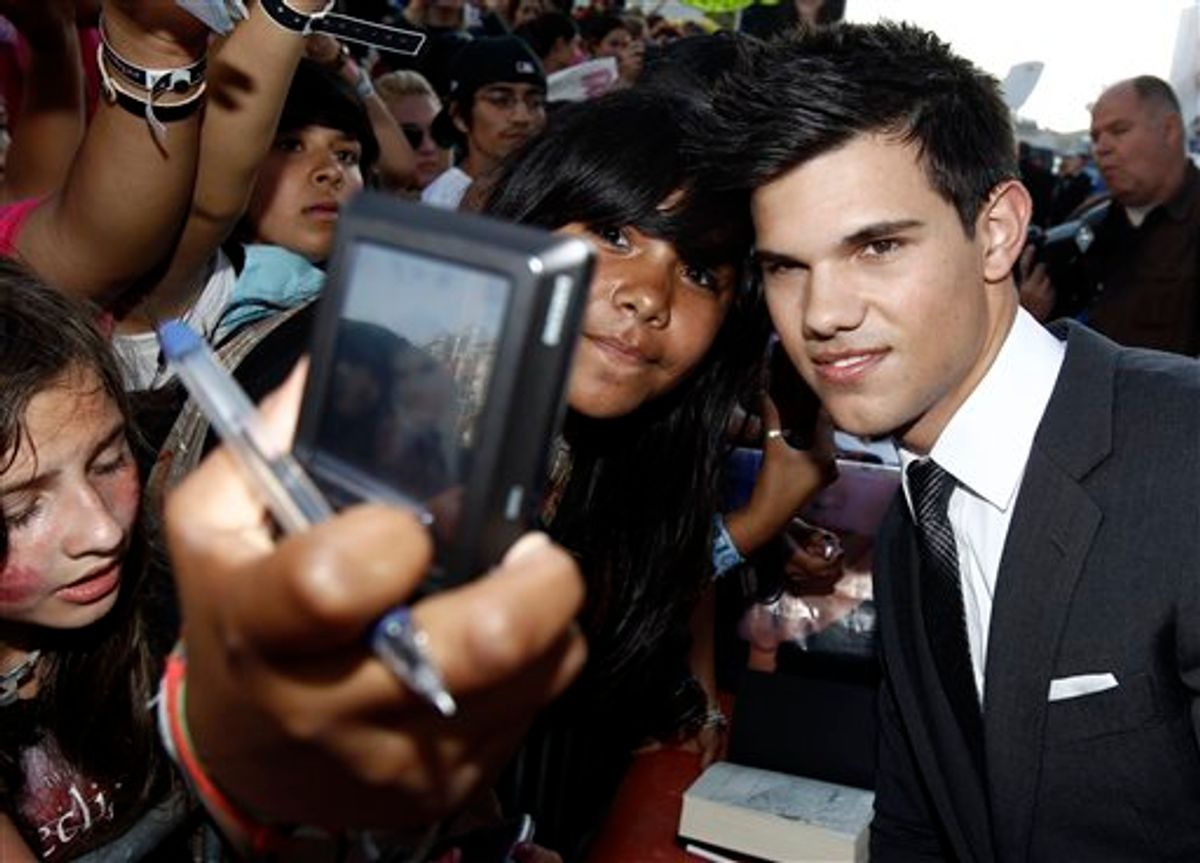 Taylor Lautner takes a photograph with a fan as he arrives at the premiere of "The Twilight Saga: Eclipse" on Thursday, June 24, 2010 in Los Angeles. (AP Photo/Matt Sayles) (AP)
--

Whether your awareness of the "Twilight" zeitgeist comes from casually perusing Sunday Styles or you've already staked your place in line to see "Eclipse" when it opens tomorrow, chances are you've got a pretty good mental picture of the insanely popular teen vampire saga's quintessential fan. She's definitely female, she's a little bit giddy, and she's either a teenager or she's not.

The fact that grown women -- some of them so grown they were introduced to "Twilight" by their daughters -- make up a sizable portion of the franchise's fan base is well documented. As of this writing, a Google News search for "adult Twilight fans" yielded 131 results from the past month. So far this week, there are articles charting the territory of "Intervention"-caliber "Twilight" addicts and the "Twi-mom" phenomenon -- and it's only Tuesday.

"They have web sites (twilightmoms.com), books ('Confessions of a Twilight Mom'), and a highly-visible presence at everything from the red carpet premieres to the tent cities of ticket-hungry fans," Gloria Goodale writes in the Christian Science Monitor. And in the Los Angeles Times, Christine Spines takes us into a seedy netherworld where a mother confesses to having watched each installment 300 times and a 50-year-old's marriage was nearly destroyed by her obsession. "Now I meet women every single day where 'Twilight' has become a major issue in their marriage," she says.

Who are these ladies of lust and laundry and what are they here for? According to the experts, they're drawn to the simple love story in a time of dissolving gender roles. Or maybe "Twilight" gets their endorphins surging like they have a new crush. Perhaps they fetishize youth and innocence. Or they relate to the post-9/11 condition of a threatening presence steeping invisibly in the suburbs.

All of which is well and good and probably at least partially true. But, so what?

Women love "Twilight." They love it the way they've always loved romance novels, supermarket tabloids, soap operas, and good old ear-to-mouth neighborhood gossip. Embedded in that list of of cliches about what women are drawn to and passionate about is probably a certain amount of truth for a certain amount of women, and one universal truth that's inarguable: Women have passions and interests. A variety of them, even! Why is it unusual that they express them en masse?

Gather several thousand screaming, grease-painted New Englanders in a stadium and what do you have? A Patriots game. Pitch a couple dozen tents outside an Apple store and what do we call it? A strikingly common upper-middle class affliction characterized by enthusiastic gadget consumption. Play Xbox until your eyes bleed and who are you? An American teenager. Now raise your hand if you lost sleep hitting refresh on FiveThirtyEight during the last presidential election or could be witnessed pumping your fist in the air in a pub before noon at any point in the last two weeks. I thought so.

We're a nation of rabid fans. We love loving things that other people love. We love loving things, period. This is no more or less true for women, be they suburban moms or anime geeks or something less easily reducible. But too often, media characterizations of the "Twilight" fan make them sound like something else: at best, idealistic, dreamy, eager to erase their boring chicken nugget reality with 90 minutes of vegetarian vampire fantasy, maybe a little shrill; at worst, hysterical, incompetent, insane, even dangerous. On an individual basis there are, no doubt, women who are these things. They're called extremists, and you'll find comparable examples in every other subgenre of society. As a mass -- that is, not the occasional rioting mob, of which any sporting event worth its admission price is capable of producing, but a cross-section of average American women from a variety of backgrounds and a functional level of fandom -- their behavior is ... really quite typical.