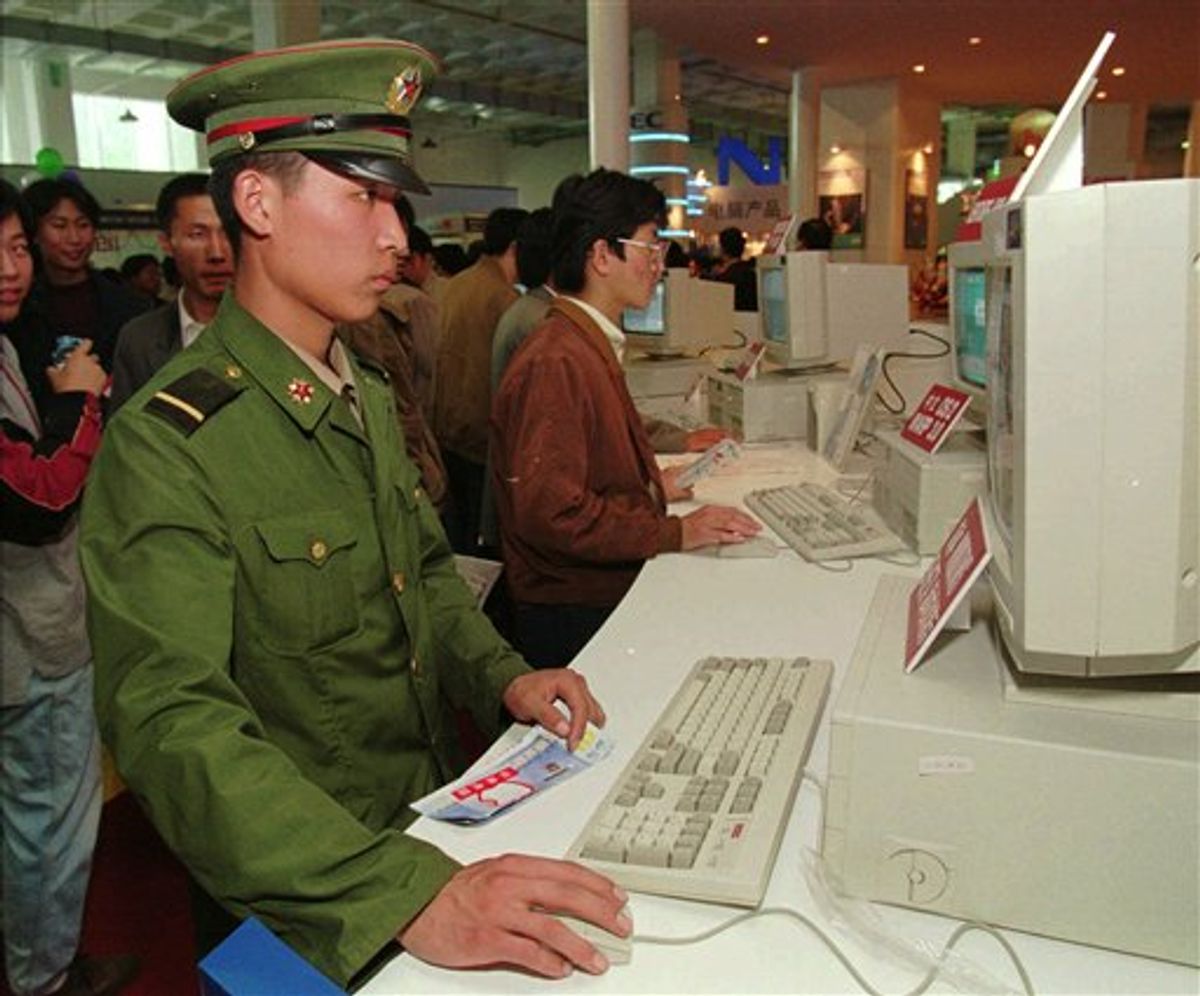 FILE - In this Oct. 10, 1995 file photo, a Chinese soldier tries out a desktop computer at a computer exhibition in Beijing. Rigid restrictions on Internet usage imposed this month on the 2.3-million strong Chinese armed services are sure to cramp the already lackluster social lives of the predominantly young, male force. Online dating was given the boot, along with blogs, personal websites and visits to Internet cafes. (AP Photo/Mike Fiala, File) (AP)
--

What will the lonely hearts of the People's Liberation Army do now?

Rigid restrictions on Internet usage imposed this month on the 2.3 million-strong Chinese armed services are sure to cramp the already lackluster social lives of the predominantly young, male force. Online dating was given the boot, along with blogs, personal websites and visits to Internet cafes.

It may seem harsh and out of touch, particularly for troops posted in remote regions of China who have little contact with the civilian world. But military experts said restraints are necessary to avoid compromising security for a Chinese military that prizes secrecy.

"Some soldiers leaked military secrets when chatting online, for instance, giving away troop locations. Certainly a large amount of secrets were revealed this way and the regulation has just blocked the hole," said Ni Lexiong, a military expert at Shanghai University of Political Science and Law.

Plus, Ni said, "matchmaking for soldiers can be conducted in more serious ways, such as through introductions from families, friends, or their work units."

China is just the latest country to wrestle with the sticky issue of Internet freedoms for its military, trying to find a balance between the demands of Web-savvy troops, who as civilians were used to sharing personal details online, and the need to maintain security.

After years of back and forth, the U.S. Department of Defense now promotes use of social media by everyone from privates on the front line to generals at the Pentagon as a way of spreading its message. For example, Adm. Mike Mullen, chairman of the joint chiefs of staff, has 20,000 followers on Twitter.

Most other countries fall somewhere in between.

"Cyberspace has been a gray area. This is a tricky issue because it straddles both personal and professional space," said Ho Shu Huang, an associate research fellow at the Institute of Defense and Strategic Studies at Singapore's Nanyang Technological University.

"The military is a reflection of society and how it responds will be a result of that. So in more closed societies, it's easier for the military to say, 'Don't do anything. Don't talk online. That's that,'" he said.

Countries such as Britain and Israel allow troops to post personal information online, as long as it does not compromise military operations. The open approach has not always worked for Israel.

The Israeli military scrapped a raid on a West Bank village earlier this year after a soldier revealed the time and location of the operation on his Facebook page. In 2008, a soldier attached to an elite Israeli intelligence unit was sentenced to 19 days in jail after uploading a photograph taken on his base to Facebook.

It was not clear if troops would be completely cut off from social networking sites. The regulations do not apply to civilians serving in military research and training academies.

It's also not known how authorities in China plan to enforce the restrictions. The regulations, posted on the Ministry of National Defense's website, did not say how troops would be punished for transgressions. Phones rang unanswered at the ministry's information office and questions submitted by fax were not answered.

Yet the prohibitions seem out of step in a wired society with 400 million overwhelmingly young Internet users in a country hurtling toward prosperity and global power.

"(The policy) is regressive in its understanding of technology, regressive in generational attitudes and regressive in transparency and attitudes we have of leading powers in the 21st century," said Peter Singer, director of the 21st Century Defense Initiative at the Brookings Institution.

Chinese social networking sites and instant messaging programs are wildly popular. Young Chinese office workers chat online with friends throughout the work day. Internet cafes in small towns are packed with youngsters playing games. Ni, the Chinese military affairs expert, said in the past soldiers had been allowed to visit Internet cafes in plainclothes and some had become addicted to the pastime.

The stipulation that troops cannot "make friends through the public media" is likely to be unpopular. In recent decades, rank-and-file soldiers often drawn from poorer rural families and until recent years paid miserably have found it hard to find spouses.

A blog apparently written by a paramilitary soldier which has not been updated since the new rules took effect on June 15 features a poem titled "We Are Still Single."

The Internet has been a boon, with a proliferation of unregulated online dating sites targeting military men.

The Chinese military now plans to attack that problem the way it did decades ago, when it arranged socials between military units and civilian work outfits with heavily female work forces such as textile factories. A report on a military news website said the Xigaze Military District in central Tibet is working with the local government and women's federation to help troops find partners.

Ho, the researcher in Singapore, said the restrictions are meant to prevent people from getting an inside look at the military. He said security lapses don't usually involve highly classified information, but rather small details that intelligence agents can use to piece together a larger picture about an operation or a unit.

"Most intelligence is based on really, really mundane stuff. History is replete with examples: the color of the sand, the types of uniforms they're wearing, the kinds of vehicles being deployed, the number of people and what they're wearing, whether they have facial hair, stuff like that," he said. "That's what militaries are concerned about, people piecing bits and pieces together."

(This version CORRECTS spelling of "compromising" in paragraph 3)