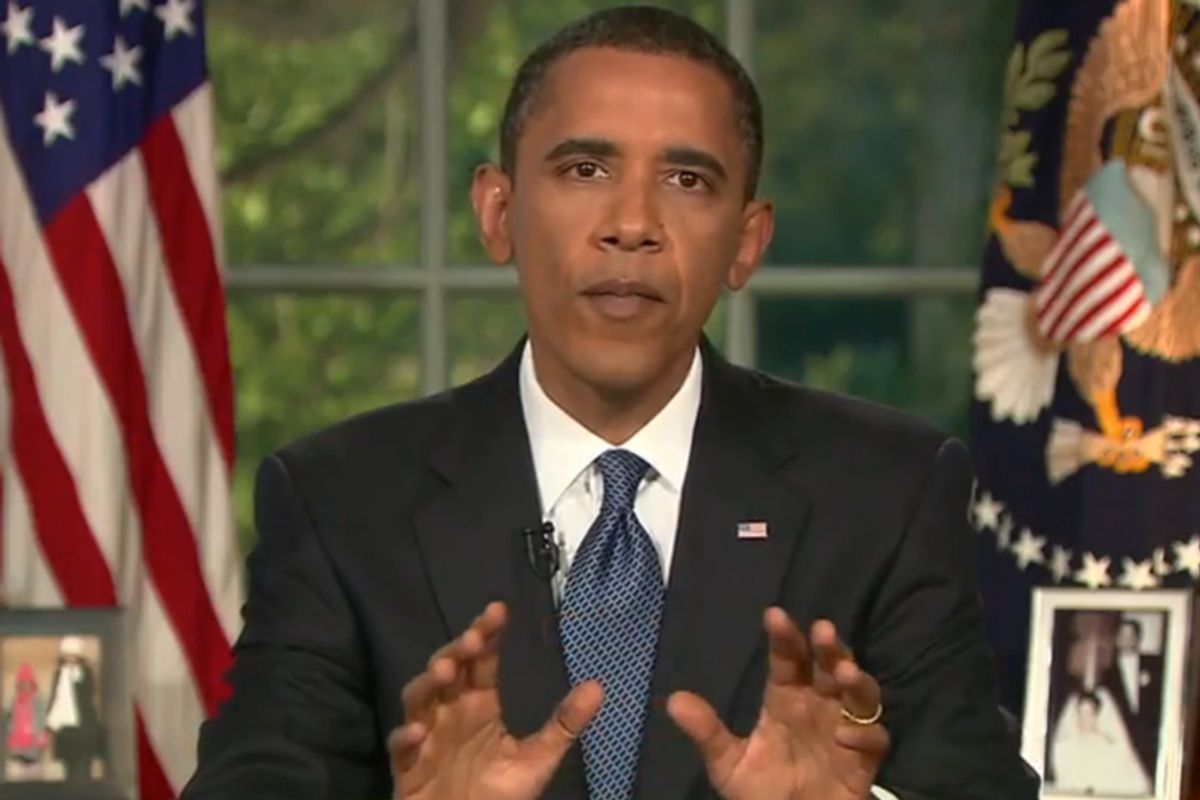 In today's Washington Post, Kathleen Parker calls President Obama a little girl in 732 words. Parker's column is titled "Obama: Our First Female President," and in it she argues that the President doesn't act like a man during times of crisis. Parker reminds us all that Toni Morrison called Bill Clinton the first black president, so she’s allowed to make this claim about Obama, except that her assertion makes no sense at all and is offensive to both men and women.

First, Parker says that "Obama displays many tropes of femaleness," but goes on to name just one: his communication style. Obama doesn’t talk like an Alpha male, she says. He is "a chatterbox," like all those ladies who love to babble and prattle and jabber and yak. On top of that, after the Gulf oil spill, he spent time "weighing" and "considering" what to do instead of immediately grunting like a caveman and head-butting Tony Hayward.

Parker acknowledges that she's talking about femininity and masculinity "in the normative sense," which means that she's oversimplifying everything. Shouldn't we all strive to communicate well, regardless of whether a particular strategy is associated with a particular gender? Is anyone's behavior ever 100 percent aligned with gender norms, anyway? No, but Parker shrugs and says that it’s just too hard to separate stereotype from reality. We want our leaders to be "normal." No girlie men in the Oval Office.

She insults women by saying that Obama blew it when it came to the oil spill by acting feminine, and insults men by making confining generalizations. She suggests that men generally can't "talk it out" or "cooperate with others." Instead they just "measure themselves against each other." Whip 'em out and get the ruler, boys.

Parker goes on to mention experts who study differences in communication styles. But when they talk about gender patterns, they're usually talking about women either conversing for an emotional connection or being less assertive. Women hedge more, saying "I think" or "I feel" more often than men and smiling politely in deference more often. But Parker focuses on passive voice constructions, which are commonly used out of laziness or to deflect blame. In his first speech on the oil spill, Obama used 13 percent passive voice constructions, but it seems that has more to do with poor grammar than communicating like a woman.

When Parker says she's talking about communication and passive voice, she's really just talking about passivity. Her real problem, as evidenced in the complaints she makes throughout the piece, is with Obama's reaction to the oil spill -- not the construction of his speech. All the references to "rhetoric" and statistics and researchers are irrelevant.

She claims she's "not calling Obama a girlie president," but goes on to say that he's "acting too much like a woman." Acting, not talking. And then, strangely, she concludes with a huzzah-for-girl-power: "And perhaps, next time will be a real woman’s turn." So, a delicate chatterbox who defers to others and hesitates to make big decisions?

Parker anticipates criticism and feigns innocence, claiming that she’s making her case "in the nicest possible way." That sounds pretty passive to me. Maybe her vision of a woman would say, "It seems that President Obama has been called feminine by some." But I’ll get manly about it: Kathleen Parker just called the president a pussy.