I am a Radical Homemaker failure

A new movement of canning, baking moms find inspiration in frugality. Me? I just hate it 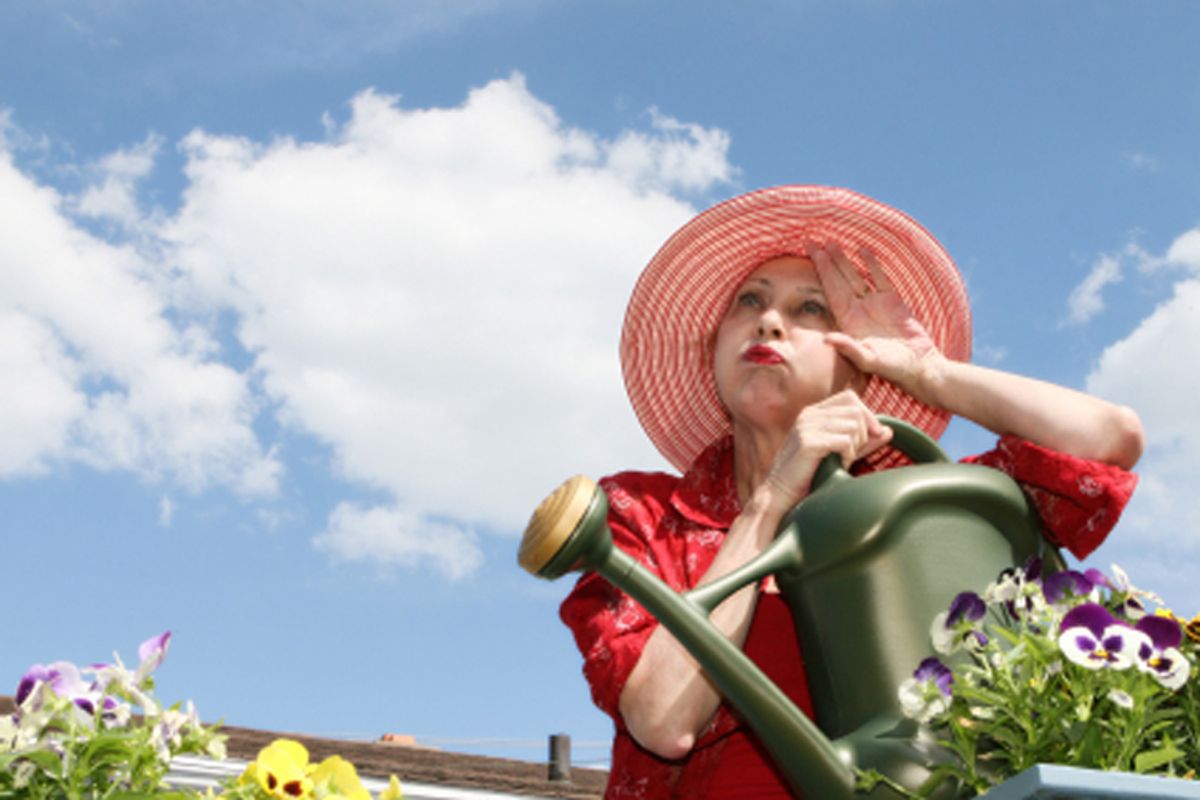 When my husband told me he wanted to fall back on his Ph.D. and start a career in academics, rather than continue earning piles of gold shoveling rocks for Satan, who was I to argue?

I had left my own short but nicely paid career, thanks to a paltry maternity leave and a too-long commute, in order to spend time with our daughter.

"The pay's pretty low," he said, before accepting his only offer, a year-long lectureship at a private university in the Midwest.

I picked up the phone and called U-haul.

After we settled, I looked for work but couldn't find childcare that made part-time work affordable. Instead, we cut back: no ballet, Kindermusik or swim lessons for the kid. No date nights or special gifts for us. We dressed in marked-down Old Navy and filled the car with gas just once a week. I missed my best friend's wedding.

We ate differently, too: We didn't go out, I cooked mostly from scratch, we bought ingredients in bulk. I made my own yogurt, thin and sour compared to the $4 buckets of organic plain that we liked.

I didn't know it eight years ago when we made this move, but spending less instead of earning more nudged us toward the Radical Homemakers movement, a group of educated men and women living as if money's not everything and working for The Man gets in the way of what is: relationships, health, freedom.

Shannon Hayes, a mother and wife with a Ph.D. in sustainable agriculture, explains this new breed of extreme Hausfrau -- which includes lots of men -- in her book "Radical Homemakers: Reclaiming Domesticity From a Consumer Culture." The title sounds a little like an Etsy vs. Goliath tale, but it's not all about shopping less and locally. More central to the Radical Homemaker agenda is the idea that we don't have to rely on nameless, faceless corporations to feed, clothe, shelter and entertain us. Instead, we can take ourselves out of an economy that requires endless hours of work while others raise our kids and chemists make our food -- all so we can go out and buy stuff that wrecks the planet. We don't need paychecks -- at least, not much of one. We might not even need health insurance. Instead, Radical Homemakers survive on home-grown food, old-timey skills and a willingness to help the neighbors.

No health insurance? Yeah, I wasn't so radical.

Hayes and her husband live in a converted shack (with a $170,000 solar-powered, multiroom extension) in Waterville, N.Y, where, along with her parents, they raise, process and sell grass-fed livestock on Sap Bush Hollow Farm. The couple grows almost all of their own food and uses the extra to barter for necessary services. Their income, around $43,000 a year, would be modest for a highly educated single, much less a family of four. Yet they get along just fine. It's not all lamb slaughters and hanging laundry, either. Hayes' family spent an enviable three months in France one winter and traveled to Brazil for research during another.

My family's $36,000 was tight and did not include a garden -- or France. I marveled at the fact that we managed. Also? I sort of hated it.

I hated the insecurity, that we weren't funding our retirements, or college or savings.

I hated being left behind. By then, our friends had settled into careers, started families, entered escrow. While they drove new hybrids all over town hunting down backsplashes for new Viking stoves, I was loading up on two-for-one gallons of milk or racing to the zoo before 9 a.m., where I had heard the parking lot attendant would wave me in for free.

In the drop-off line at preschool, tiny mothers climbed like mountain goats into SUVs the size of K2. Our lifestyle came off as quaint or quirky, and these moms sweetly waved down to me in our '97 Nissan Altima, the difference in altitude fitting.

Which is a terrible attitude for a borderline radical. Effecting change, Hayes writes, means "letting go of our attachments to employment, releasing ourselves from the pressure of the status race ... spending more time thinking about what we can do rather than what we can acquire." I quietly punished myself for not trying harder to find a job, any job, which could have doubled our bottom line and silenced the voices in my head that called me a freeloader. Or worse? A housewife.

Hayes, on the other hand, thinks even Betty Friedan would approve: According to her, Radical Homemakers show what "domesticity can look like in an era that has benefited from feminism; where domination and oppression are cast aside, where the choice to stay home is no longer equated with mind-numbing drudgery, economic insecurity, or relentless servitude."

Entangling family with green living and quality of life is exactly what gets on the nerves of French feminist Elisabeth Badinter. In her not-yet-translated book, "Le Conflit," she accuses today's new mothers of falling for eco- and bio-mumbo jumbo. They willingly breast-feed their kids, give birth at home, leave careers and forgo conveniences like disposable diapers and painkillers during labor. The modern baby, she writes, is "the best ally of masculine domination," love-struck mothers accomplices in their own demise. It's reminiscent of author Linda Hirshman's 2006 book-length admonishment, "Get to Work," in which she urged mothers to hold on to hard-fought gains for women in the workplace and end that ridiculous "opt-out revolution," New York Times writer Lisa Belkin's term for Ivy League-degreed new moms walking out of the firm to go play in the sandbox.

For Hayes, masculine domination is beside the point: Americans (men and women) are oppressed by corporations, money, things, ourselves. Radical Homemakers -- Ivy League degrees and all -- are the real opt-out revolutionaries. They have a far bigger purpose than Belkin's infamous subjects ever considered: family, community, planet and social justice.

But the work. Oh, the work! Not spending money is an incredible amount of work. I had considered -- sometimes seriously -- canning produce as a way to keep costs down. Canning is a common theme in Hayes' book. Just thinking about putting up a winter's worth of green beans and apricot jam, though, made me want to take a nap. Even baking all of my own bread sounded dreadful. For me, kneading dough was the physical manifestation of pushing and pressing all of life's ambitions into one yeasty ball of carbs.

Living on the cheap is exhausting, mentally and emotionally. I don't mind going without. But for what you do need? That takes planning. It takes so much time.

I enrolled our daughter at a co-op preschool, where, in exchange for low tuition, I wiped down toilets, attended endless meetings and worked several five-hour shifts a month. I spent hours on Craigslist -- and days of follow-up -- to find a suitable coffee table. Meanwhile, Crate and Barrel had the perfect one in stock. Finding a new shirt to meet up with an editor turned into a soul-crushing ordeal, since I shopped nowhere but Target and Old Navy.

Real Radical Homemakers, Hayes makes clear, approach things differently. They would simply borrow a shirt, build a coffee table, embrace the kneading. They'd call in for backup to help with the beans. Radical Homemakers would give preschool goat-moms the finger. No, wait, they wouldn't send their kids to preschool in the first place! Really, they're much stronger people than me. They'd never whine about Crate and Barrel.

"It's temporary," my husband would remind me, temporary and good. We had learned to emphasize family not things, books and board games, not cable TV.

But it wasn't temporary. I had another baby. Eventually, we moved to Southern California, where my husband had been offered a permanent job. Though he was offered significantly more -- and I was earning a few bucks freelancing -- our move coincided with a housing bubble that forced us into the kind of rentals we hadn't seen since graduate school: stained carpeting, neighbors who threw all-night parties and pit bulls. Lots and lots of pit bulls.

"We've moved backwards," I sometimes think. Our high-earning, home-owning days are nearly a decade behind us, our 40s staring us in the face.

"But we're happy?" my husband offers.

Not exactly. What I am is ambivalent. In the last few years, even mainstream culture has been all about green living, hyper-locavorism, Michael Pollan and his five ingredients. Even the biggest corporations attempt to tread lightly on the planet -- BP being a notable exception. Really, there's never been a less embarrassing time to drive a '93 Ford Festiva, which I sometimes do. The economic meltdown has made frugal living fashionable, purposeful and much less quaint. But go radical? I just can't.

I wasn't raised on a farm (Hayes was), and I've never kept a basil plant alive from one caprese salad to the next. I don't trust myself with a bread starter, much less livestock. Imagining total reliance on a backyard farm makes me cry for my starving children. I am comforted by our growing 401K. And I can't help it: A little piece of me dies when I notice the baby sitter drives a nicer car than us.

Hayes has an answer for my reluctance: Radicalizing one's homemaking is a process. First, you renounce (Satan's not the boss of me! Fuck Crate and Barrel), then you reclaim (you learn how to can). Finally, you rebuild, which means convincing others to radicalize, too. No one gets there overnight. Or, in my case, ever. I'm sure I'm not the only one.

Like a majority of Americans, I'll always prefer direct deposit to getting paid in chicken eggs. I'm comfortable with the smile-and-wave relationships I have with most of my neighbors. While I share the Radical Homemakers' family, environmental and social justice values, the way they propose bringing about change requires too much of the kind of work I frankly don't want to do. I'm fine giving up stuff. But I can't imagine spending afternoons rendering fat and lacto-fermenting cucumbers. That would be too much like shoveling rocks, even if it wasn't for Satan.

Madeline Holler is a writer and mother of three living in Long Beach, Calif. She is a regular contributor to Babble.com's Strollerderby blog.