The political website, discovering serious problems with its pollster, comes excruciatingly clean with its audience 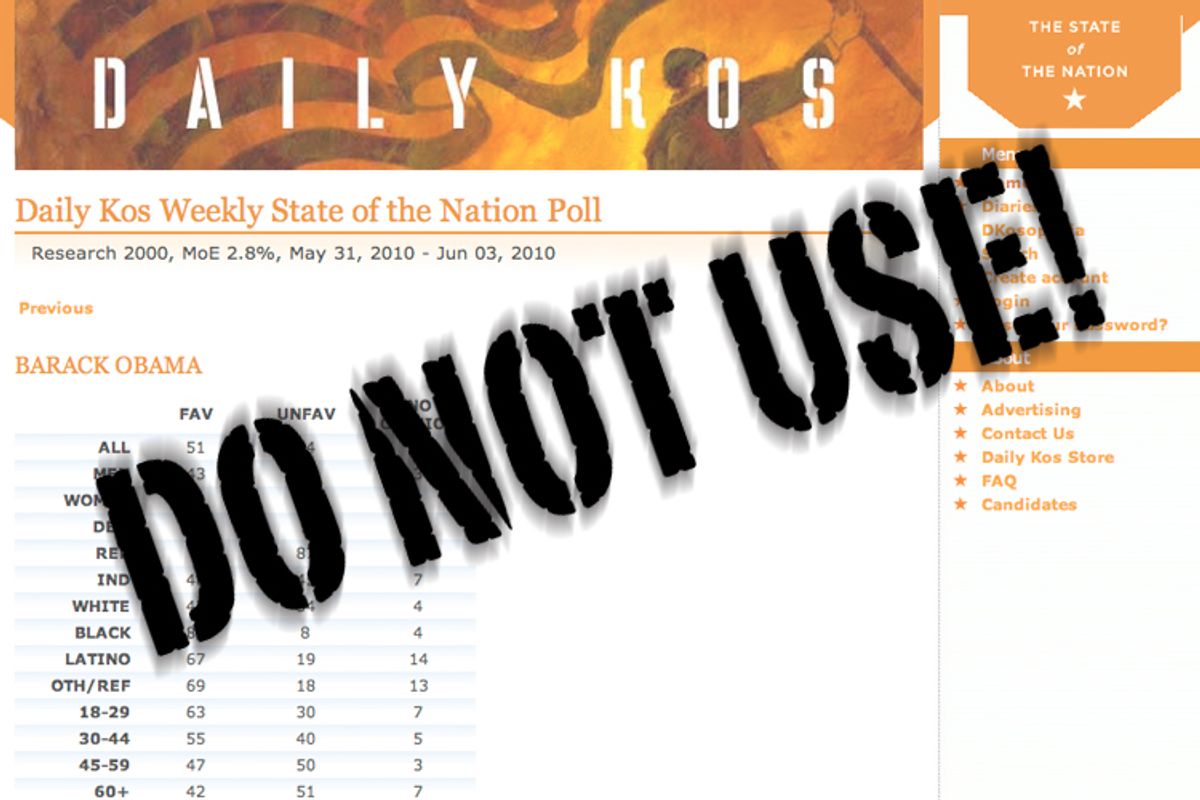 Here's how Markos Moulitsas started a post yesterday at the Daily Kos:

I have just published a report by three statistics wizards showing, quite convincingly, that the weekly Research 2000 State of the Nation poll we ran the past year and a half was likely bunk.

If there's a Mother of All Corrections, this comes pretty close. When the proprietor of a well-known and widely followed media organization brings something this awful to the attention of his audience, and in such a forceful and prominent way, he's doing something fairly rare -- and noteworthy.

My survey research and statistics skills aren't strong enough to vouch for what the statistics wizards came up with, but the redoubtable Nate Silver is doing just that. In short, there is a huge problem -- and that's the best possible construction -- in this data.

The Atlantic's Max Fisher has an excellent aggregation about the fighting, legal and otherwise, surrounding this debacle. Lots of it, as you'd expect, is purely political, unsurprising given the Daily Kos mission. I suspect this will be a case study worthy of a masters thesis.

I cannot imagine a traditional media organization -- and more than a few have used this pollster -- showing the same level of transparency that Markos has done. (Speaking of transparency, I should note that Markos is a longtime friendly acquaintance.) I can only imagine how he must have felt when he learned of the problems with the polling.

It's what he did next that matters here: He gathered facts and then issued, in excruciating detail, a report to his readers.

Let's be clear on one thing: If, in fact, Daily Kos has been running fraudulent polls the past several years, the site has taken a credibility hit, a serious one. But that doesn't mean I'm about to delete the site from my browser bookmarks or RSS feeds, and the main reason I won't do so is that the site is being so up-front about what happened.

Media organizations have traditionally been among the most opaque of institutions. Trust us or don't, they've said in the past -- and what they've meant was, you can take what we say as The Truth. That's no longer good enough, not that it ever was, and the smarter ones are opening up, though the notable examples tend to be exceptions, not the rule.

The more honest we are about our errors, and we all make them, the more we may feel we're letting people assume that what we do is flawed. Well, in journalism and other fast-moving media, what we do often is flawed. The best we can do is to try hard to follow the other principles of journalism that include accuracy and thoroughness, and then own up, fast, when we get it wrong.

For those of us creating media, genuine transparency will lead audiences to believe us less. That's fine, because healthy audience skepticism is the first principle of smart media consumption.

But transparency will also lead people to trust us more. That's not a paradox.

A longtime participant in the tech and media worlds, Dan Gillmor is director of the Knight Center for Digital Media Entrepreneurship at Arizona State University's Walter Cronkite School of Journalism & Mass Communication. Follow Dan on Twitter. More about Dan here﻿.﻿﻿