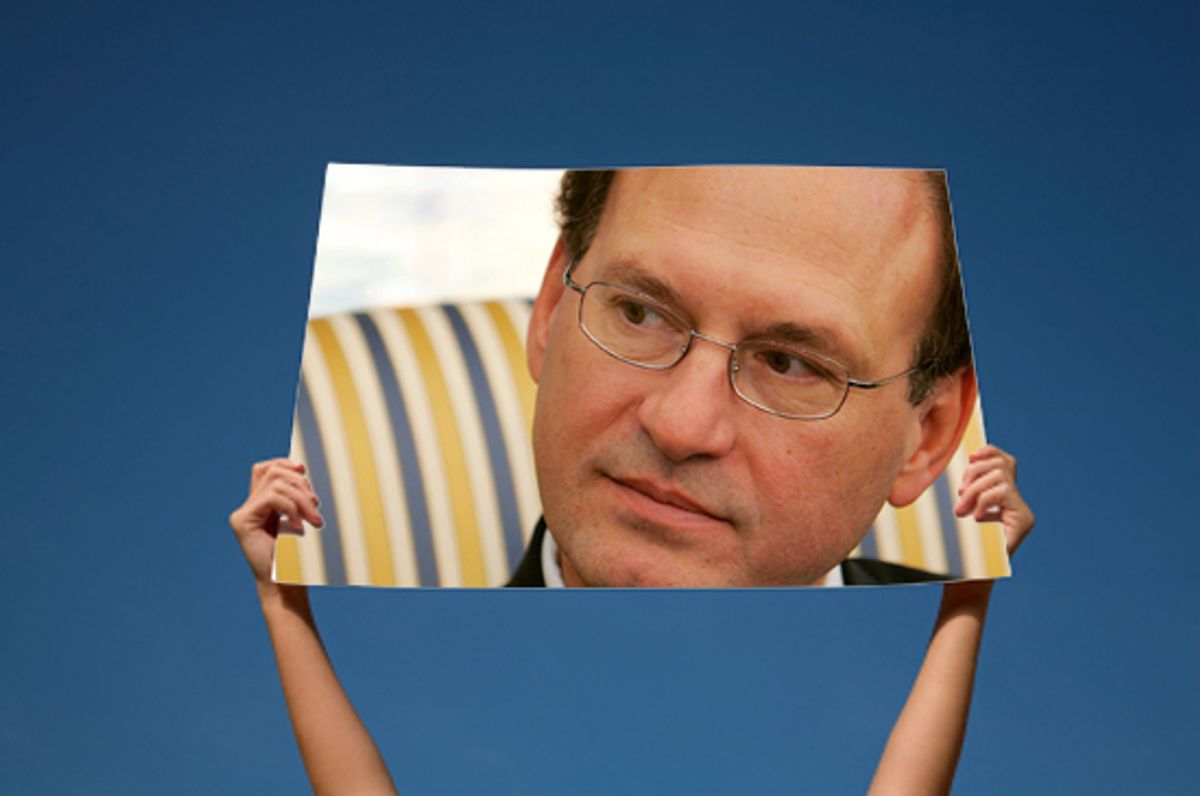 Since the days of Barry Goldwater, the idea that ordinary, law-abiding Americans are culturally and physically besieged has been a central tenet of the conservative belief system. Today, this notion animates the loose confederation of groups known as the Tea Party, whose members seem to harbor an inchoate sense of rage against intellectual, East Coast elites, along with a belief that the American way of life is faced with some kind of unspecified existential threat.

On Monday, these views found an echo in a surprising place: the Supreme Court, where Justice Samuel Alito is quickly becoming the Tea Party movement's most prominent judicial face.

In his most significant opinion to date, Alito wrote that an individual’s right to bear arms cannot be abridged by states or cities. The ruling, which was decided 5-4, reads less like a technical legal analysis than a paean to guns as a guarantor of all other rights: "The right of the citizens to keep and bear arms has justly been considered as [the primary protector] of the liberties of the republic" because it "offers a strong moral check against the usurpation and arbitrary power of rulers."

In less clinical terms, the idea is that a government is less likely to violate your rights if it knows that you might shoot its representatives. Or, as Sharron Angle, the Tea Party-backed Nevada GOP Senate candidate, put it in a radio interview several weeks ago: "Our Founding Fathers, they put that Second Amendment in there for a good reason, and that was for the people to protect themselves against a tyrannical government." (She added that she hoped that "Second Amendment remedies" wouldn’t be necessary.)

That notion is troubling as the central premise for any piece of legal analysis, but even odder is the narrative that Alito tells to support it, a story that relies almost exclusively on the horrors suffered by African-Americans during Reconstruction. In Alito’s tale, the popular consensus after the Civil War was that the way to safeguard the freedoms of African-Americans was to grant them gun rights. Not to pass more rigorous legal protections, not to deploy the muscle of the federal government to see that federal rights were being respected, but instead to give African-Americans guns so that they could shoot their oppressors.

Embedded in this historical scholarship is a Tea Party-approved lesson that firearms are needed because of a government that is feckless at best and dictatorial at worst. In the minds of most people, those might be statements of unfortunate historical fact; in Alito’s apparent view, the threats from government and general lawlessness are sufficiently imminent and grave that they justify applying today the lessons from the most violent time in American history.

Other portions of the opinion betray a Tea Party-esque concern that American values are at risk of subversion by foreign influences. At one point, Alito remarks somewhat peevishly that the only relevant question is whether a particular right is fundamental to "our scheme of ordered liberty and system of justice," not whether it exists in any foreign society (emphasis Alito’s). At other points he stresses the exclusive importance of "American tradition" and the "American perspective." This judicial concern resembles the political anxiety, borne on signs at Tea Party rallies from coast to coast, that Obama and a Democratic Congress are attempting to remake America in the image of Western European (or, even more fantastically, Leninite Russia).

In a separate opinion also released on Monday, Alito likewise adopts a common pose of political conservatives: a peculiar notion of victimhood where aggressors become the aggrieved. That case held that a law school was within its rights to deny recognition to a student organization, the Christian Legal Society, that refused to accept members who engaged in "unrepentant homosexual conduct." Alito, dissenting, wrote that the real victim was the Christian student group, which was being punished by that conservative bête noire, the "prevailing standard of political correctness." Where others saw an evenhanded attempt to enforce a non-discrimination policy, Alito saw a belief system under attack. (In another case from this term, Alito showed concern for the signers of a Washington state anti-gay-rights referendum, who could, if their names were disclosed, suffer the same "widespread harassment and intimidation suffered by supporters of California’s Proposition 8.")

None of this is to say that Alito is in any sense a political hack. (John Paul Stevens, for example, called his opinion in the gun rights case "careful and scholarly.") In many ways, Alito has gotten a bad rap, which the "Not true" flap has not helped. He is as analytically rigorous as anyone on the court, less caustic than Antonin Scalia or John Roberts, less prone to jurisprudential wackiness than Clarence Thomas, and more genuinely modest -- judicially, at least -- than any of the three. He is, though, more apt than his conservative brethren to let the language of the current political patois leak into his opinions. That voice (today, anyway) belongs to the Tea Party, a group to which Alito, as an older, Republican, married, and well-educated white male, is well-suited, demographically. And though it’s uncomfortable to see the mantras of a fringe group echoed in significant rulings on constitutional rights, it is a helpful reminder that the utterly neutral arbiter of the law, the umpire in John Roberts’ metaphor, is mostly a legal fiction.