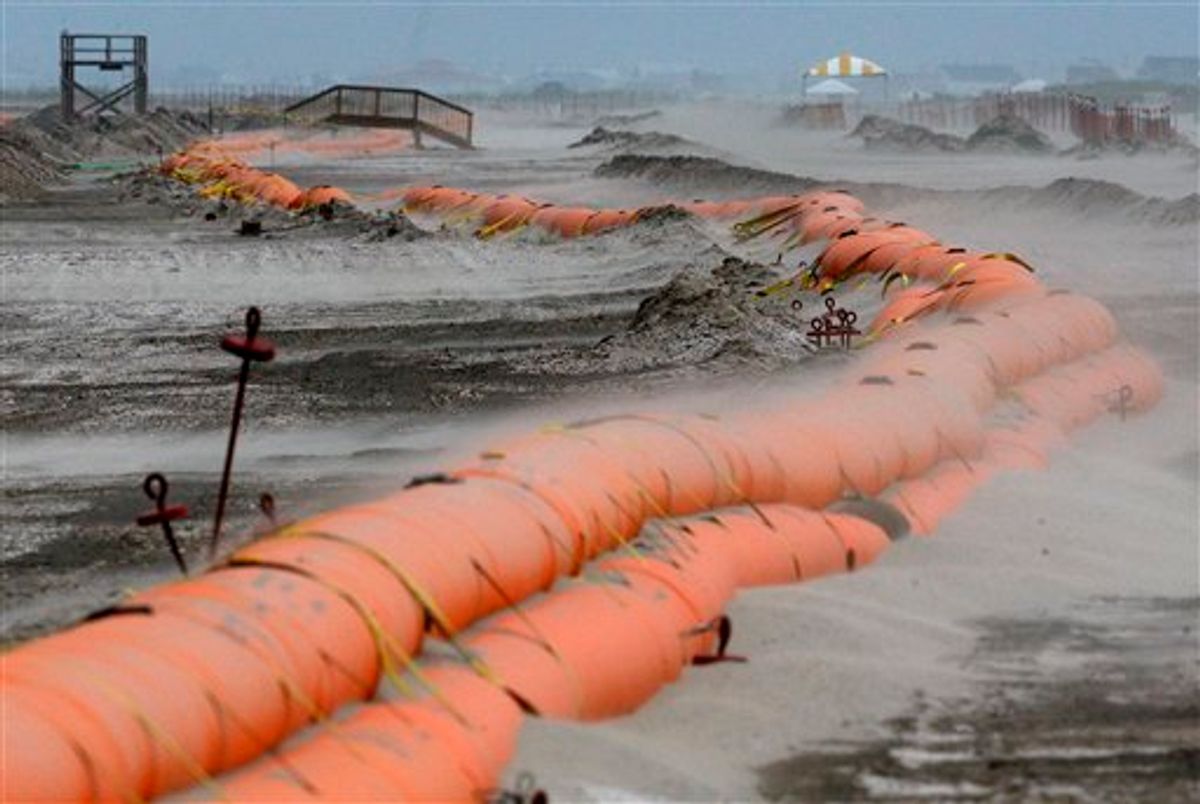 Sand blows across a tiger dam on a beach as the outer edges of Tropical Storm Alex approach the Louisiana coast in Grand Isle, La., Tuesday, June 29, 2010. The dam is expected to protect the island's beaches from oil that washes ashore from April's Deepwater Horizon oil rig explosion and spill in the Gulf of Mexico. (AP Photo/Patrick Semansky) (AP)
--

The hurricane was churning coastal waters across the oil-affected region on the Gulf of Mexico. Waves as high as 6 feet and winds over 25 mph were forecast through Thursday just off shore from the Mississippi Delta in Louisiana to the Florida Panhandle.

In Louisiana, the storm pushed an oil patch toward Grand Isle and uninhabited Elmer's Island, dumping tar balls as big as apples on the beach.

"The sad thing is that it's been about three weeks since we had any big oil come in here," marine science technician Michael Malone said. "With this weather,we lost all the progress we made."

The loss of skimmers, combined with gusts driving water into the coast, left beaches especially vulnerable. In Alabama, the normally white sand was streaked with long lines of oil. One swath of beach 40 feet wide was stained brown and mottled with globs of oil matted together.

Dozens of vessels that were being used to combat the oil spill were tied to docks Tuesday as Alex, more than 500 miles away, approached the Texas-Mexico coast. Most days, the fleet would have been skimming oil from the Gulf and ferrying workers and supplies. But the hurricane turned many people fighting the 11-week-old spill into spectators. And they will be for days.

Officials scrambled to reposition boom to protect the coast, and had to remove barges that had been blocking oil from reaching sensitive wetlands. Those operations could soon get a boost. The U.S. accepted offers of help from 12 countries and international organizations. Japan, for instance, was sending two skimmers and boom.

Alex is projected to head for the Texas-Mexico border region and stay far from the spill zone off the Louisiana coast. It is not expected to affect work at the site of the blown-out well. But the storm's outer edges complicated the cleanup.

Early Wednesday, Alex had maximum sustained winds near 80 mph (130 kph). The National Hurricane Center said the Category 1 storm is the first June Atlantic hurricane since 1995. It is on track for the Texas-Mexico border region and expected to make landfall Wednesday night.

Skimming efforts off the coasts of Louisiana, Florida, Alabama and Mississippi had mostly stopped.

At the main staging area for oil cleanup efforts around Grand Isle, stacks of boom, bottled water, ice chests and cleaning materials stood ready to load up when the work restarted.

Brothers Otis and Vahn Butler of Houma got there jobs just three days ago.

"I like the work," Otis Butler said. "We've been steady busy until today. Now we're mostly standing around and looking around. We just find things to do when we can today. But once this is over, I bet we'll be twice as busy."

Scientists have said the rough seas and winds, though, could actually help break apart the oil and make it evaporate faster.

"It's good news because there is less on the surface," Higgens said. "It's surface oil that washes up on the beaches."

On the beach, cleanup workers struggled with wind that blew sand into their eyes and mouths and humidity that let the sand stick to their skin.

Jefferson Parish Council member Chris Roberts said the oil was entering passes Tuesday at Barataria Bay, home to diverse wildlife. A day earlier, barges that had been placed in the bay to block the oil were removed because of rough seas. Boom was being displaced and had to be repositioned, he said in an e-mail.

The Bureau of Ocean Energy Management, Regulation, and Enforcement said 28 platforms and three rigs in the path of the storm in the western Gulf have been evacuated. Still in the water are vessels being used to capture or burn spewing oil and gas and those drilling relief wells that officials say are the best hope for stopping the leak for good.

Hurricane warnings were posted for parts of the coast along Mexico and Texas. Except for the border area itself, though, most of the warning area is lightly populated.

So far, between 70.8 million gallons and 137.6 million of oil have spewed into the Gulf from the broken BP well, according to government and BP estimates. The higher estimate is enough oil to fill half of New York's Empire State Building with oil.

More containment help could be arriving after the storm lets up. Mexico, Norway, Holland and Japan are providing skimmers; Canada is providing containment boom; and Croatia is pitching in with technical advice. Only one offer has been rejected, according to the chart. Dispersant chemicals offered by France are not approved for use in the U.S.

The U.S. rarely faces a disaster of such magnitude that it requires international aid, though it did accept assistance after Hurricane Katrina.