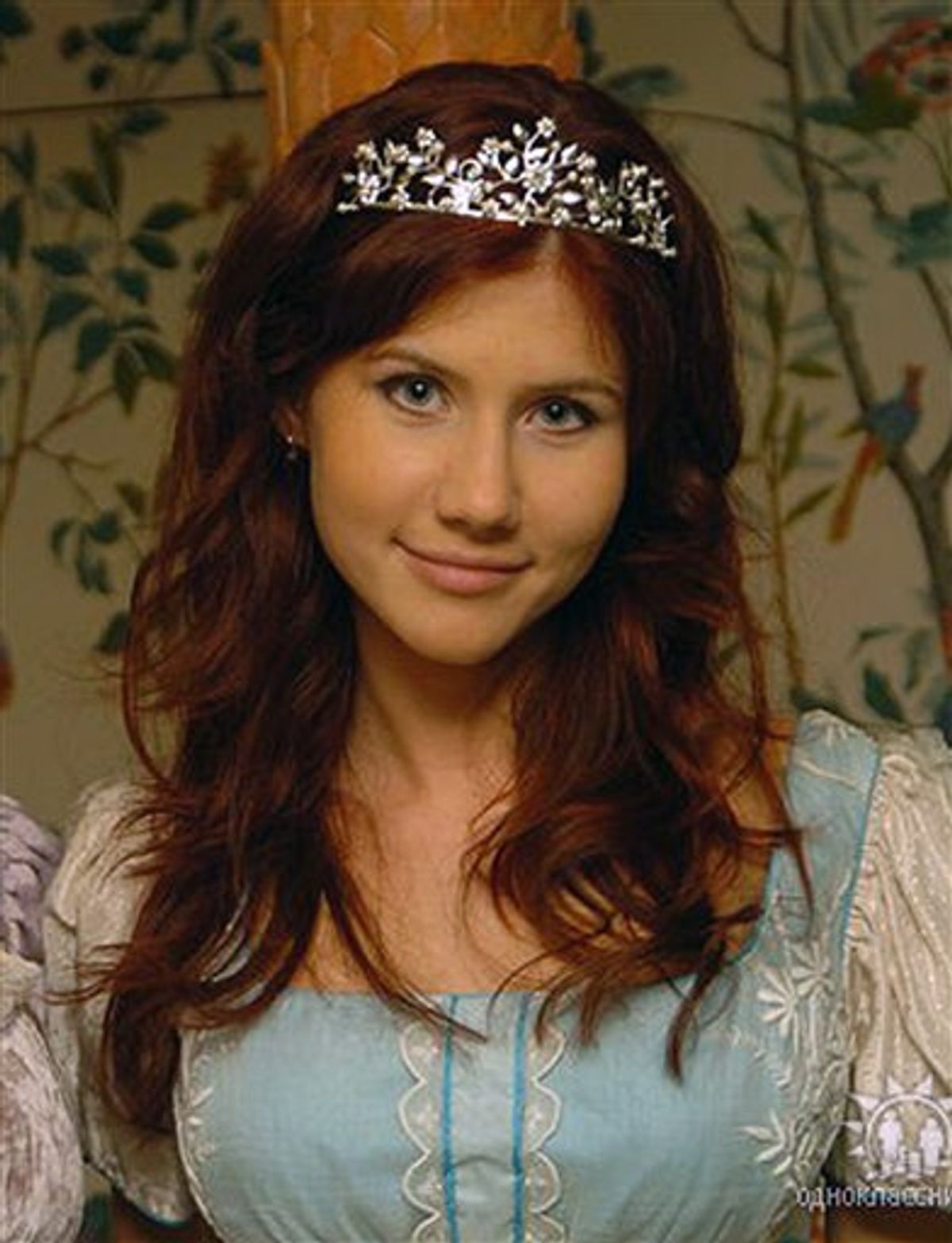 This undated image taken from the Russian social networking website "Odnoklassniki", or Classmates, shows a woman journalists have identified as Anna Chapman, who appeared at a hearing Monday, June 28, 2010 in New York federal court. Chapman, along with 10 others, was arrested on charges of conspiracy to act as an agent of a foreign government without notifying the U.S. attorney general. The caption on Odnoklassniki reads "Russia, Moscow. London, Stone age." (AP Photo) (AP)
--

Anna Chapman has been called the femme fatale of a spy case with Cold War-style intrigue -- a striking redhead and self-styled entrepreneur who dabbled in real estate and mused on her Facebook page, "if you can dream, you can become it."

The 28-year-old Chapman, they say, was a savvy Russian secret agent who worked with a network of other operatives before an FBI undercover agent lured her into an elaborate trap at a coffee shop in lower Manhattan.

Though the U.S. has branded the operatives as living covertly, at least in Chapman's case, she had taken care to brand herself publicly as a striver of the digital age, passionately embracing online social networking by posting information and images of herself for the world to see.

Prosecutors have charged Chapman and 10 other suspects with following orders by Russian intelligence to become "Americanized" enough to infiltrate "policymaking circles" and feed information back to Moscow.

Assistant U.S. Attorney Michael Farbiarz has called evidence against Chapman "devastating." She is "someone who has extraordinary training, who is a sophisticated agent of Russia," he said.

Her mother, who lives in western Moscow, said she is convinced of her daughter's innocence.

"Of course I believe that she's innocent," Irina Kushchenko told The Associated Press. She refused to comment further.

Chapman and nine others accused of being ring members were arrested across the Northeast and charged with failing to register as foreign agents, a crime that is less serious than espionage and carries up to five years in prison. Some also face money laundering charges. An 11th suspect was arrested in Cyprus, accused of passing money to the other 10 over several years.

Prosecutors said several of the defendants were Russians living in the U.S. under assumed names and posing as Canadian or American citizens. It was unclear how and where they were recruited, but court papers said the operation went as far back as the 1990s. Exactly what sort of information the agents are alleged to have provided to their Russian handlers -- and how valuable it may have been -- was not disclosed.

The FBI finally moved in to break up the ring because one of the suspects -- apparently Chapman, who was bound for Moscow, according to court papers -- was going to leave the country, the Department of Justice said Tuesday.

The court papers allege that some of the ring's members were husband and wife and that they used invisible ink, coded radio transmissions and encrypted data and employed methods such as swapping bags in passing at a train station.

Farbiarz called the arrests "the tip of the iceberg" of a conspiracy by Russia's intelligence service, the SVR, to collect information inside the U.S. The arrests raised fears that Moscow has planted other couples.

Such deep-cover agents are known as "illegals" in the intelligence world because they take civilian jobs instead of operating inside Russian embassies and military missions.

Russian officials initially denounced the arrests as "Cold War-era spy stories" and accused elements of the U.S. government of trying to undermine the improving relationship between Moscow and Washington. But the White House and Russian Prime Minister Vladimir Putin expressed confidence that the arrests would not damage ties between the two nations.

At a court hearing Monday in federal court in Manhattan, where Chapman was jailed without bail, her attorney called the case against her weak. He said she had visited the United States on and off since 2005 before settling in Manhattan to start a business.

Chapman took an apartment a block from Wall Street and began using online social networks, including LinkedIn and Facebook, to develop business contacts and to market her skills. On her LinkedIn page, Chapman is listed as the chief executive officer of PropertyFinder Ltd., which maintains a website featuring real estate listings in Moscow, Spain, Bulgaria and other countries.

Biographical information on Chapman on the Lifenews.ru website said she was the daughter of a Russian diplomat, who at one time worked in Kenya. It said she moved to Britain after marrying a Briton whose father was Europe director for Auchan, the French supermarket chain, which operates many stores in Russia.

She lists previous jobs at an investment company and a hedge fund in London. The summary also says she earned a master's degree in economics at a Russian university in 2005.

In more than 90 photos posted to Facebook, Chapman is pictured in various countries, including Turkey, where she is in one of the rooms of the luxurious Hotel Les Ottoman, in Istanbul. There are also what look like family photographs from Russia and photographs of her dressed in a student uniform.

Her Internet footprints also include a photo of her posing with a glass of wine between two men at the Global Technology Symposium at Stanford University in March -- it cost more than $1,000 to attend -- and video clips, speaking in Russian about the economic opportunities in her adopted home.

Media reports quickly branded her a femme fatale, and tabloids splashed her photos on their front pages.

"There's nothing too crazy about her that I knew of," he said.

A criminal complaint alleges that, unbeknownst to her business contacts such as Hantman, Chapman was using a specially configured laptop computer to transmit messages to another computer of an unnamed Russian official -- a handler who was under surveillance by the FBI.

The laptop exchanges occurred 10 times, always on Wednesdays, until June, when an undercover FBI agent got involved, prosecutors said. The agent, posing as a Russian consulate employee and wearing a wire, arranged a meeting with Chapman at a Manhattan coffee shop, they said.

During the meeting, they initially spoke in Russian but then agreed to switch to English to draw less attention to themselves, the complaint says in recounting their recorded conversation.

"I need more information about you before I can talk."

The undercover said he knew she was headed to Moscow in two weeks "to talk officially about your work," but before that, "I have a task for you to do tomorrow."

The task: To deliver a fraudulent passport to another woman working as a spy.

"Are you ready for this step?" he asked.

The undercover gave her a location and told her to hold a magazine a certain way -- that way, she would be recognized by a Russian agent, who would in turn confirm her identity by saying to her, "Excuse me, but haven't we met in California last summer?"

But Chapman was leery, prosecutors said.

"You're positive no one is watching?" they say she told the undercover agent after being given the instructions.

Afterward, authorities say, she was concerned enough to buy a cell phone and make a "flurry of calls" to Russia. In one of the intercepted calls, a man advised her she may have been uncovered, should turn in the passport to police and get out of the country.

She was arrested at a New York Police Department precinct after following that advice, authorities said.

In a video clip on a Russian website focused on investment in hi-tech start-ups, she talks about her ambitions to create a venture fund that would invest in projects in Russia and discusses the business opportunities offered by New York.

"Nothing has excited me more in life than the number and level of people I have met here. This place is full of ideas," she said in Russian.

"I'm trying to create a project that would connect two capitals -- New York and Moscow -- the two most important cities for me in the quest for ideas," she says.

Asked how someone new to business can meet the right people in New York, she says, "America is a free country, and it's the easiest place in the world to meet the most successful people. ... Here you can go out for dinner with your neighbor and meet a top venture capitalist."

Authorities say the undercover's parting words to her had been, "Your colleagues in Moscow, they know you're doing a good job. So keep it up."

Contributing to this report were Associated Press writers Pete Yost in Washington, D.C., and David Caruso and Eva Dou in New York and Nataliya Vasilyeva, David Nowak and Vladimir Isachenkov in Moscow.