Obama won't live up to his word on immigration

The president's speech today called for reform, but the administration's efforts won't address the real problem 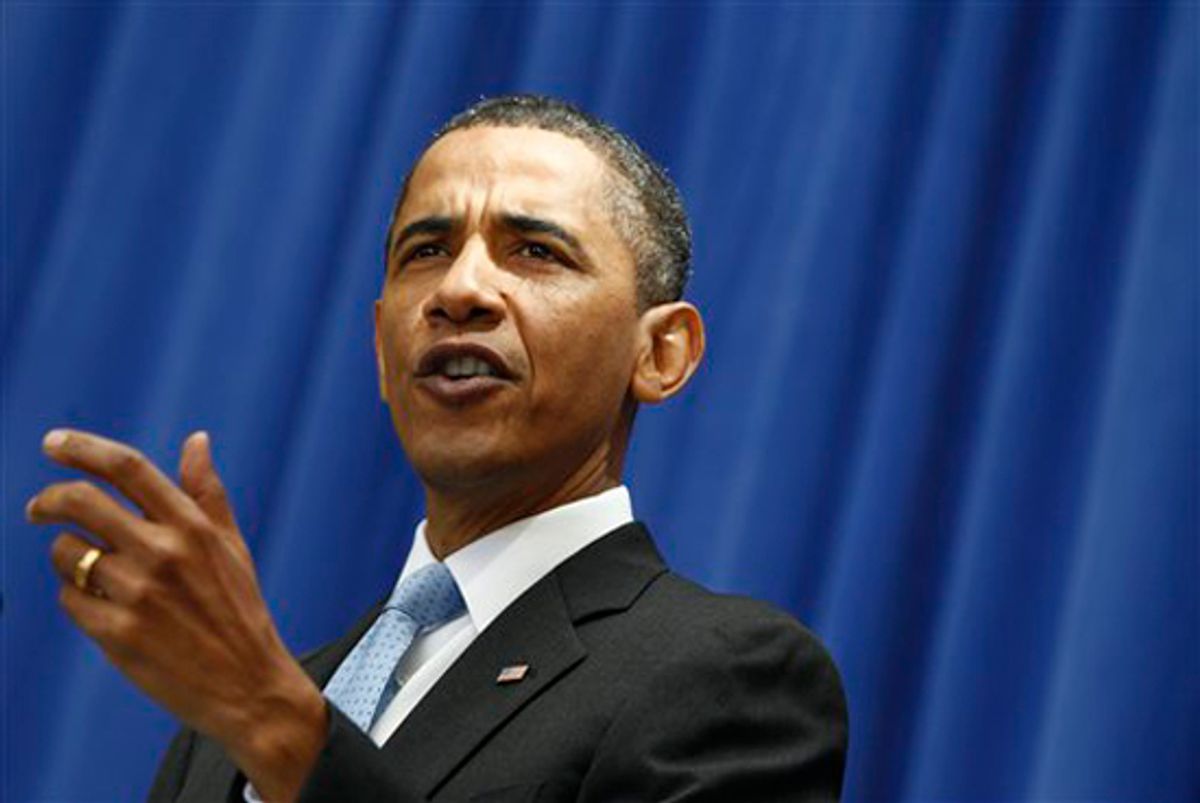 President Obama gave a major policy speech today encouraging immigration reform (without outlining what exactly he thinks that will mean). Speaking at American University (nice optics), he talked about finding a "middle ground" between expelling all illegal immigrants and granting them all amnesty, and about the need for border security. It sounds like the White House strategy will be to bring the bill up after November, when the lame-duck Congress won't have to worry so much about getting re-elected (sure).

Finding "a path to legal status" for immigrants currently in the United States is certainly an important goal; strengthening the border is certainly an important political goal. Yet the signals from the White House before this week have been iffy at best and troubling at worst about which one of these points President Obama and his team will pursue with the most diligence. I already expect the pattern of health care reform and banking reform to be repeated: liberal desires (amnesty!) will be tied to a conservative selling point (border security!); amnesty will get watered down, while the conservative side will get beefed up, and, in the end, no Republicans will vote for the damn bill anyway.

Here, though, we're not talking about the future -- health care being phased in, or a bank tax being created to stave off subsequent crises -- but the present. There are at least 11 million people living "illegally" in America, working in America, paying American sales tax, dreaming of sending their (often American) children to American schools so that they might, one day, realize the American dream. They are every day subjected to a kind of wait-and-see horror: Will they be pulled over tonight? Will they need to provide identification to get treatment at a hospital? Will they make enough to send some money back home?

What America needs to decide is what the punishment should be for coming to this country without the appropriate paperwork. For most of our history, the punishment has been a life of hard work. Sometimes, as in the case of the Chinese and Irish immigrants tricked and drafted into building the intercontinental railroad, the punishment has been deadly work. Increasingly, the suggested punishments come very close to wishing for some kind of government-backed death sentence. Just listen to the cheers being raised by Governor Jan Brewer, R-Ariz., about the predator drones the United States is about to deploy at the border.

Take yourself back a couple of generations. What would have happened if the early United States had simply shot people on sight as they neared the U.S. border? I doubt I'd be here today. I doubt very many in the Midwest -- settled largely by pioneers who couldn't find work, because of immigration status, or because they'd come from agragrian-based cultures, elsewhere -- would be here either.

Whatever legislation comes from this push, it will, I predict, address only the symptoms of the nation's actual immigration illness. We're the number-one consumer of cocaine in the world, and yet the violence that our demands spark in foreign countries -- the violence that makes Mexican citizens want to flee north -- seems to us a distant problem for which we bear no responsibility. There have been three political assassinations in the last two weeks in Mexico. Ninety percent of the weapons used by the drug gangs there come from the United States. Still, all our political conversations about immigration discuss the issue as though it is a singularly south-coming-north problem, never as though we're part of the problem.

We pride ourselves on our liberty and democracy. Yet, we teach our children the values of oligarchy, being more willing to stand up for big bankers than we are for the poor and hungry at our doorsteps. Instead of providing foreign aid to our neighbors, we provide guns.

Let's hear a speech about how to fix that.