Judges show their claws on "SYTYCD"

UPDATED: An overdue elimination, and the producers decide to change up the format. Again 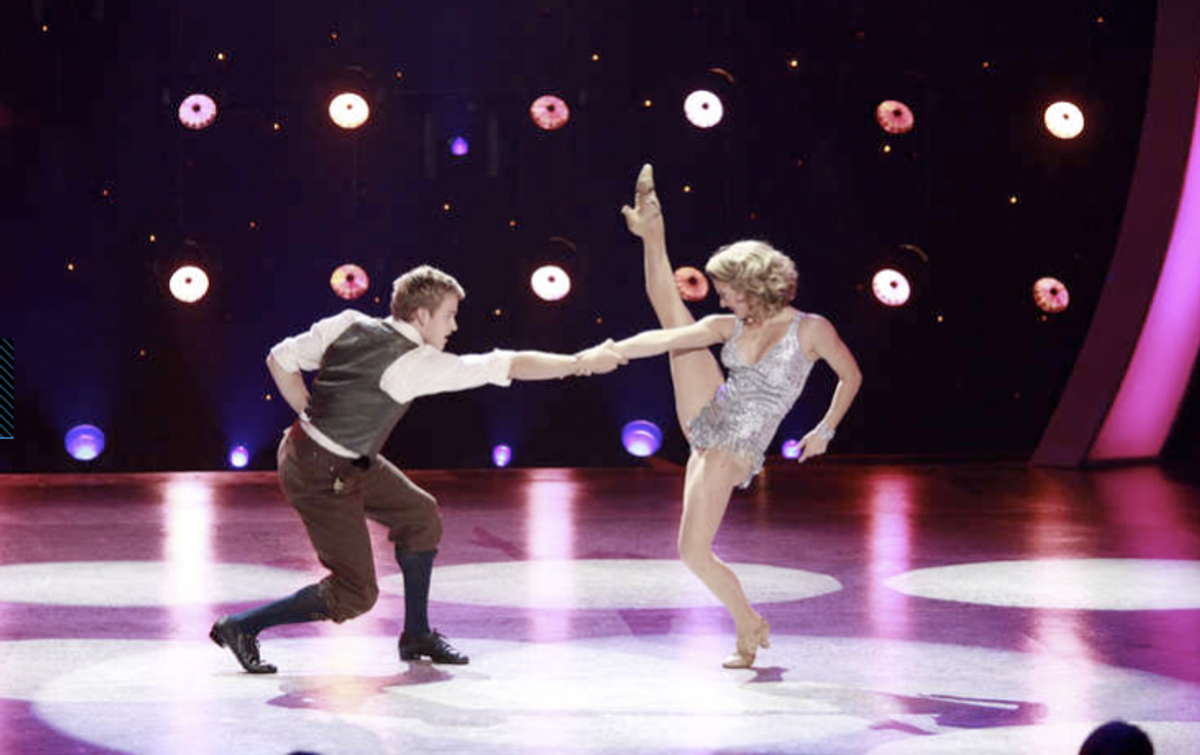 Neil Haskell and Lauren Froderman do Broadway on "SYTYCD"
--

Last week I went on and on about Melinda being given a pass during elimination over the super-charming ballroom dancer Cristina. I stand by that. But for Melinda to be told, to her face, "we made a mistake letting Cristina go" after she successfully unhooked her ridiculous dress mid-step and shook her little Colombian (really?) ass off, well, that's a bit nastier than I usually like to see on "So You Think You Can Dance." It felt like Mia Michaels just couldn't stop herself from saying it, and she should have, no matter how true it was. Half the bad in Melinda's salsa routine was the sexy-but-compact Pasha and his inability to lift a girl who's over 5'3". She was indeed the worst of the night, and I don't think it's a stretch to say she's going home (for real) this week, but she earned her spot on the show and deserved more respect than that.

So for the second week in a row I find myself perturbed by the judges, although we were closer to the same page this time. We were in the same book, at least. But they seem to relish nitpicking the amazing dancers to death (who's Billy gotta sleep with to get some positive feedback?) and letting others coast on their smile and ability to fake it. If I hear "you've got charisma!" or "we love just watching you!" directed at Jose one more time I'm going to stab myself in the ear with a pencil. Give the dude some constructive criticism -- he's not growing as a dancer at all with the judges holding him to such a low standard. Make. Him. Better.

And Jose did alright this week, even if he (like Kent) wasn't man enough for his partner. Also just alright: Ashley and her All-Star Adé. Their contemporary piece (by first-timer Dee Caspary) was a bit too floppy-ragdoll for my tastes, with too much hair in her face, but I nodded my head when Mia called her "a cut above the female dancers." And the first drop with Adé catching her right above the floor was stunning. Another routine that was pretty OK, the Robert and Courtney jazz piece, was really only memorable because of the shirtlessness and the guyliner. I love boys with makeup. And Robert is, like Sonya Tayeh said, "dynamically beautiful," even with his clothes on, but what she gave the dancers to work with was anticlimactic.

Lauren was the victim of costume FAIL during her Broadway routine with Neil, when her strap broke and only double-sided tape kept her incredibly perky breast from flying out. She maintained composure, she had charm and sass, despite not having Ashley's lines or legs. The judges even name-dropped the most heavenly of all the Astaire/Kelly-era dancers, Cyd Charisse. Sorry Ginger Rogers. And I decree, from here on in, Joey Dowling will choreograph any and all Broadway routines. Tyce is out. She gives dancers languidity I didn't know they had.

I think "SYTYCD" can also ditch Mandy Moore, as one commenter on Salon noted after last week's show, because she managed to give Bitty-Baby Kent an awkward piece that he obviously didn't feel confident doing, despite her efforts to teach him to "walk like a man." And the judges were hard on Kent this week, rightfully so, taking note of his tendency to play to the audience and forget the girl in front of him. The kid from Wapakoneta and his "hungry jazz face" are getting swept up in the love and screaming girls and forgetting that he needs to actually dance. Kent is in zero danger of going home, so let's hope getting knocked down a couple pegs will make him focus.

Most improved dancer on Wednesday night was, hands down, Adechike. I haven't been feeling him, and he's not going to win, but he was looser than I've ever seen him, he was more fliratious with Lauren than with any previous partners, and had funk in him that shocked me. I figured Adechike out, why it is he wasn't connecting with people in earlier performances -- he's not an outsized personality, and he's not good at faking it, with overly-tortured forehead wrinkling or a toothy grin and a wink. He's subtle. He's got to bring the BLAM! though, if he wants to stick around.

Poor Billy can't get a break. He draws contemporary, his own style, this week and still can't get any love from the judges. They were harsh with him, nary a word of praise beyond the obligatory "you're an amazing dancer," followed by "but..." and then blah blah blah. And you know what? Screw them. They're crazy. They're high. Billy and Kathryn performed my favorite contemporary routine of the year so far, inducing chills and tears and prompting me to rewind my DVR for the first time this season. Billy lifted Kathryn with more ease and grace than Pasha lifted Melinda, and look at him! He's wee! From his face to feet Billy was right there.

The second time I rewound my DVR this season was for Alex "G-Money" Wong. Choreographers Tabitha and Napoleon were trepidatious about schooling the classically trained Alex, which is how "I'm hoping it's so Wong it's right" got tossed out by Tabitha. Hell, Alex almost cried at the thought of being paired with hip-hop master Twitch.

And then he blew the doors off. Alex f*#king Wong laid down some serious shit, keeping up with one of the best, and I was totally. Floored. You can't fake hip-hop, you know? It's not like fudging ballroom if you're a jazz dancer or vice versa. Think about Alexie's hip-hop with Twitch in the first week of competition and how soft and cutesy it was. Think about Billy's white-ass krump last week. Alex didn't pull punches -- he slapped on his gangsta face and busted out some New Jack Swing.  The attitude was there, the hits were there and the choreography was playful and perfect. Unreal.

Things I learned this week: boys can easily dance with other boys, so the show should stop making a big deal about it. With the girls getting picked off, the guy All-Stars will be out of work soon, so bring on the same-sex dancing. The solos are back, thankfully -- we need them to make truly educated decisions about the competitors. Choreographer Dave Scott is an intimidating kind of beautiful. He makes me sweaty. I love Cyndi Lauper, but I never want to hear her version of "Unchained Melody" again. I think Alex has a short neck, because during his solo it always looks like he's got his shoulders up at his ears. And no way I could ever buy Robert choking anyone, no matter how much edgy eyeliner he has on. Good effort though.

Oh yeah -- if you doubt my "heavenly" assessment of Cyd Charisse, watch her dominate Fred Astaire in "The Band Wagon" from 1953. Whoa.

UPDATE: At least Melinda's pain was relatively short-lived. The inevitable became, uh, evitable with her elimination, but it was sweet of the Robert and Billy to look like they were remotely worried it'd be their "greatest hits" montage up on the big screen. And with that we're down to eight, just in time for the show to throw a new monkey wrench into season 7's gears. The producers are abandoning all pretense of randomness next week by purposefully selecting an All-Star for each contestant, one he or she has never danced with before. The performers will then dance a second routine, paired with one of the other finalists. Maybe it's because of the shortage of female dancers, or the success of the Twitch/Alex boy-on-boy action, or because union guidelines dictate that each All-Star get an equal amount of screen time. Who knows. I'm biting my tongue until performances. Rolling with the punches.

What else: I haven't been wowed by a group number since the Robson's garden party in week one. This week the dancers (except for Alex) did zero justice to Jamel Gaines's work and "O Fortuna" has never felt less goosebumpy. Sigh. Cat's suggestion that Billy and Robert arm wrestle was met with a squeak from me on the couch. I love the idea of All-Star flashbacks, and revisiting some of their greatest work live is lovely. Mark and Courtney doing "The Garden" reminded me why I loved Sonya Tayeh's twistedness three seasons ago. The "Viva Elvis" productions was fun and charming, although the marching band-step routine at the beginning was the best part. Ne-Yo's backing track was wicked distracting. And because I can't get enough, watch Alex and Twitch bring the pain: