How bad 3-D is ruining movies 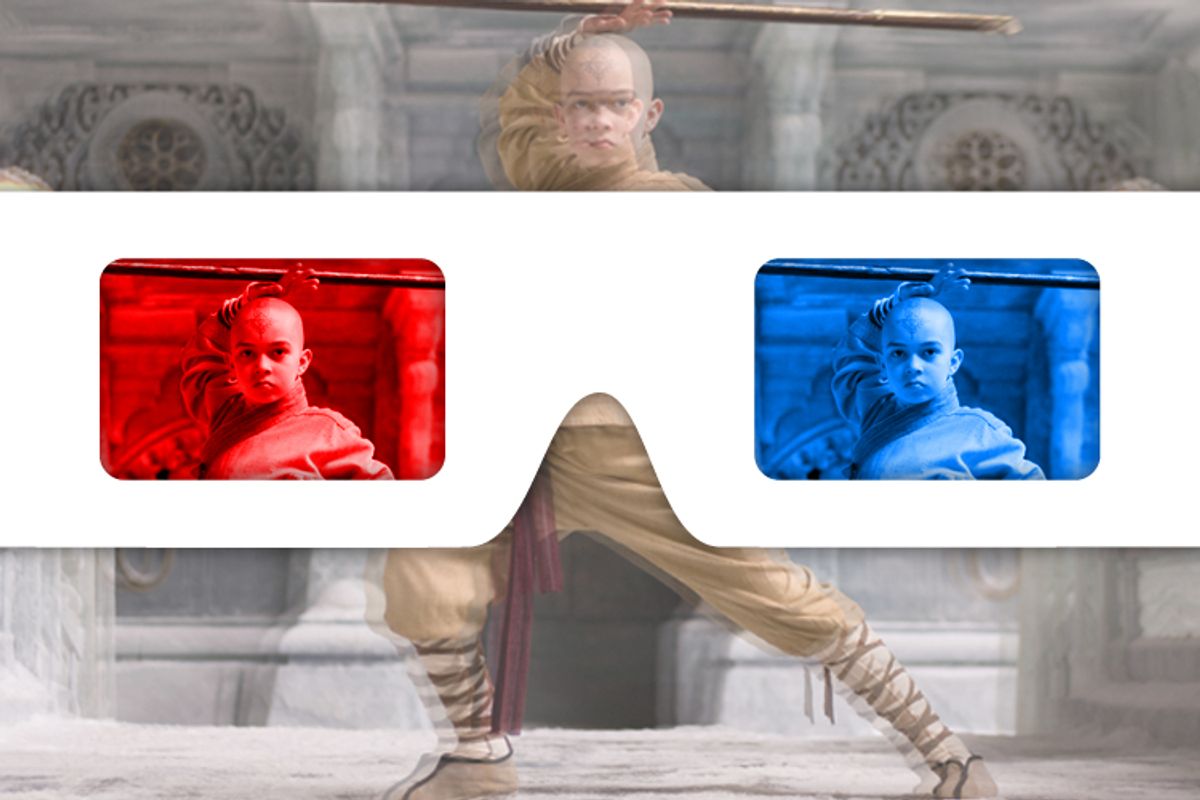 Before M. Night Shyamalan’s "The Last Airbender" was unveiled to preview audiences on Tuesday night, the controversy surrounding the movie was mainly focused on its one-dimensional casting. But once critics and audiences got their hands on the film, the debate shifted to a different issue of depth: the movie’s postproduction conversion to digital 3-D.

The reaction to "Airbender," which was shot in 2-D and retrofitted to take advantage of the booming 3-D market, was instant and vehement. Criticisms of the movie as dark, blurry and borderline unwatchable led off many major reviews. Roger Ebert, who has waged a one-man jihad against the process, wrote in a withering half-star pan that the movie "looks like it was filmed with a dirty sheet over the lens." Movie bloggers who savaged the after-the-fact 3-D applied to "Clash of the Titans" in March repeated their attacks with renewed force.

The complaints were twofold: first, that the 3-D is barely noticeable as such, and second, that what little it adds is grossly overshadowed by the permanently dim and smeared picture that persists throughout the film. While some of the purely computer-generated images, like a shot of a massive Fire Nation warship chugging toward the lens, do register an increased sense of depth, many others have the look of bad green screen, with haloed figures floating against an indistinct background. The darkened picture renders parts of the climactic night battle almost unintelligible.

This kind of critical drubbing for a popcorn movie is nothing new, and given that more than half of "Titans'" opening-weekend box office came from the 28 percent of theaters showing it in 3-D, the movie studios are unlikely to let a few bad notices change their course. DreamWorks Animation CEO Jeffrey Katzenberg, the head cheerleader for the new processes, has been forthright in pitching 3-D as a cash cow for the turbulent industry. A 3-D movie, Katzenberg argues, delivers a "premium experience" for which exhibitors can, naturally, charge premium prices. Even better, since the effect can’t be duplicated at home, 3-D forces Netflixing audiences back into theaters, and the stereoscopic image has the added advantage of being impossible to bootleg.

The trouble is that it’s not just critics who are catching on to the industry’s tricks. Ebert’s review, which says that "Airbender" "puts a nail in the coffin of fake 3D," was retweeted more than 100 times (after that, Twitter stops keeping track), and as the word from Wednesday’s midnight screenings filtered in, the tide of opinion grew blacker and more poisonous. On Thursday morning, a Twitter search for "Airbender 3D" was still dominated by comments like patdaddy10’s "damn I hella want to go see airbender in 3D." But among those who’d actually seen the film, the sentiment was overwhelmingly negative. Jacob Linder from Columbus, Ohio, commented, "Airbender was absolute dog shit in 3d." Emma Malone, a self-proclaimed "small-town girl" and NASCAR fan, summed up: "Epic. Freaking. Fail. I cannot believe I just spent $14 on you and your crappy 3D."

Arthur Moy, an I.T. worker from Wilmette, Ill., had high expectations for "The Last Airbender" based on his love of the animated series from which it was adapted, and says he is generally a fan of the new 3-D, citing James Cameron’s "Avatar" as "3D done right." "Airbender," by contrast, had "the worst implementation and use of 3D of any movie in 3D I have ever seen." The postproduction effects, he wrote via e-mail, felt "tacked-on, gimmicky and under-used overall." Grettir Asmundarson, a father of two from Orem, Utah, tweeted that the 3-D “Airbender” was like "watching it with a pair of black pantyhose pulled over your head."

Bad word-of-mouth by itself won’t stem the tide of low-rent 3-D. Although Paramount would not disclose how many of "Airbender's" 3,000-plus screens were dedicated to the "premium experience," anecdotal evidence from New York and Los Angeles, among other cities, suggests that audiences in upscale areas were having difficulty locating 2-D screenings. A listings search turned up exactly one non-3-D theater on the island of Manhattan; ditto Santa Monica.

Even Katzenberg, who compares the new 3-D to the coming of sound, has warned of the dangers of cheapo three-dimensionalization; subpar releases risk killing the golden goose. At the Seoul Digital Forum in May, "Avatar’s" James Cameron said that "creating only good 3D content will be critical to swelling the market, as bad experiences will only make audiences wary of spending next time." Michael Bay, at work on "Transformers 3," put it more succinctly, "You can’t just shit out a 3D movie."

Nevertheless, 2-D conversions continue apace: From "Harry Potter and the Deathly Hallows" to "Cats and Dogs: The Revenge of Kitty Galore," the summer slate is filling up with movies grabbing for a piece of the three-dimensional pie. Unless audiences are willing to skip movies altogether, chances are they’ll keep shelling out extra for 3-D — not because they want to, but because there’s no alternative.