A U.S. church and its "kill the gays" partner in Uganda 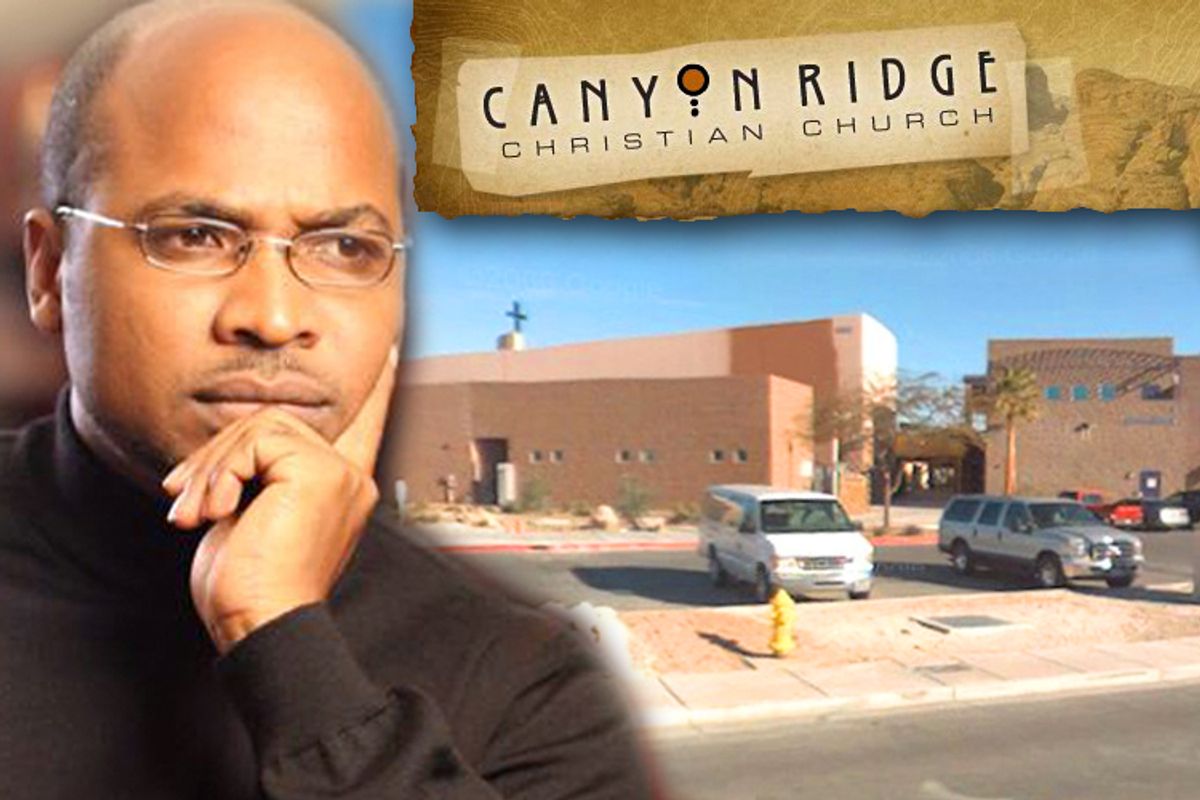 Pressure is mounting on a Nevada megachurch to end its financial support of one of the key backers of Uganda's notorious "kill the gays" bill. But so far, the Canyon Ridge Christian Church in Las Vegas is standing by Martin Ssempa, who has said that gays like to "eat da poo poo" and boasted of his efforts to "make sure that sodomy and homosexuality never sees the light of legality in this land of the pearl of Africa."

Canyon Ridge's resistance comes even as the Willow Creek Association, a massive global network of evangelical churches that includes Canyon Ridge, distances itself from Ssempa. The WCA bestowed a "Courageous Leadership" award on Ssempa's Kampala-based Makerere Community Church in 2007, but on Thursday, the group said that it no longer has a relationship with Ssempa and that it wouldn't have honored his church had it been more fully aware of his views.

But Canyon Ridge, which considers Ssempa a "mission partner" and helps pay for staff at his Kampala church, is digging in its heels. After promising in early June to review Ssempa's involvement in Uganda's anti-gay movement, pastors Mitch Harrison and Kevin Odor said last week that they "do not believe Martin Ssempa to be the man the media and others have portrayed him to be."

The "kill the gays bill" is officially known as the Anti-Homosexuality Bill (AHB), and its stated mission "is to establish a comprehensive consolidated legislation to protect the traditional family by prohibiting any form of sexual relations between persons of the same sex." Penalties include life in prison for any same-sex intimacy, with the death penalty authorized for "serial offenders" and consensual sex among HIV positive gay people. The bill requires an HIV test, presumably to differentiate penalties. Jail time and fines could be given if one even knows someone who is gay and fails to report it to authorities. During the February National Prayer Breakfast, both President Obama and Secretary of State Clinton specifically condemned the bill.

When the AHB was first introduced in Uganda's Parliament by David Bahati in April 2009,  Ssempa was in the gallery as a supporter. Ssempa, who was elevated to international fame by virtue of his 2005 appearance at the groundbreaking Disturbing Voices AIDS conference at Rick Warren's Saddleback Church, told me just after the bill's first reading in October 2009, "I am in total support of the bill and would be most grateful if it did pass."

As the brutality of the bill became clear, many observers looked to Warren, one of the country's most prominent evangelical leaders, to denounce it, given his prior relationship with Ssempa. When it was introduced, I asked Warren’s publicist for a reaction to the bill and was provided a statement from Rick and Kay Warren in which they distanced themselves from Ssempa:

Martin Ssempa does not represent me, my wife Kay, Saddleback Church, nor the Global PEACE Plan strategy. In 2007, we completely severed contact with Mr. Ssempa when we learned that his views and actions were in serious conflict with our own.

Ssempa's views are extreme indeed. Warren's private distance might have been provoked by Ssempa's statements about HIV treatment and gays, like those he made to PlusNews:

Homosexuals should absolutely not be included in Uganda’s HIV/AIDS framework. It is a crime, and when you are trying to stamp out a crime you don’t include it in your programmes.

Warren found that his initial declaration about Ssempa didn't offset criticism, and so in December 2009, he strongly denounced the AHB, calling it "unjust, extreme and un-Christian toward homosexuals" via a letter and YouTube video addressed directly to Uganda’s pastors.

Other groups have followed Warren's dramatic lead and severed ties with Ssempa. For instance, WAIT Training, an abstinence education group, demanded that Ssempa remove all references to its group from his website. Philadelphia Biblical University, where Ssempa earned a master’s degree and received an honorary doctorate, issued a statement denouncing the bill .

But Canyon Ridge still considers Ssempa a mission partner and has continued to defend him even as he's gained an international reputation as the face of the AHB. When Canyon Ridge speaks of its famous partner, it portrays him as a tireless AIDS activist who promotes successful faith-based AIDS prevention in Uganda. This is the Martin Ssempa Canyon Ridge wants people to believe they are supporting. But how long can the megachurch maintain this posture?

Just consider the case of the Willow Creek Association, which bills itself as "the most influential ministry to evangelical pastors in the U.S." and boasts "more than 11,000 Member Churches in 35 countries," and is now distancing itself from Ssempa. (Canyon Ridge is part of the WCA network.)

WCA's signature leadership training events are conducted in "more than 250 cities in 50 countries each year" -- including Uganda, where the group partnered with Ssempa in November 2009. In other words, as Warren was publicly severing his ties with Ssempa, the WCA was strengthening its ties. In 2007, for example, the WCA bestowed its award on Ssempa’s church for its work in AIDS prevention.

But this year, Ssempa has shocked the world by showing hardcore pornography in several meetings designed to drum up support for the AHB, at least one of which was in a church. He's also shown slides that he claimed depicted "what homosexuals do in the privacy of their bedroom" -- leading to his infamous statement that homosexuals like to "eat da poo poo." He has also appeared in public meetings with Islamic clerics to decry homosexuality. In one such meeting with Ssempa, the Tabliq cleric Multah Bukenya threatened to provide squads of people to hunt down gays.

This was apparently enough to budge the WCA somewhat. On Thursday, Steve Bell, the organization's executive vice president, told me that Ssempa is no longer affiliated with their leadership summit in Uganda. Regarding the 2007 award, Bell wrote:

Willow Creek Association (WCA) was unaware of Martin Ssempa’s views regarding the criminalization of homosexuality when the honorable mention award was presented to him at the 2007 Global Leadership Summit. Had his views been known, particularly his prior support of the death penalty related to the AHB [Anti-Homosexuality Bill], he would not have been considered as a candidate for the award.

Early this year, Canyon Ridge issued a statement expressing support for Ssempa and declining to enter into the AHB debate. Then in June, after Ssempa's most recent statements came to light, the church said that it was "in conversation with" him about his work on behalf of the AHB. But just last week, Canyon Ridge's pastors told me that they "do not believe Martin Ssempa to be the man the media and others have portrayed him to be."

Mitch Harrison, one of the pastors, declined to reveal how much funding is given, but told me that the Ssempas "fall near the middle of the range" of what Canyon Ridge provides to its mission partners.

Even though the WCA itself is now uncomfortable with Ssempa, the church network has no plans to sever ties with Canyon Ridge, telling me on Thursday:

WCA membership does not imply that the WCA supports or agrees with a church’s position on social or political issues. Willow Creek Association’s goal is not to interfere in the political processes of other nations. Rather, its sole mission is to provide resources and training to church leaders around the world that will assist them as they minister to people in their communities and help them find a deeper understanding of God.

But Canyon Ridge's posture could isolate it in other ways. National HIV Testing Day was June 27. An annual event founded by the National Association of Persons with AIDS, the day raises awareness about HIV testing and encourages people everywhere to "take the test and take control." In recent years, NAPWA and the Centers for Disease Control have reached out to churches to become test sites -- in Las Vegas with Canyon Ridge, in what the church describes as a "show of compassion," acting as a host site for the past two years.

The organizers of the National HIV Testing Day were surprised and troubled by Canyon Ridge’s support for Ssempa. Tom Kajawski, spokesman for NAPWA, told me that "NAPWA conducts, sponsors and endorses HIV testing campaigns that are congruent with NAPWA’s ethos, mission and programs." While declining to comment without further study, he said that a venue that supported the AHB would not be consistent with their mission or create a welcoming environment. And this past Monday, Jennifer Sizemore, a spokeswoman for the agency that actually conducted the HIV tests at the church, Southern Nevada Health District, told me that her organization was evaluating its relationship with Canyon Ridge in light of the church's  support for Ssempa. Gay advocate Michael Jones created a petition on Change.org calling on the church to denounce the AHB and another one calling on the Southern Nevada Health District to cut ties with the church if they failed to do so.

The support of Canyon Ridge and the Willow Creek Association raises important questions for faith-based groups that work with gays and lesbians in AIDS-related ministries. Rick Warren initially sidestepped questions about the Ugandan bill, telling Newsweek, "It is not my personal calling as a pastor in America to comment or interfere in the political process of other nations." Only later, when he saw that his work was being  hindered by silence on the issue, did he reverse himself.

Can ministries like Canyon Ridge and Willow Creek have a successful outreach to GLBT people and people living with AIDS in the U.S. while going soft on those who stigmatize gays elsewhere?

Andrew Marin, an evangelical who seeks to build bridges to the GLBT community and author of "Love Is an Orientation," says no.

"In no way, shape or form can any ministry have even one ounce of credibility with the LGBT or HIV/AIDS community and be neutral or supportive of the Ugandan Anti-Homosexual Bill," Marin said. He called the Anti-Homosexuality Bill "another watershed line in the sand moment for evangelicalism," adding that "Canyon Ridge Christian Church, and any other church throughout the world who wants to have any influence in the HIV/AIDS community, needs to be very swift, clear and concise about the un-Christian and clearly unbiblical intent of this horrendous legislation."

Marin’s description of a "line in the sand for evangelicalism" seems accurate. American ministries who partner with anti-gay campaigners in other countries are now facing pushback not just from gay activists but from their sister and brother evangelicals. Those who believe they are immune may soon find that you can't preach one thing here and support something else around the world.