When it comes to raising a kid, two gangs dominate, and they agree on only one thing: You're doing it wrong 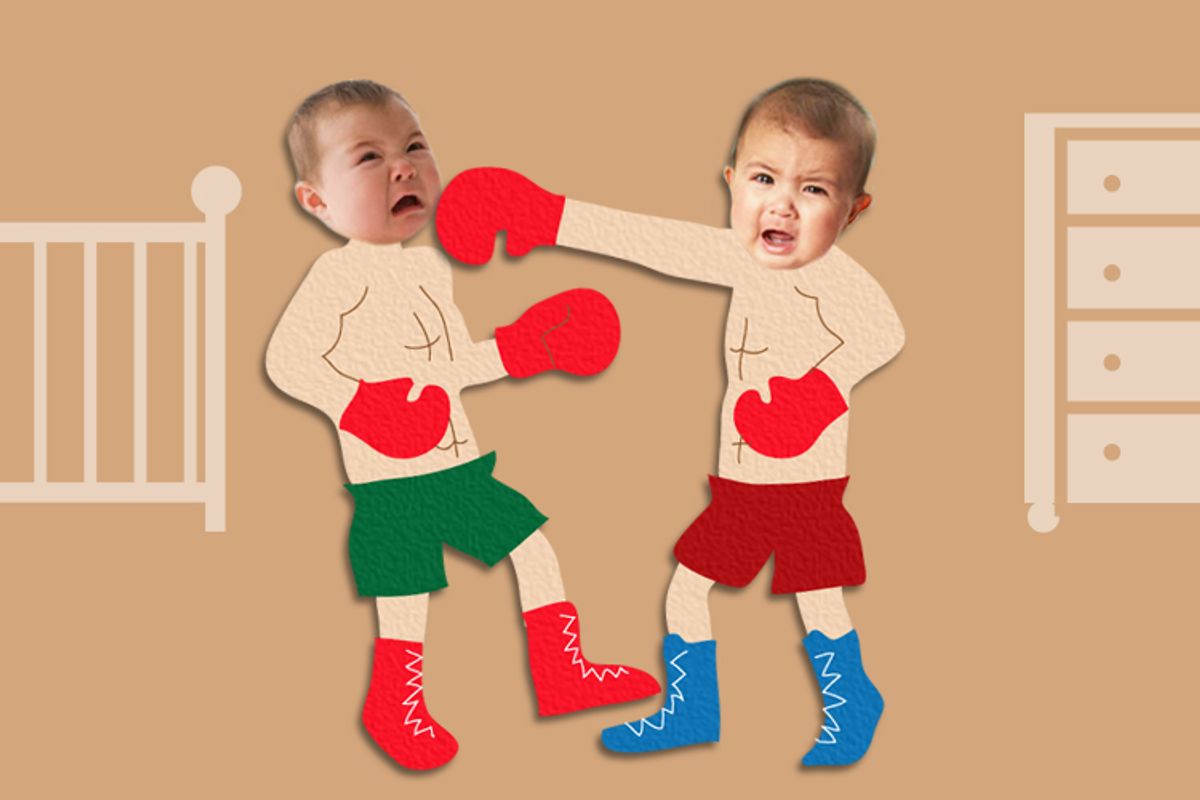 A wise woman once said it takes a village to raise a child, and as a new father I have found this to be true.

But lately I have also found the village to be dominated by two gangs of extremely, frighteningly organized parents, whom my wife and I spend a lot of time trying to avoid. Members of these gangs are lurking in every Pain Quotidian and farmers' market in Los Angeles, fighting tooth-and-nail turf wars over the best way for kids to be born, eat, learn and especially sleep, which is how the gangs came by their now notorious names in our house: the Cribs and the Beds.

The Cribs, as you probably know, believe in "crying it out," "walking it off," and midcentury modern furniture. The Beds, of course, believe in co-sleeping, home birthing and placenta soup. Both groups believe that I, as a new parent, am a dangerous idiot, and they are not at all shy about letting me know that.

So I'm writing this to take a stand, to ask for your help in taking our village back, and in not getting the stink-eye at parties.

After only eight months of fatherhood I've learned a lot about the gangs. I've learned to recognize the Cribs' distinctive attire (if I see a pair of orange Crocs coming my way, I just cross the street). I've come to know the Beds' brutal hazing rituals (which they refer to as "Bikram yoga"). I've learned each gang's colorful parenting patois.

But the main thing that distinguishes the gangs from each other is their philosophies. Fundamentally, the Cribs and Beds disagree about how kids should sleep. The first member of the Cribs I ever met explained to me, over a steamy quadruple espresso, that they believe a child will grow up to be calm, secure and independent as long as — over the sound of his own terrified howling and the screech of a white-noise machine turned up to 11 — he can't hear his parents grinding their teeth with worry over following the same sleep-training regimen all their friends do.

The Beds, on the other hand, believe that independence is something a family does, together, in bed. According to a conversation I overheard at this year's Topanga Canyon Soy Cheese and Hemp Festival, the Beds feel that nothing can match the sense of security a child feels when she cuddles with her mom, dad, sister, brother, stepsister and ferret, safe in the knowledge that they'll all be with her through the night. Every minute. Of every night. While her brother farts on her knee. Family Bed parents feel that co-sleeping will engender a sense for the child, later in life, that she can face anything, as long as a much older man with gray back hair and bad breath holds her tight while she does.

The gangs speak their own languages when it comes to things like sleep training, and it's important to learn to decipher them. For instance, our friend Marsha recently asked me whether our daughter was "sleeping through the night yet," which in gang-speak means, "How are things on the Island of Misfit Parents?" I tried but failed to change the subject, and when I described the ambivalent, improvised approach Jenny and I take, I was met with the inevitable phrase, "Whatever works for you!" which means, "Have fun visiting her in juvie!"

The Cribs and Beds are mostly in agreement, however, about the notorious peanut dilemma. My wife and I love peanut butter. The first thing I did when she told me it was time to go to the hospital to have the baby was make two peanut butter and jelly sandwiches for her to have later. I put them in our special "Go Bag" with the earplugs, lip balm, Rebozo support slings and thought, "Did I just release evil peanut dust into the air? Is this the last PB&J we'll eat for 18 years?" Many children, of course, have an allergy to peanuts, which doctors now believe is probably caused by an early exposure to peanut butter, and which can be prevented … by an early exposure to peanut butter. I understand this might be confusing, but don't worry — it's not your fault — it's peanut butter's fault for being mind-alteringly scrumptious. Both the Cribs and the Beds believe in the current scientific consensus that we must stay vigilant against peanut butter, by feeding it to our children early, but never. It's a fairly safe subject to bring up, and good for fooling the gang-bangers into thinking you might be one of them.

And some Cribs and Beds are finding common ground on other issues. For instance, when Jenny was pregnant, and before we knew the sex of the baby, I, as a Jewish soon-to-be father, started to feel the pull of a 2,000-year tradition and considered circumcising my possible son. I mentioned this fact at a rumble ("baby shower"), where I learned that I was just as likely to be called a barbarian by a mom with seven holes punched in her ear and a line of credit at the pediatric homeopath's as I was by the father of a 6-year-old figure skater. I also learned that the idea of not circumcising my son could get me accused of breaking a sacred covenant … by a twice-divorced Hollywood agent. I have to admit that, at that moment, it felt very tempting to join one of the gangs. To at least know where I stood, even if I had no idea what I thought. Maybe effective child rearing was really all about navigating life's daily obstacles with the comforting, quiet sense of smugness that only parent-gang membership could provide. But I fought that impulse. I reminded myself that I have my own brand of arrogance, thank you very much. If there's one thing a lifelong, fence-sitting commitment-phobe is good at, it's not choosing sides.

But sometimes conflict is unavoidable, and it's not pretty. The home-birthing wars could flare up again any minute now, and this time Ricki "On the Business of Being Born" Lake could make a full-fledged comeback. So, if you're not in a gang, it's very important to keep your wits about you. Soon after our daughter was born, we met a person who taught us the word "lactivist" is a real thing that exists. She said it in public, and she wasn't laughing, so I guess she was more likely to be a member of the Beds than the Cribs. But she lacked any of the usual identifying accessories, such as the Bolivian slings that many members of the Beds use to carry their babies, or the actual Bolivians that the Cribs prefer, so I couldn't be sure. Jenny had had a tough time getting our daughter to nurse properly for the first few weeks after she was born. After a very frustrating talk with the lactivist, Jenny asked her if it would ruin everything if she supplemented the baby's feeding with a bottle once in a while, and through an ice-cold smile, without hesitation, the lactivist said, "It would." As far as I'm concerned, the tears that popped out of Jenny's eyes at that moment were a consequence of our first brush with gang violence.

Passions run very high on these subjects. The Beds feel that in defending something like home birth, they're defending something primal and sacred, that they're on the side of Mother Nature herself. The Cribs feel they're on the side of modernity, of rational thinking, science and safety. When I hear them talk about it, I actually think both sides make a good case. But then, when I think about it a little more, I wonder about their sanity. Did I mention that I'm an ambivalent type? I wonder if maybe investing so much emotion in these issues isn't misplacing it a little. Couldn't they use all that righteous indignation for fixing the education system?

But see now, as I write that, I wonder why I'm being so hard on the gangs. Having a kid was an overwhelming experience. All of a sudden I was confronted with this fragile, chaotic, mortal life that I was responsible for. And then there was the baby! Seeing my own humanity clearly was one thing, but seeing my daughter's was all things, all at once, forever. Living, breathing, surprising chaos right there in my mortal hands. It was enough to make me fear that chaos a little bit. To want to hang on, maybe a bit too tight.

When Jenny and I were in the hospital, we never ate one of those PB&J sandwiches. Her contractions never once settled in to the regular pattern we were told would mark the onset of labor. We never used anything in the "Go Bag," or any of the special labor positions we'd learned and practiced in birthing class. But I'm glad we learned them. I'm glad we planned and made promises and came up with lots of rules for ourselves, because it helped focus our minds. It eased our worries, made us feel like this was doable. Made us feel like a family. Real gang members say that's how they think of their gangs — as surrogate families. Not many of us live in the same house with our uncles or grandmothers anymore. These days our friends are our families. So maybe what the home birthers and crib lovers are defending isn't merely about practices but about love and companionship. How these things help us find the sweet spot between chaos and order. Maybe people are just trying to find their footing on ever-shifting sands. Maybe we should all cut each a little slack.

Except for the people wearing orange Crocs, of course. You guys need to buy some real shoes.

Peter Birkenhead is the author of the memoir "Gonville."