The man behind the Vamp, a sparkly faux-vampire phallus, dishes on the world of pop culture-inspired sex toys 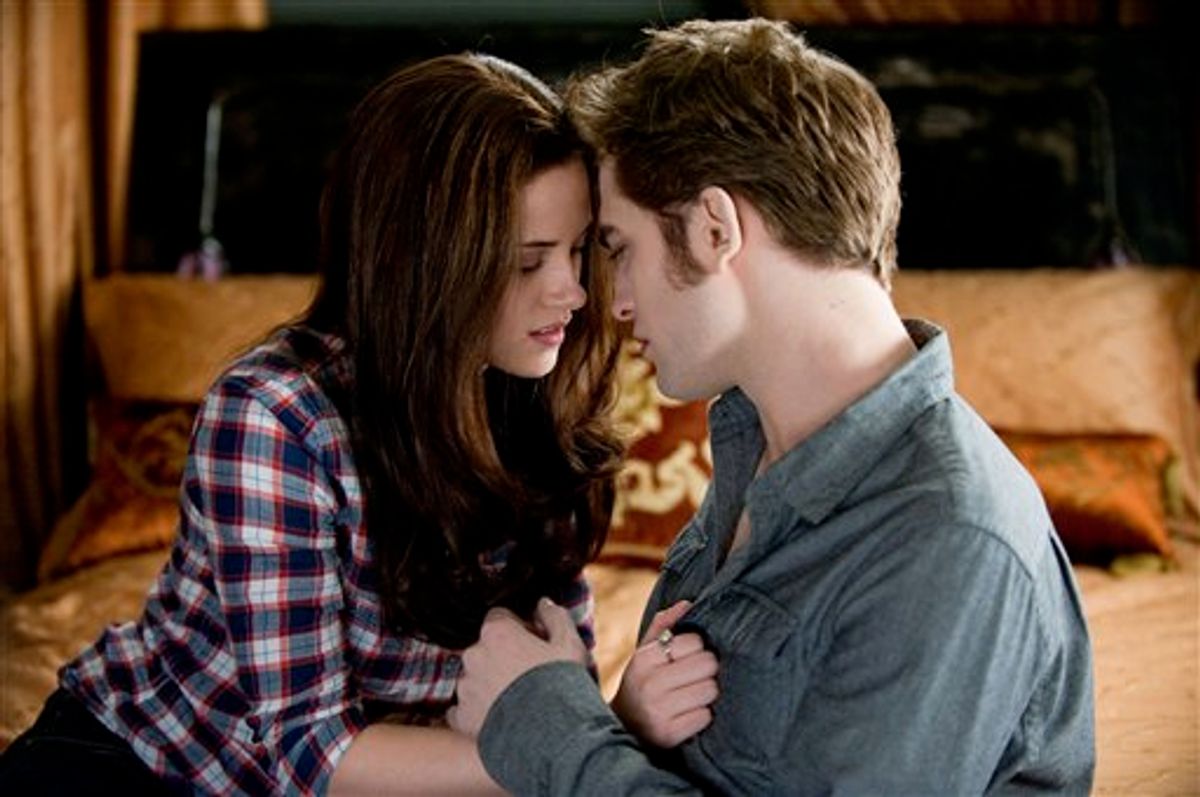 Condit is a computer nerd who runs a horror movie website and just happened to be in the right place at the right time. While working as the head of e-commerce for Tantus, a sex toy company, Condit noticed that a lot of the site's traffic was coming from twilighted.net, a "Twilight" fan-fiction website. And voilá: Two years and several dozen moldings later, the Vamp was born. Broadsheet talked to Condit about copyright battles with "Twilight" lawyers, how to imagine a vampire phallus (sparkles and all), and the future of pop culture-related sex toys (watch out, "True Blood").

How did you think up the design? How do you know what a vampire penis is supposed to look like?

Well, it was a pretty fun act of the imagination. The color was the biggest thing. It had to look like vampire skin.  It took me and the head of production two and a half months to get the color we were looking for. She has 10 other ones that are various shades that didn't work. Way too pink, way too pale, it took a long time to make a pale flesh tone. The other problem was the sparkle: It had to sparkle in the sunlight. If it didn't sparkle in the sunlight, the whole idea was dead. It was kind of poking fun but it's also supposed to tie into the whole fantasy. The glitter on hand didn't sparkle in the sunlight, so we had to have some ordered specially. We did have people write in and tell us that Edward was bigger than that.

Who buys the Vamp? Does it cater mostly to "Twilight" fans?

It's actually been a huge crossover hit for us. It was originally going to be a website exclusive, but sex shops all over the world started calling us up, wanting to put orders in. It became their top-selling toy. I don't think that since "Sex and the City" talked about the Rabbit has a dildo been so mainstream. A lot of people buy it just because it's vampire-inspired. I shared some ideas with another toy company called Fleshlight, and a couple months later they came out with their own vampire toys. There were plans to do a "True Blood" line as well. There were going to be two, one  called "the Nordic Warrior" and one called "the Southern Gentleman," for Eric and Bill.

And you also got into some trouble with lawyers representing "Twilight." What happened?

Originally, the ad copy on the website used all the book titles, like "in the twilght glow of the new moon ... don't let this deal pass into the breaking dawn," something like that. We tried  to work it in for people searching for it without outright saying it was a "Twilight" dildo. If I got it close enough people could infer the rest. A month after I launched it, the lawyers sent a cease and desist order, wanting it taken off the website completely. Our lawyers told them they didn't have a leg to stand on; we just had to take the book titles out of the ad copy.

Apparently, we got another request to edit the user reviews. The reviews are probably the funniest thing I've ever seen. People have the weirdest things to say about the Vamp. One person wanted  four of them to tie to their cats so they could have were-kitties. Some people [made] a fur cozy to make it a Jacob. We're talking about making a werewolf paw.

Had you ever designed a  pop culture sex toy before?

The idea of a "Twilight" sex toy seems to clash with the books' message of abstinence.

A lot of people have pointed that out but, from what I've seen, the majority of  fans are just not concerned about that.  The whole thing is a fantasy; it makes sense to sort of have fun with it.

Does Stephenie Meyer know about the Vamp? Has she ever contacted you?

UPDATE: CEO of Tantus, Michael Smith, responds: Jon Condit is no longer employed by Tantus, Inc. and does not speak for or represent our company. In fact, many of his statements are simply erroneous. The "Vamp" product was not designed with the Twilight series in mind; rather, the idea was to simply create a general vampire-themed toy and have our consumers use their imaginations to create their own specific fantasies. As such, Tantus has never targeted Twilight fans as the consumer base for the "Vamp," and it never marketed it as a "crossover" product.