"Bethenny Getting Married": From bridezilla to brand 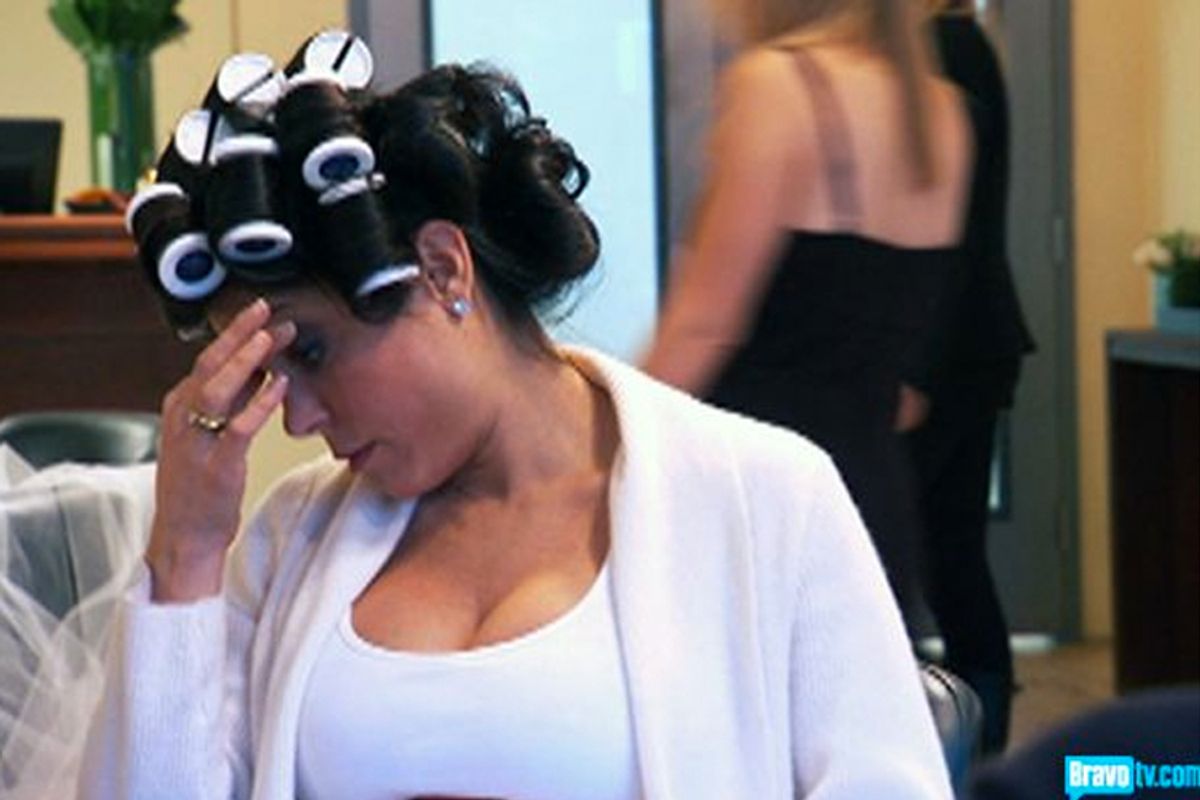 Bethenny Frankel in "Bethenny Getting Married?"
--

"I will rip your dick off." This is Bethenny Frankel, author of "Naturally Thin," creator of the Skinny Girl Margarita, breakout star of "The Real Housewives of NYC," telling her wedding planner Shawn Rabideau what will happen if he botches her upcoming nuptials.

"I know you will," Shawn says. "And serve it as an hors d'oeuvre or something."

Shawn, who looks so much like Buster (Tony Hale) of "Arrested Development" that it's disconcerting, has every reason to be frightened. Not only is Bethenny seven months pregnant and therefore prepared to engage in hand-to-hand combat, not to mention vicious acts of dismemberment, in order to get what she wants, but her wedding is just two weeks away and there are cameras following her every move for her new Bravo show, "Bethenny Getting Married." On top of grappling with pregnancy, the death of her father, her recent engagement (to boyfriend Jason Hoppy), and the end of her friendship with Jill Zarin (her best friend in the first two seasons of "Housewives" who turned on her in the third), Bethenny is now managing a multi-tiered personal brand, one that just happens to rely on her ability to make fun of herself, bicker with her husband, discuss her deepest, darkest fears with her therapist, and have a few mini panic attacks, all for a national audience.

But Bethenny isn't uneasy in this role. She's no Lady Gaga, second-guessing her choices and falling out of her teetering elevator shoes even as she plots ways to appear more enigmatic or mysterious. Like any good reality star, Bethenny is not interested in mystery. In a recent conference call, she says that the show is "who I am. I'm never going to edit myself because then the show wouldn't be authentic."

"The honesty. I think it's the one thing I really take pride in," she adds. And she's right. After all, planning a wedding in real life is mind-numblingly boring, even for the bride. Watching someone else plan a wedding should, by all rights, be about as enjoyable and entertaining as having your toenails ripped off one by one. But Bethenny takes every experience – from picking out a location to deciding on a hairstyle for the big day – into a carnival of caustic delights. When she's forced to choose a last-minute skimpy dress for her bridal shower because the original dress doesn't fit anymore thanks to her rapidly expanding belly, she quips, "I'm now a pregnant sequined prostitute going to my own bridal shower." She adds, "If I had a tampon in, the string would be longer than this dress."

Far from giving her the déclassé taint of, say, the New Jersey Housewives, with their unseemly brawling and visible lip liner and overuse of leopard prints, Bethenny's odd mix of off-color spontaneity and girly-girl overachieving somehow works, maybe because this woman knows how to treat the camera like her close personal friend. Not only is she armed with a witty remark for every occasion ("Your hair is aggressive today," she tells her young male assistant when he shows up with gelled Heat Miser hair) but she's perfectly comfortable dragging her brand new fiancé in front of the cameras as needed. Of course she'll pose nude for PETA! She's happy to feed New York magazine a steady flow of good copy! Whatever is necessary to promote her empire, Bethenny seems more than willing to do it.

How good is she at personal branding? When asked, in the same conference call, whether or not she's drinking while she's pregnant, she replies, "I am told I can have one drink a day, so I have the Skinny Girl Margarita." Forget that you could put almost any word in front of "margarita" – a word almost every human associates with that expansive state of happiness that comes from having a few ccs of tequila flowing through their veins – and make a big stack of cash. Forget that her dieting and cooking advice boils down to the same old low fat, fresh vegetable recipes you can find anywhere. Forget that there's something a little unnerving about someone so focused on her latest global branding efforts that she doesn't mind peeing into a cup underneath her wedding dress as the cameras roll. Bethenny demonstrates a consistent excess of one of the most marketable traits in these modern times: unselfconsciousness.

Her total lack of shame and regret, in fact, make Bethenny the ultimate personal brand for the 21st century. Hiding from the public eye, trying to keep parts of your life private, not having light-hearted rejoinders and flip explanations for everything you do – these are tantamount to embracing failure these days. The media-saturated universe wants a steady flow of soundbytes, bloopers, behind-the-scenes footage, inside scoops – the more humiliating, the better. Cooperate to feed the machine exactly the sorts of calories it wants, and watch your star rise.

It is taxing, isn't it? To package your whole life for public consumption? Bethenny says it's really not. "My life is very divided between work and rest. I'll do things for work, and I'll lay around the house."

But transforming your existence into a product is a more complicated endeavor than just lounging around in your sweats occasionally – as the show itself documents. In Friday's episode, Jason laments that their wedding is being touted on Page Six, and adds, "I've never wanted such an extravagant wedding."

Bethenny tries to explain that she's running a business, here. "Just because it's a business doesn't mean I can't love you or that I don't love you."

Later, when Sean tries to pick at Bethenny's armor by mentioning some gossip about her that ran in the New York Post, Bethenny responds in a similarly unflappable tone. "That stuff? I don't care about. Zero. Everything's not gonna be perfect. Everyone's not going to buy my books and think I'm great. There's a price, everything has a price, and the price that I pay is being under the microscope."

Ultimately, this is what "Bethenny Getting Married" (and the inevitable follow-up show, "Bethenny Raising a Baby" and "Bethenny Having a Mid-Life Crisis") is all about: The price of transforming your personal life into a personal brand. In this age of social media and rampant self-promotion, Bethenny is either a winning formula or a cautionary tale.

As Bethenny puts it on her show, "Being able to do it all defines me." And that's exactly what worries us about her. Then again, just because it's a business doesn't mean that we don't love this woman. Some people are just born to be a brand.