Competitive eating: Bigger than the Olympics?

On the eve of the annual Nathan's Hot Dog Eating Contest, the sport's leaders tell why they don't need the Games 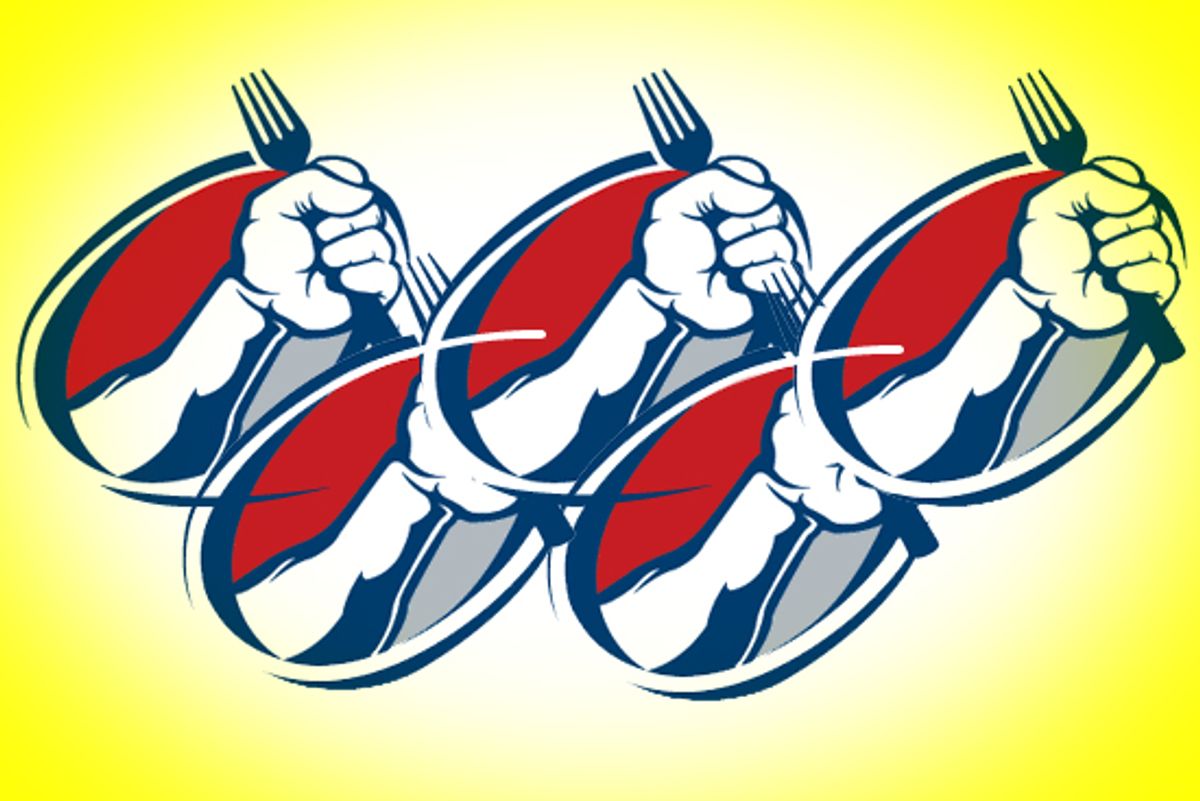 Each Fourth of July, as revelers celebrate liberation from colonial rule by firing up the barbecue, drinking light beer, and yelling at their kids to stop pointing the firecrackers directly at each other, 40,000 people descend on New York's Coney Island to witness the kind of patriotic feat our forefathers surely had in mind when they signed the Declaration of Independence: a long table of adults attempting to eat as many hot dogs as possible in 10 minutes.

The Nathan's Famous Fourth of July International Hot Dog Eating Contest, now in its 95th year, brings together 20 of the world's best competitive eaters — each of whom has beaten out hundreds of others in multiple qualifying contests — in a display of digestive prowess. Last year, as 1.5 million people watched on ESPN, 26-year-old Californian Joey "Jaws" Chestnut set a new world record when he consumed 68 hot dogs and buns (ahem, HDB), beating out his main competitor, Japan's 32-year-old Takeru "Tsunami" Kobayashi, for the third year in a row. Of the more than 80 professional eating contests overseen annually by Major League Eating, the Nathan's hot dog competition is the jewel in the organization's crown, a crown that has, according to MLE, only gotten heavier with riches as the sport continues to make its way into the mainstream.

Mike, you run operations and marketing for MLE, but at the Nathan's contest, you also act as the head judge. How does judging work for an event of this size, when so many things are happening at once?

Mike Antolini: With a contest like this — I mean, it's the mecca of our competitive eating schedule, the world championship, the Super Bowl, if you will, of our sport. There's so much going on. There are five hot dogs and buns on each plate, and things are going so fast that it's really very tough to follow. You just have to stay focused and try to take it all in. We basically have a pit of judges, officials in jerseys in front of the table, and then each eater has two judges assigned to them. I'll be in the middle of the table, focusing on the main competitors, basically as an added layer, to make sure there's no foul play.

There have actually been quite a few judging controversies over the last few years, right?

M.A.: There's hundreds of thousands of dollars of prize money, and there's also a lot of pride that the athletes compete for, so it really does become very competitive. And among the circuit, there's always talk. Do some eaters bend the rules? Do they eat messy on purpose, or inadvertently? Does somebody deserve a deduction? Did anybody have a Reversal of Fortune [the official MLE term for puking], which is an automatic disqualification? Now, Joey Chestnut happens to be a very clean eater. There are folks who feel former six-time champ Kobayashi is a very messy eater, and when people are messy eaters, they think: Are they putting dogs or buns under the table, or in the cups that the eaters dunk them in?

G.S.: They just ate 60 hot dogs in 10 minutes. You should see the table. You have to go through and count the plates to confirm, and a lot of times with the dunking, there will be a little bun leftover. You don't DQ a guy for that, you deduct a little bit ... but if there's [mimes gagging motion], you have to decide — is that a disqualification? There was outrage in the competitive eating community in 2007 because the call on ESPN was that Kobayashi was going to be disqualified, and he wasn't. We stood by the judges, as we always do. Which is tough if you're Joey Chestnut. I mean, there's money involved, but it's really about the prestige.

This is the biggest event for you guys, but MLE puts on contests year-round, and you've been steadily adding them each year — oysters, chowder, ribs. What's the process like for starting a new eating competition? Are any foods off-limits?

G.S.: We do not eat "Fear Factor" kinds of food and we wouldn't eat anything unsafe, but other than that it is open. Most of our foods are selected by sponsors, either because they are connected as a brand or because we and they feel the food will connect with an audience. Generally, we receive inquiries from brands seeking to generate publicity, and we develop the contests with them.

Are there any foods that competitors really dread?

G.S.: Many eaters will not do La Coste&ntildea jalapeño contest because of the obvious difficulty. But Sonya ["The Black Widow" Thomas] and Pat ["Deep Dish" Bertoletti] ate 275 last month.

How do you respond to critics who say competitive eating sends the wrong message — that it's an insensitive display of gluttony at a time when we're trying to fight rising obesity levels?

G.S.: We get fewer complaints than you might expect. With regard to obesity in the United States, no one would argue that we're the cause of it. I could see if we were out there thumbing our nose, like, "Let's eat everything in sight," like some college thing, but it's a sport. And we treat it like a sport. It's a sport that involves the consumption of food, but it's not an exercise in waste. If you want to get to the bottom of obesity, you have to look at people's activity levels and the consumption of high-fructose corn syrup.

And with regard to world poverty and hunger?

G.S.: Hunger does come up: "How could you do this if people are starving?" For one, any of the food products that we consume — say, chicken wings — those chicken wings are not otherwise going to food charities or anything. It's like having a pool and saying, "Well, there's a drought in Africa; you can't have a pool." My water's not going to get there.

Also, the truth is that every all-you-can-eat buffet and supermarket in America throws away more food every week than we eat all year. That's not an exaggeration. No one talks about the amount of food that's thrown away from the grocery stores. But we do understand that if we are eating food in a lighthearted way, clearly we have an obligation to address hunger issues, so we donate quite a bit. The numbers aren't huge — I think that over the last year or two we raised $50,000, but that's a significant amount of money for us. We've done a couple events for food banks, and this year Nathan's is giving 100,000 hot dogs to the food bank.

Have you had any pressure from local or organic food activists to change the foods you use or try to make a political statement through these competitions? There's no artisanal division as of yet, right?

Your logo has a hand with a fork in it, but we don't usually see utensils at eating competitions. Are they too dangerous, or do they just slow people down?

G.S.: There are indeed some utensil-based contests [baked beans requires a spoon], but most frequently the eaters use the fork that God gave them.

There's been talk of the Olympics before. Do you think that's where competitive eating is headed?

G.S.: I don't think the Olympics is a viable option at this juncture, because Jacques Rogge, the head of the IOC, has repeatedly failed to respond to our requests to be part of the Olympics. It's a shame, because we'd be perfect. In the winter, we could do something warm, like a s'more. And in the summer Olympics, we'd do something cold like, I don't know, a chilled dill soup. But no response whatsoever.

And you know what, we don't need the Olympics now. Maybe 20 years ago, it would have benefited us. But the growth of our sport in the U.S. has gone from 25 events around 10 years ago to 80-plus now. We're on TV. I think overseas expansion is really where it's at for us. In the past year or so, we've been in Australia, Singapore, Canada, Greece, England, the Czech Republic. I see us as an event-driven, free-media-driven platform across the U.S. and overseas, with some TV.

How has competitive eating been received in other countries? It seems like such a fundamentally American thing to do.

G.S.: When we first started expanding, we really didn't know whether the sentiment and the vibe and presentation would play well overseas, but it really has. It is very popular in Japan, and its growth there was independent of our efforts here. We had an event in Canada, and it was the biggest story in the Canadian media that day. It was the lead item trending on Canadian Twitter. They got, you know, maybe $100 million worth of media coverage.

That's a lot of media coverage. What were they eating?

M.A.: Poutine. It's a Canadian comfort food kind of thing: French fries, chicken gravy and cheese curds. So it really resonated. That event was huge.

And how do you account for the growth in general? What is it about competitive eating that appeals to spectators and athletes?

G.S.: I think it's popular because it is dramatic, amazing and funny ... and it has a direct connection to the audience members. Not everyone golfs or plays basketball — and no one with any sense curls — but everyone eats. You and I can eat three eggs, maybe, but Sonya Thomas can eat 65 in six minutes and 47 seconds.

Finally, there's some big news for this year's hot dog contest. It was announced Tuesday that Kobayashi won't be at this year's contest because of a contractual dispute with MLE. What's the deal?

G.S.: We have tried very hard to come to an agreement with Kobayashi's camp, but we're at an impasse. We remain open to resolving this issue, but we're not optimistic that it'll happen — it just doesn't seem like he wants to be there. Kobayashi ushered in the modern era of competitive eating, but he has since had trouble keeping up the level of competition that he created. He lost three years in a row to Joey, and he lost one month ago on his own home turf. We wish he were going to be there, but it's important to remember that the competition for Joey has really not been diminished.

Now that Kobayashi is out, who should we be watching? Any up-and-comers?

G.S.: As I said, the competition for Joey has really not been diminished. There are still three serious contenders. The No. 2 eater right now is Bob Shoudt [who has beaten Chestnut in rib, grits and spaghetti competitions]. Then there's Patrick Bertoletti and Tim Janus ["Eater X"]. Those three will all be in the 50s.

M.A.: Ben Monson is a rookie a lot of people are looking at this year. He's from California, a 22-year-old personal trainer, and he beat Joey Chestnut in a flauta-eating contest in his third event ever. He's really beaten the who's who in less than a year of eating.

G.S.: If Joey hits 70, as he expects he will, he'll beat these guys. But they'll be at the level Kobayashi was. When Joey heard Kobayashi wasn't coming, his response was "That doesn't change anything for me." It's not like he's got a holiday.