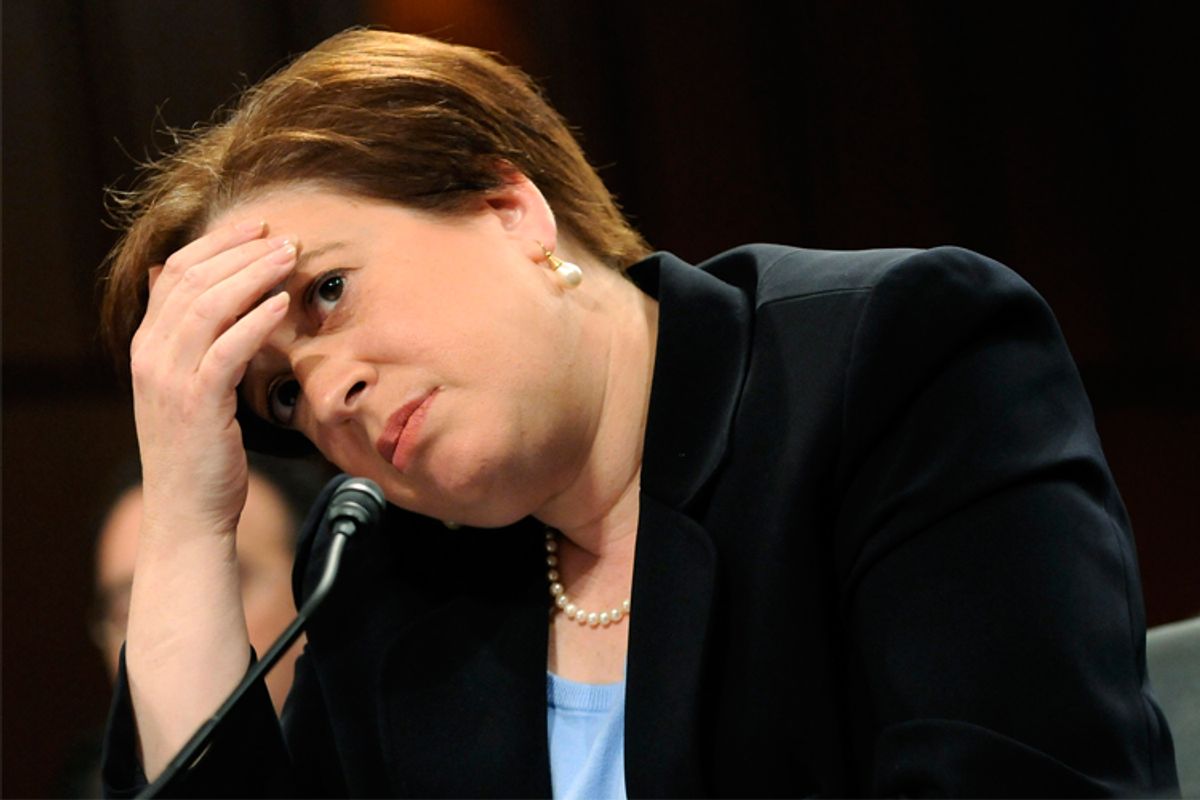 U.S. Supreme Court nominee Elena Kagan rests her head on her hand during testimony on the third day of her Senate confirmation hearing.
--

Members of Congress are rarely at a loss for ways to make themselves and their institution look foolish. But, as we were reminded last week, there is no more embarrassing spectacle than a Senate Judiciary Committee hearing for a Supreme Court nomination. If the three days of questioning that Elena Kagan endured proved anything, it's that these sessions have outlived their usefulness.

This is not a novel argument. Since 1987, when Robert Bork failed to gain confirmation in large part because he was too candid in expressing his views, nominees have become completely closed in discussing their opinions. After Bork, White House teams decided they could gain nothing from tapping individuals who might invite a hint of controversy. The result has been a stream of milquetoast, clam-mouthed nominees and, minus the Clarence Thomas saga, completely unmemorable hearings.

This week’s experience may have been the least noteworthy of all, as Kagan herself is the perfect representation of the emptiness of the current process. With absolutely no written or spoken record on seemingly any issue of significance, the shrewd careerist is the blankest of blank slates. The prevailing assumption was that little that would be gained by her hearings and, as it turned out, absolutely nothing that will affect her chances of confirmation was said. She will sail through the full Senate, something that was never really in doubt. As with most legislative matters these days, nearly every senator knew how he or she would vote on the nomination moments after it was announced.

Consequently, neither side acquitted itself well during the hearings. Frustrated by the inevitability of Kagan’s approval, Republicans resorted to harsh questioning that evoked memories of Democrats' treatment of John Roberts and Samuel Alito — two Republican nominees who the Democrats were powerless to derail. But the GOP’s tactics were more severe. The Judiciary Committee’s Republican members were actually reduced to shamelessly bashing civil rights pioneer Thurgood Marshall, whom Kagan clerked for, and focusing on Kagan’s position military recruitment on Harvard's campus when she was the university law school dean. The ROTC issue, of course, had little connection to Kagan’s judicial temperament. It was a pathetic display.

Sadly, Democrats were little better, throwing Kagan softball after softball, content to ease her through to a safe floor vote without pressing her on anything. The low point of the hearings may have come when Sen. Amy Klobuchar of Minnesota asked Kagan about her affinity for the characters in the vampire movie "Twilight." Klobuchar’s cringe-inducing questioning was reminiscent of Joe Biden’s hectoring of Alito during his hearing in 2006, when Biden ranted against Alito’s alma mater, Princeton, inanely donning a baseball cap to make his point.

For her part, Kagan played the role she undoubtedly rehearsed with her White House handlers, pioneering innovative ways to say nothing by uttering something. Despite once writing that Supreme Court nominees should be candid in their Senate testimony, Kagan did precisely the opposite. Her cynical approach was a perfect fit for what these proceedings have become: pointless charades.

Naturally, the best thing to do would be to abolish all confirmation hearings and ask nominees to fill out simple written questionnaires. This actually happens already, before the hearings start. But alone, it would be more than sufficient, given that senators generally know how they will vote early on. This wouldn't force nominees to be as candid as Bork, but frankly, there's no way to push a nominee to answer difficult questions — especially when the nominees are brilliant lawyers who have made a career by fashioning evasive responses.

Both parties could also agree that, barring extraordinary circumstances, all of a president’s nominees should be sent to the floor. This would expand on the famous 2005 deal carved out by the "Gang of 14," which ended a long fight over a handful of blocked Bush appellate court nominees, acknowledging once and for all that with judicial nominations, elections have consequences.

Ultimately, this might be the biggest underlying issue. Both parties have come to use the confirmations process to stymie the other party's nominees. This ignores the will of the voters and politicizes the judicial branch of government, which is meant to be free of partisanship. For most of the country’s history, judicial nominees were approved with little controversy. Democrats and Republicans should find a way to return to this arrangement, and could well start by dissolving the public nomination process.

Not that our senators will ever do this. There are few better ways for them to get the national exposure they crave than by sitting on the dais of an overflowing hearing room and playing to the cameras. More important, the judicial wars remain an important issue for the Republican base, and given the party's rightward movement, elected GOP officials don't want to give up an easy opportunity to connect with their base.

So even though last week's hollow spectacle is behind us, another one just like it is already on the horizon.