It's off to feminist summer camp 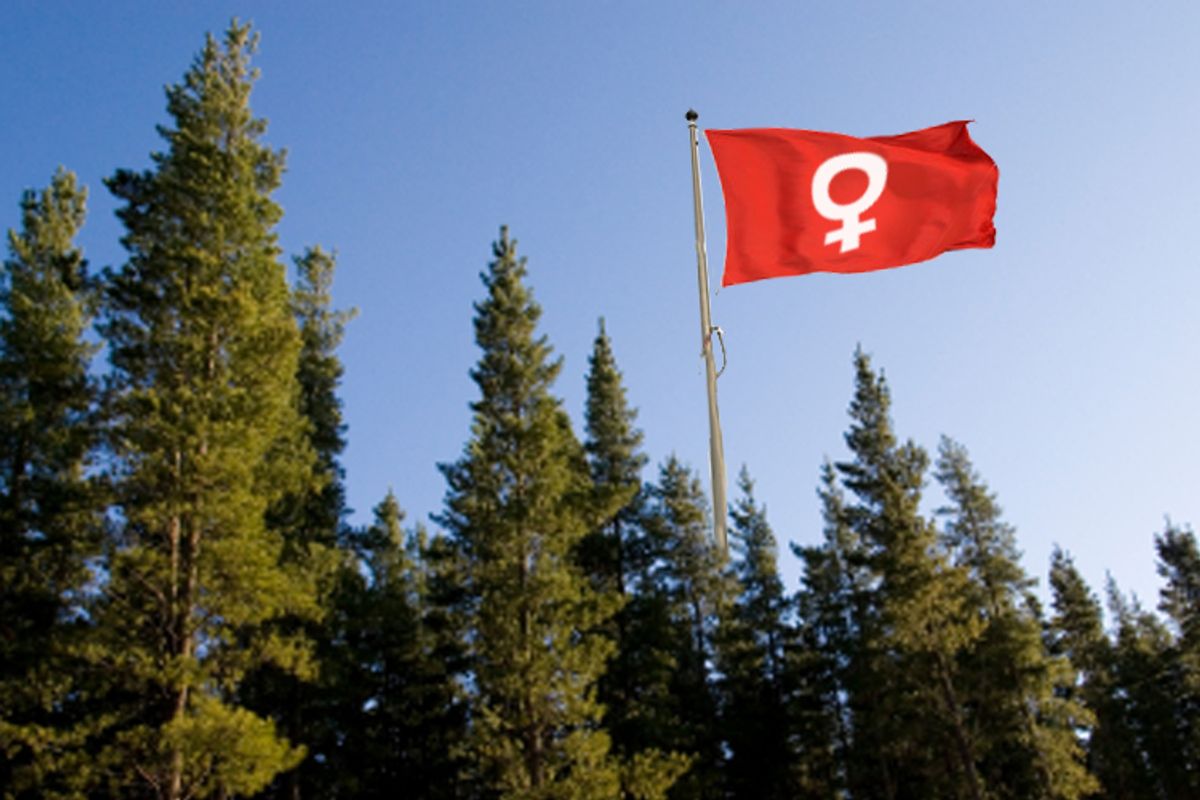 Lots of kids go to summer camp to roast hot dogs and learn how to canoe. Others go to get really good at tennis or to immerse themselves in musical theater. And now, you can go to camp to learn how to be a feminist.

In some ways, the schedule isn't all that different: There's theater, physical fitness -- and a lot of bonding. For the week-long summer program that just wrapped up last month, each day has a particular focus. On Thursday, it's feminist art, which takes the campers to the Streb gym in Williamsburg, Brooklyn, for a class on movement. The instructor tells the campers to perform the "plop" test, in which they jump up and down ... to make sure the ground is there.  "This technique is about assumption busting," she says to them.

The campers are game for it: They jump, and then later, they try movements like falling to the ground in a single motion and jumping on a trampoline. When Sara Myles, a student at Bowling Green State University in Ohio, has trouble launching herself onto a trampoline, she shouts to rev herself up. "I can do this. I'm a feminist!" That declaration is one of the overarching themes of feminist summer camp: declaring one’s feminist status proudly, and then figuring out how to put that pride and energy to use.

Activists Jennifer Baumgardner and Amy Richards started the program for college students after visiting university campuses around the country and realizing that lots of women’s studies students wanted to work as feminists, but didn't know where to look for jobs. They planned the week in order to introduce the campers to as many different feminist organizations as possible: They vary from the Guttmacher Institute, which collects statistics about things like the number of abortions performed each year, to Babeland, a female-friendly sex toy shop.

Angi Proehl, a working mom who's finishing up her bachelor's degree from Minnesota State-Mankato, says she was most touched by meeting members of the group Sistas on the Rise, which is run by and for young women of color in New York City. "They're creating a space and a place and for young women in their community who may not have anything, who don’t know the system, who don’t know how to budget for diaper ... That's something I can take back to Mankato, and hopefully build ideas."

Proehl, who's of Filipina descent, says she came to the camp to learn skills that she can apply to her work at the YWCA back home.  "I have a hard time asking for money," she says, laughing. "More than anything, fundraising is having the confidence to do it. And I'm working on that confidence. All this, this whole experience, just learning to speak with people -- I naturally don’t have that. But seeing all these women who've done so much, it's amazing to me."

Proehl said this while attending a mixer for bigwigs of the feminist movement, such as Jessica Valenti, who writes the blog Feministing -- it's not a bad place to hone networking skills. That's another perk of the camp: It provides campers with access to people they might not have otherwise met. That's led to internships, and in some cases, jobs. Carly Romeo, who went to a winter session of the camp a few years ago, just began working for Gloria Steinem, and for Soapbox, the organization that puts the camp together.  "I'm sure I would have heard of these people otherwise, but the way that we got to interact with them was so profoundly intimate ... It's a conversation that you would never get if you just e-mailed saying, 'I'm interested in your organization, can I come visit?' It's much more in depth, it's much more personal."

And as everyone who went to camp knows, some of the best bonding happens after the lights go out. The participants are in fact staying in a place that’s pretty much as close to camp as you can get in Manhattan: a hostel at 106th Street, with bunk beds and four women to a room. It was a shock for some participants who had never even lived in a dorm before, but others, like Jami Forshee, a senior at the University of Florida, said it provided extra time to talk:  "You forget how much fun slumber parties are when you get older. There's that sense of laying up all night talking and exchanging stories and finding out fun things about each other, and it's been a really great experience."

Baumgardner says that closeness ties into one of the main points of the program -- to provide a safe space for campers to share anything they would like to. "For almost everybody in that room, me and Amy, too, there are spaces that we go to where we feel we can't bring our whole selves, like, don't mention the abortion, or don't mention the girlfriend in your past, and there's something about feminism that says you should be able to bring your whole self. Your whole self is going to be valued in this room, and that’s what we try to create here, too."

Stephanie Hughes is a radio producer for WYPR, the NPR affiliate in Baltimore.  She’s working on an audio version of this story for the radio show “Life of the Law.” You can find her on Twitter @stephanie_h