"Losing Our Cool": The high price of staying cool

How air conditioning changed the American landscape, transformed our politics, and is endangering our health 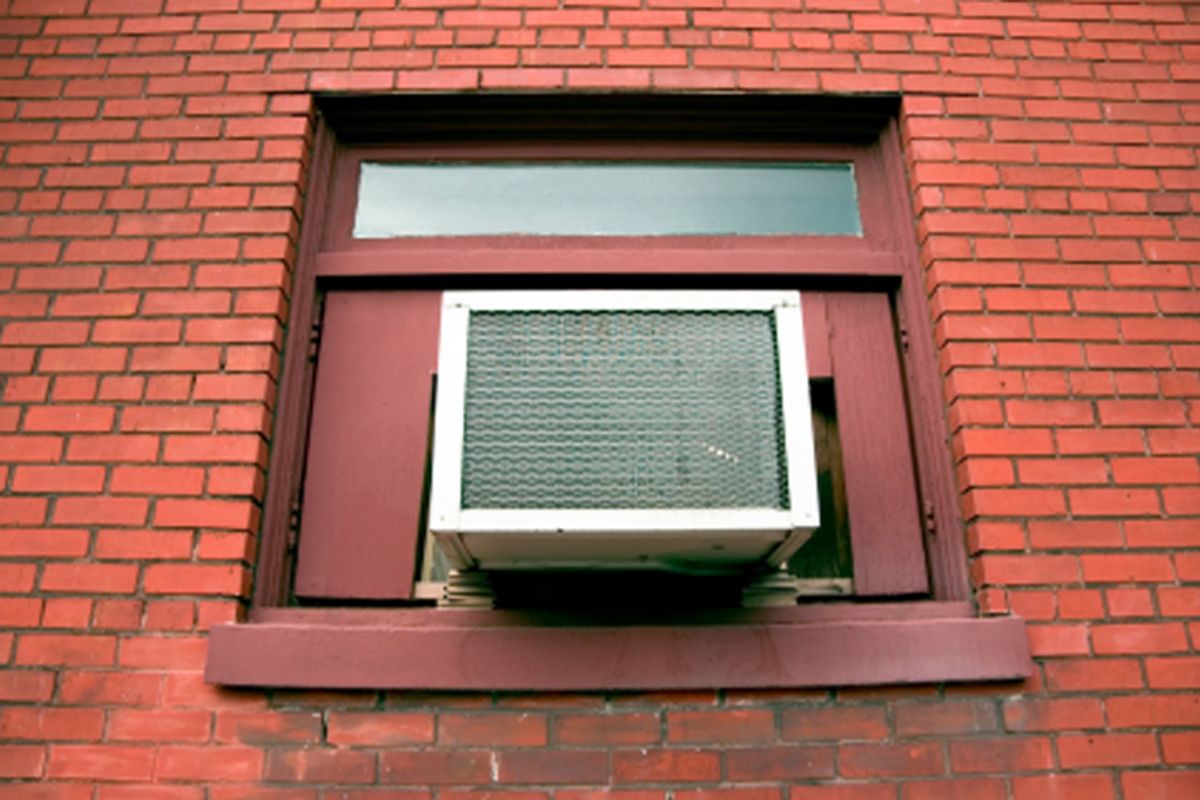 In the last half century, air conditioning has joined fireworks, swimming pools and charred hamburgers as a ubiquitous ingredient of an American summer. It’s no exaggeration to say it has changed the way this country functions, shaping everything from where we’re willing to live (Las Vegas, anyone?) to the amount of sex we have (more: It’s never too hot to get it on when the A.C. is blasting). Nine out of 10 new homes in this country are built with central air conditioning, and Americans now use as much electricity to power our A.C. as the entire continent of Africa uses for, well, everything. It has so thoroughly scrambled our way of life that when the National Academy of Engineering chose its 20 greatest engineering accomplishments of the last century, A.C. not only made the list, it clocked in ahead of spacecraft, highways and even the Internet.

But as science writer Stan Cox argues in his new book, "Losing Our Cool: Uncomfortable Truths About Our Air-Conditioned World (and Finding New Ways to Get Through the Summer)," the dizzying rise of air conditioning comes at a steep personal and societal price. We stay inside longer, exercise less, and get sick more often — and the electricity used to power all that A.C. is helping push the fast-forward button on global warming. The invention has also changed American politics: Love it or hate it, refrigerated cooling has been a major boon to the Republican Party. The advent of A.C. helped launch the massive Southern and Western population growth that’s transformed our electoral map in the last half century. Cox navigates all of these scientific and social angles with relative ease, providing a clear explanation of how A.C. made the leap from luxury to necessity in the United States and examining how we can learn to manage the addiction before we refrigerate ourselves into the apocalypse.

Salon spoke to Cox about our jonesing for cold air, how A.C. lands Republicans in the White House, and why Congress should be forced to meet outside in the summer.

Something like 85 percent of Americans now have air conditioning in their homes — and we now completely expect it when we go to work or the grocery store. How did we get so dependent on A.C. anyway?

Air conditioning is one of those technologies that are very good at generating more demand for themselves. The most obvious way that it’s doing that now is in adding to greenhouse emissions, which will mean even hotter summers in the future and even greater demand for air conditioning. Whether or not that has happened already, we do know already that in the '90s and the 2000s we’ve had some of the hottest years ever.

Also, we get into a downward spiral with air conditioning, because science shows that our biological tolerance for the heat is eroded if we spend almost all of our time in climate-controlled bubbles. And it’s suspected of being a factor in weight gain because we tend to eat more when we’re in cool conditions. Plus, one thing that all commuters are familiar with is that it’s necessary now on city streets and freeways to run the air conditioning in even slightly warm weather to be able to keep the windows rolled up against the exhaust from other cars.

What would the U.S. look like today without air conditioning?

It’s pretty much unanimously believed that if we had not had air conditioning, we could not have had this huge migration of population from the North to the Sun Belt, and we certainly wouldn’t have seen 70 percent of all economic growth happening in the South since 1960. This has had major political implications by shifting electoral votes to predominantly red states in the South and West. In an imaginary world where air conditioning hadn’t been invented, it could easily be the case that many of the big Republican victories in the '90s and 2000s would not have happened.

You write that there’s something really peculiar about the way we use air conditioning in the U.S., basically how we devote so much energy to cooling spaces instead of people.

Exactly. If you look at how we use our air conditioning, it’s shocking. Take a 3,000-square-foot house on a summer day — only about 3 percent of the cooling power from the central air conditioning is going for people cooling. That is to say, 3 percent is being used to help remove heat from people’s bodies. The other 97 percent is going to cool the structure of the house, all the tens of thousands of cubic feet of air that aren’t even coming in contact with these people. So all that energy is not being focused where it’s needed, and this is assuming that people are home all of this time, when really they’re probably out working for most of the day. But the air conditioning stays on because it would be too difficult if they turned it off and then came back in the evening and turned it on. The central air wouldn’t actually get the whole place cooled off until late in the evening.

Does it help at all if you use a more efficient A.C. unit?

The A.C. equipment today is about 28 percent more efficient than it was 15 years ago. But the average air-conditioned house is much bigger and using 37 percent more energy to cool it, so there’s no real gain there.

You met people who live in some of the hottest climates in the U.S. and have chosen not to use air conditioning.

Yes. I met one couple without air conditioning in their home in St. Petersburg, Fla., a city that in the summer is like a huge outdoor steam bath. And they both say that people say to them, "Wow, you must have some secret trick." But they told me it’s actually pretty much just the old-fashioned advice that people used to follow. They will close windows to keep the cool air in and only open them when they need to. In the evening they have a house fan to draw the cooler air back in, but a lot of the time they don’t even use that. The day I visited them it was the second-hottest day of 2009. They go through a lot of ice water. In that environment there are very few people who would be willing to do it.

You’re one of the proud few without A.C. Do you find it’s possible to be comfortable in the heat of the summer without it?

Yes, I think so. A couple of weekends ago it was in the high 80s here in Kansas. I was in my living room with the ceiling fan going, and I thought, man, it’s really nice in here, so I went and got a thermometer, and it was 84 in the living room. I had an aunt who was always trying to economize and would keep her windows shut up and her air conditioning on 80 degrees, and that was utterly stifling. You just couldn’t exist in that kind of environment, but if you have no air conditioning and plenty of ventilation and air movement, it’s comfortable. Warmth in and of itself is not bad at all. It can even be quite enjoyable.

There have been some positive health consequences from air conditioning — making it safer for people during heat waves, for instance. How do you reconcile this with wanting to ratchet down our A.C. use?

Yeah, it does have a Jekyll-and-Hyde character in that respect. But I think we need to look at it is as a fail-safe mechanism and recognize that a lot of the health problems that we need A.C. to solve, it may have contributed to in the first place. We need to look at the conditions under which people die in heat waves, the harsh life conditions that they’re enduring more generally. That’s the real root of the problem.

Also, a lot of people run air conditioning because they’re concerned about their allergies or asthma, but we need to consider the hypotheses that say that the current epidemic of those conditions is partly caused by lack of outdoor exposure to soil and friendly organisms. Maybe if children were out in the yard making mud pies instead of in a cool, sterile environment all day long, they might have a lot more defense against those problems.

I feel like the hardest place to convince people to stop using air conditioning would be in their office buildings, because they feel like they need to be cool to be productive. Is that true?

There have been a number of studies of satisfaction in the office, and they tend to find that far more people are dissatisfied with their office environment than are satisfied, and that far and away the biggest complaints are about the thermal conditions. What is strange about this is that in the summer there are as many people who complain that it is too cold as say it is too hot. But I think that won’t surprise people to hear, because most of us are familiar with this tug of war at the thermostat and with people in July having to take sweaters and space heaters to their offices.

Besides people changing their individual habits, do you feel like the government needs to intervene in the way we use air conditioning?

I think that we need to be changing a lot of the features of our society that have helped make us dependent on air conditioning in the first place. In the end, someone will have to put some very hard limits on energy consumption and emissions overall. However the truth is, people could give up refrigerators or stoves or drive 9,000 miles less a year or stop using electric lighting, but none of those things would cut emissions as much as eliminating air conditioning.

I have a theory that if we could require Congress to meet two days per week during the summer session out under a canopy on the Capitol lawn, that they might want to deal with ecological reality a little more straightforwardly than when they are sitting in the air-conditioned rooms inside.

I have to ask, is the room you’re in right now air-conditioned?

How do you feel?

I’m a bit cold, actually. I would prefer to just open the place up, but you know, we all have co-workers. I was working outside all morning, and when I came in, the air conditioning felt good as it always does when you first go indoors, but now that I’ve been sitting here talking to you, it’s starting to get uncomfortable.

Ryan Brown is an editorial fellow at Salon.