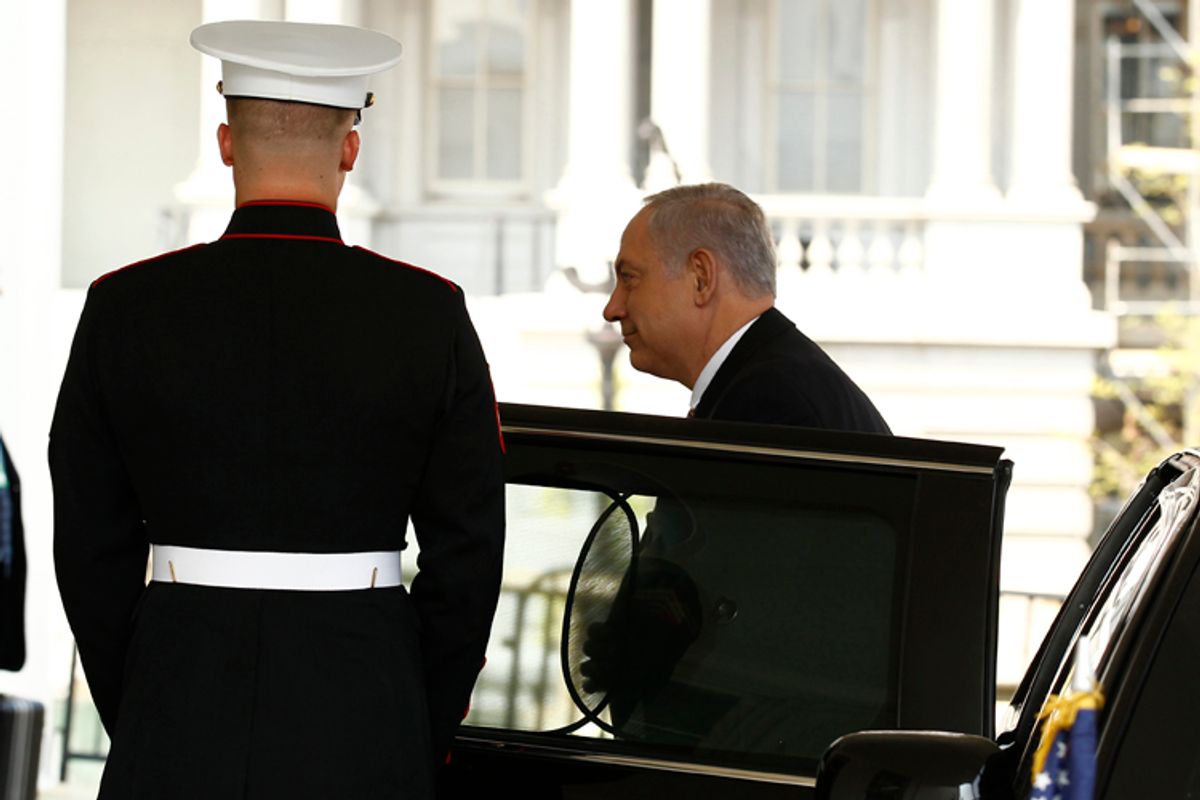 Israel's Prime Minister Benjamin Netanyahu arrives for his meeting with U.S. President Barack Obama in the Oval Office of the White House in Washington July 6, 2010. The two leaders are seeking to show they have turned the page on an unusually rocky period in relations between Washington and its close ally. REUTERS/Kevin Lamarque (UNITED STATES - Tags: POLITICS) (Â© Kevin Lamarque / Reuters)
--

President Barack Obama will meet with Israeli Prime Minister Benjamin Netanyahu today, for the fifth time. At the White House meeting, photographers will take pictures of the two of them next to each other. This will be at around noon. That is basically the point of the meeting, to prove that these two like each other and are working together.

Working together to do what, exactly? That is unclear. Supposedly Obama will not press Bibi on the tough stuff, like extending the West Bank settlement freeze. Instead they will just both decide that direct peace talks would be a good thing, and Bibi will say that he's always been willing to sit down with Mahmoud Abbas but those damned Palestinians won't meet with him.

Some Israeli analysts speculate that Obama and Bibi will negotiate a secret deal to limit construction in the West Bank once the freeze is lifted. That would be very, very stupid, because this Israeli government does not seem to have much respect for this White House and it would presumably just ignore whatever secret arrangement was negotiated. And it would be, strategically, completely right to do so, because it would make them seem more powerful at home and whatever political blowback there would be in the States would hit Obama the hardest -- especially if he had the audacity to not fully support Israel's betraying him.

Netanyahu has no reason to believe that Israel will suffer any significant loss of support from the U.S. if he ignores the wishes of the White House. After all, to celebrate his arrival in Washington, the New York Times has published a story about the many charities that fund and support Jewish settlements in the West Bank. The nonprofits are funded by tax-deductible donations. This means, according to the Times, that "the American Treasury helps sustain the settlements through tax breaks on donations to support them."

The Times identified more than 40 groups that have raised more than $200 million to fund settlements that are technically illegal under Israeli law. One group was run by Jack Abramoff -- it financed "a paramilitary operation in the Beitar Illit settlement." Other groups are supported by American evangelical Christians, like John Hagee.

Of course, as in its coverage of the extracurricular activities of young white people in Brooklyn, the Times is a bit late to the party. Other journalists have been investigating these charities for more than a year. And, obviously, the State Department and the IRS have known about them for years, but haven't yet done anything about all this tax-deductible money going to violent extremist rabbis and settler militias.

Even when prominent American officials offer justified criticisms of Israeli policy and actions, they cover their asses by undercutting their message. Remember when then-CentCom commander David Petraeus submitted testimony to the Senate Armed Forces Committee last March that pointed out the obvious truth that unconditional U.S. support for Israel endangered American forces and made us enemies in the Muslim world?

Instead of working to bring these necessary truths into the political mainstream, Petraeus apparently coordinated with neocon writer Max Boot to undermine his own testimony. Petraeus' openness with reporters (and even citizens who find his e-mail address) is admirable, and it's in part responsible for his amazing reputation in D.C., but this was straight-up political activism.

And the continued inability of any grown-up member of the American political elite to offer any critical opinion on our "special relationship" with this Israeli government is just another reason to be very pessimistic about this White House meeting, and the peace process as a whole.

(Oh, Netanyahu's government has released its new list of things that you are allowed to bring into Gaza. It's enough to keep Gaza residents fed, but with enough still banned to prevent Gaza from reestablishing any sort of industry. Nice work.)