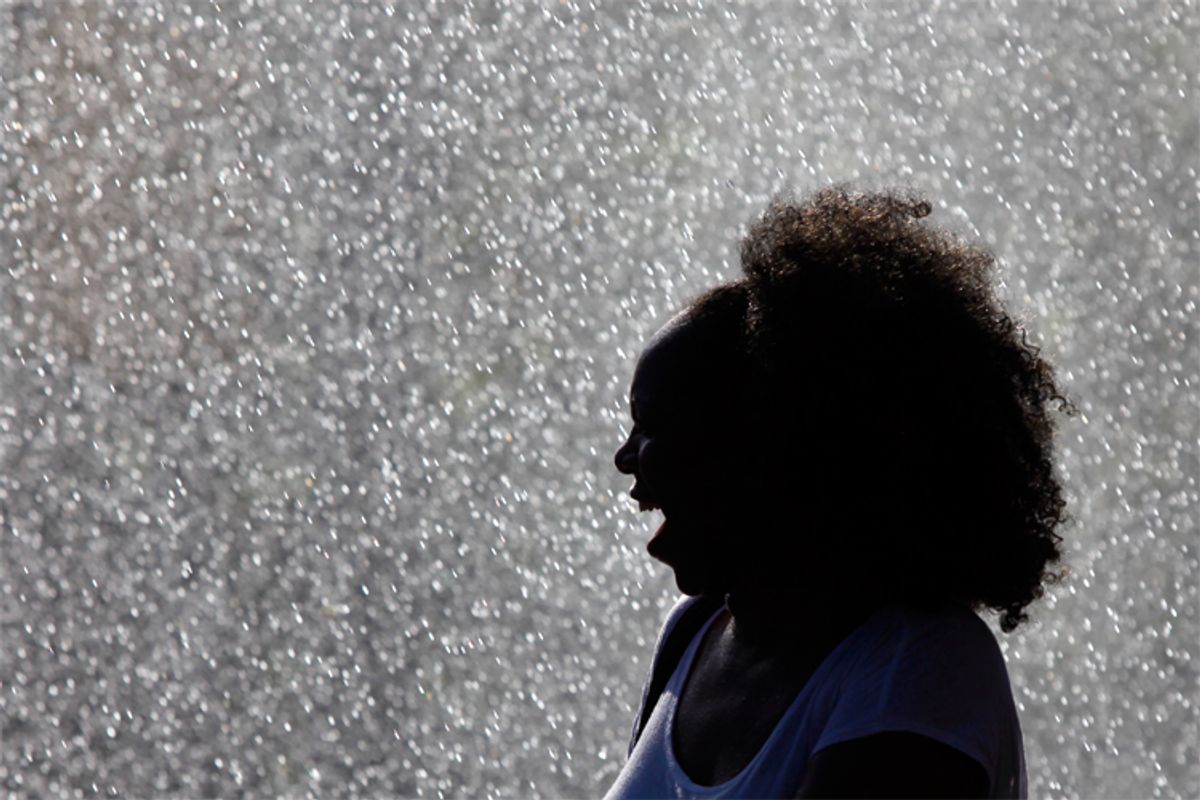 An unidentified woman cools off from the heat of the day under water sprayed from a fire engine in Philadelphia on Sunday.
--

Living in Berkeley, Calif., it can be difficult getting excited about the weather back East. Every blogger on the East coast in my RSS feed has been moaning and bitching about the record-breaking heat wave, but in Berkeley, I was wearing a sweater in the mid-afternoon and the thermometer hadn't broken 60. And guess what, the exact same conditions prevailed during the great Snowpocalypse-ageddon earlier this year. So while Washington and New York convulse in cataclysms of sweltering heat and pounding blizzards, in the Bay Area we just hope the fog lifts, eventually.

But it's sure hard to ignore the blogging/Facebook/Twitter clamor. Any extreme weather event nowadays immediately brings up a consideration of its relationship to climate change and heat waves are especially conducive to such chatter. On this point, liberal-minded bloggers have been boringly unanimous in their careful equivocation. Nearly every single commentator takes pains to note that no single weather event can be conclusively tied to climate change. At the same time, it would be criminal not to observe that this year, so far, is on track to be one of the warmest years on record, and blistering heat waves are the kind of thing one might naturally expect as temperatures rise. (China, by the way, is also experiencing a record heat wave this week.)

Contrast this measured treatment to the outpouring from right-wing bloggers during the winter snow storms, when the impressive precipitation was immediately seized upon as evidence that global warming was indisputably a crock. And not just by bloggers! Conservative politicians were quick to follow along. South Carolina's Jim DeMint tweeted: "It's going to keep snowing in DC until Al Gore cries 'uncle.'" Sen. James Inhofe's grandchildren built an igloo with a sign on it proclaiming it "Gore's New Home."

But so far as I can tell, Inhofe and DeMint are keeping mum on the great East Coast heat wave. Their twitter-streams are silent. The joking banter is nowhere to be seen. Maybe they're suffering heat stroke from too much time out under the sun during July 4th BBQs, or maybe they're just so confident that climate change legislation is dead in the water that they don't even feel defensive.

Whatever the case, I can't, of course, pretend that I expected Inhofe or DeMint to retract their fervent belief that global warming is a hoax just because New York air-conditioner-driven electricity consumption may have broken a one-day all time record today. But where are the Democratic ripostes? Why isn't Senator John Kerry tweeting something lame like : "It's so hot I can feel Congressional resistance to cap-and-trade melting away"? Why isn't Barbara Boxer tweeting: "California Gurlz showdown: Heat wave will melt Carly Fiorina's climate skeptic popsicle for sure."?