Why the art world hates "Work of Art"

Insiders can't stand the new Bravo show. But are they just afraid that its contestants will succeed? 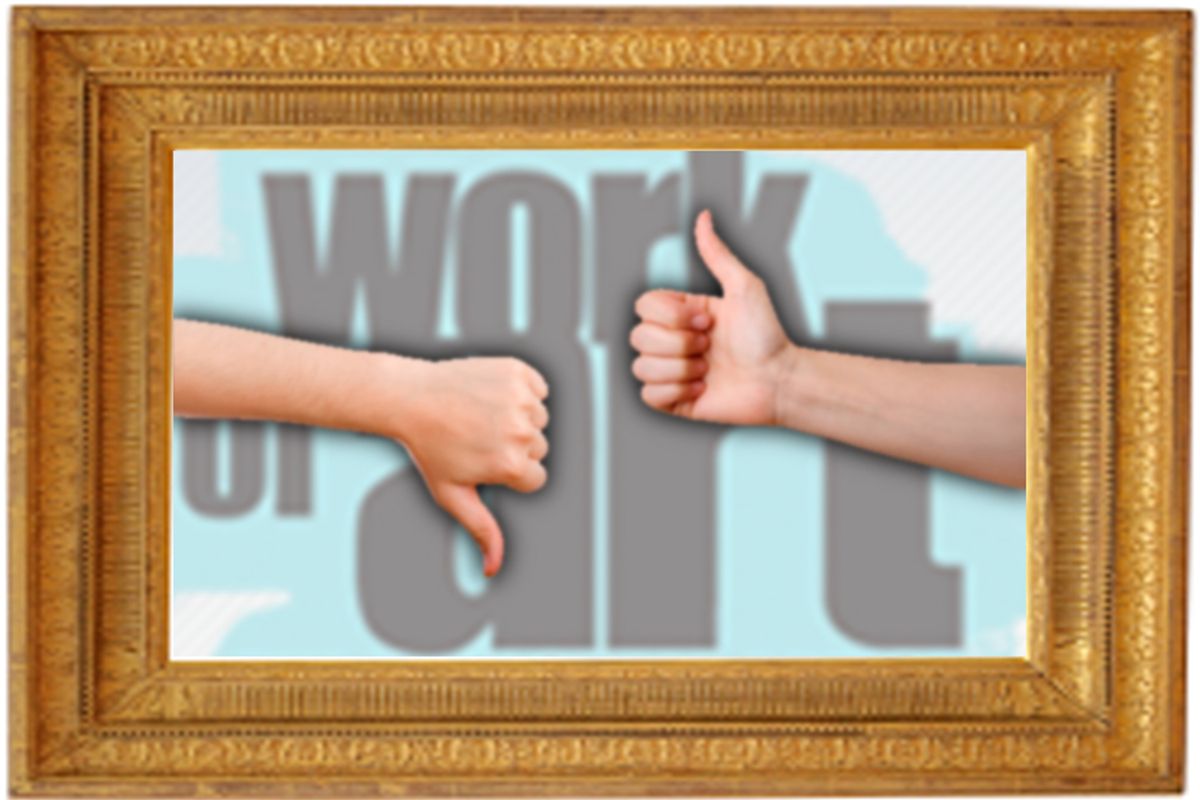 Is the art world too sensitive to see itself in the corrosively shiny veneer of reality television? To hear artists and art critics kvetch on blogs, in the arts press and at art openings, it appears Bravo’s new series, "Work of Art: America’s Next Great Artist," is ruffling feathers.

"Just watched 1st epi of bravo's 'work of art.' truly terrible," wrote an artist friend in her Facebook post. "What's with all the painters? and since when did 'i can't sell this' become a valid critique?" Jenn Graves, art critic for Seattle’s Stranger, emphatically concurred: "The show was horrible. Really, truly awful. Critic Jerry Saltz was the biggest disappointment for me: Is it the editing, or does he really believe that the mission statement of art is, 'Art is a way of showing the outside world what your inside world is like.' So is vomiting." "The overall quality of artist-crew is at best uneven," writes Regina Hackett in ArtsJournal. Even one of the show's judges, the aforementioned Jerry Saltz, noted his ambivalence in a New York magazine blog posting: "Art on TV and in movies always comes off creepy."

Contemporary art has never quite jibed with mainstream media. Art, it seems, gets close to the mainstream only when it combines big money and pop iconography — Damien Hirst, Banksy, Jeff Koons, or the perennial Andy Warhol, who famously cameo-ed on "The Love Boat." But the show has somehow recruited major auction house kingpin Simon de Pury as the mentor figure, and persuaded the venerable Brooklyn Museum to host a solo show of the winning artist (a longtime museum trustee resigned in protest against the Bravo partnership). Both are participating in the show despite the risk of being called "sellouts," one of the art world's biggest insults.

Part of the reason art so rarely flourishes on TV is that most artists are reluctant to be represented in the mainstream media. Just hearing people on television discuss "the work" in art-world lingo, makes us art-world denizens shudder: In the context of highly formatted cable entertainment, it sounds put on and pretentious. The judges on "Work of Art," for example, look for art that makes them "feel" ("Your art didn’t make us feel anything” being one of host China Chow’s steely dismissal lines), and then there are the clownish, obviously expensive designer clothes they wear to their so-called crits. It's enough to make you wonder why artists would want to participate (the casting calls attracted hundreds of hopefuls).

Nao Bustamante, a contestant who works primarily in performance and is in the first episode relegated to the egotistical villain role, admitted in a recent interview that her participation came with artistic intent. "I went on as a narrative experiment," she told me, meaning to upset the standard narrative of an artist’s career. One thing you don’t learn on the show is that an art career currently adheres to a chronology: first an MFA, then gallery representation, a string of exhibitions (and maybe sales), a teaching job, a museum retrospective and death (which increases the value of the artwork).

"I wanted to shake up that model, make it uncomfortable," Bustamante said. It’s an artistically honorable sentiment, though it’s fairly clear that her attempts at challenging the system didn't always survive the harsh editing of reality TV. (True to form, "Work of Art" includes archetypal characters familiar to anyone who frequents gallery openings — though "curated" for catty drama potential, leaving out the eggheads and socially awkward artists.)

"Work of Art" attempts to offer an intimate view of the place where artistic creation happens, but it doesn't quite pull that off, in part because it sticks faithfully to the reality TV structure. Like other shows in the genre, the producers make contestants jump through hoops, in accelerated time frames, to make stuff — a format that has very little to do with real-world creative activities. Artists are as likely to make a portrait in nine hours as a chef combining Cheetos and balsamic is likely to make a great meal. In episode 3, the contestants created book covers, a challenge that ignores the distinctions between fine and commercial art. It's no wonder the results weren't very good.

That said, the show does seem to be getting better, and it's unclear what, exactly, the show's harshest critics are so worried about. That "Work of Art" will create the unfounded expectation that artists can produce at the snap of a finger? Or that they might actually appreciate winning that grand prize and getting some air time? Or are they just worried that the "mysteries" of the art world will be exposed to middle America?

To cross over into pop culture, we need art icons who can flourish in public, the way Marina Abramovic — an artist whose power and charisma courts and can withstand the glare of the media lights — did with her MOMA retrospective. Is it any wonder that Jeff Koons, whose work is all about pop sentiment, was the only artist to be mentioned by name — twice — in the premiere? "Work of Art’s" $100,000 prize wouldn’t even qualify as a down payment on one of his million-dollar sculptures, but it is a modest price to pay to put working artists, semi-realistically, on the cultural radar. For that, I plan to keep watching.

Glen Helfand is a Senior Adjunct Professor at the California College of the Arts, a curator and a critic. His writing has appeared Artforum, Art on Paper, the San Francisco Bay Guardian.