Chocolate bread pudding, like our adopted grandma used to make

Back when we were living on cereal, a neighbor taught us the value of tea, sympathy and bread and custard 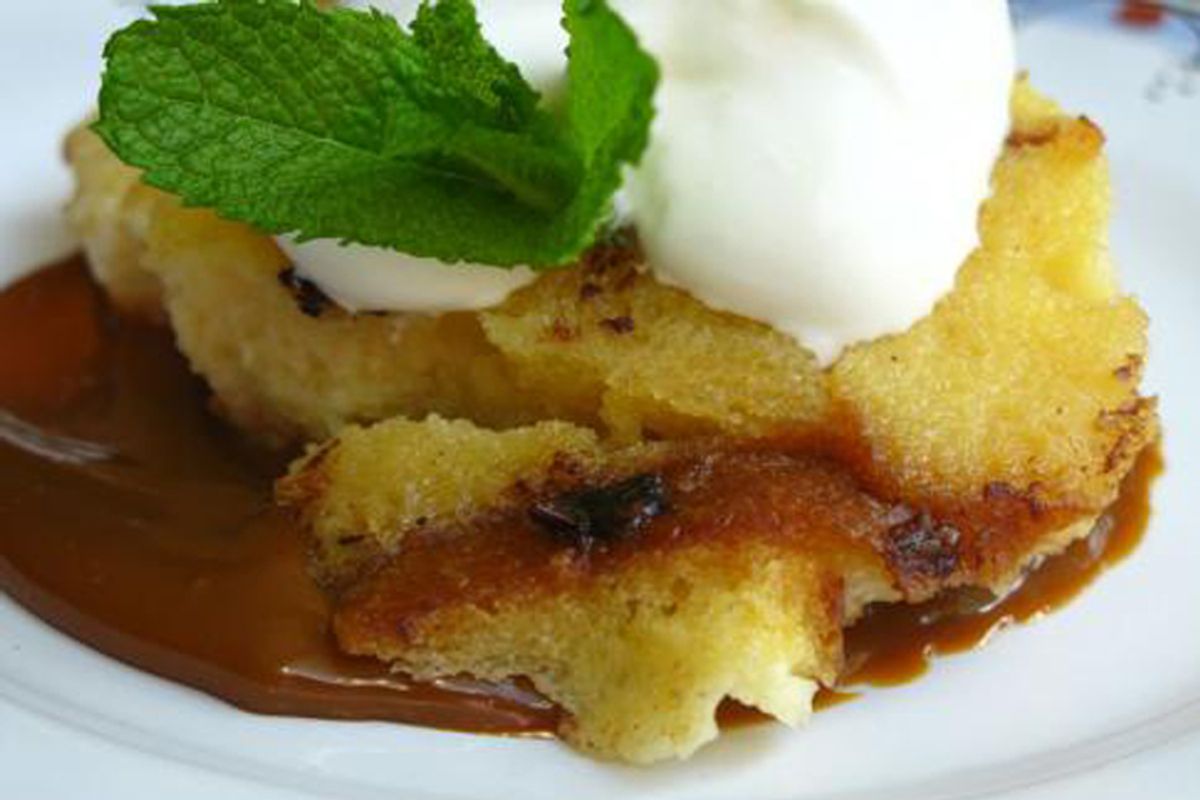 Stashed in the back of our stuffed chocolate cupboard is a well-loved box overflowing with handwritten recipes, food notes and wrinkled wine labels. It's a repository of our life in food -- a truer picture of our history than any ancestral chart.

Dearest to me are the handwritten recipes from our adopted grandmother, 80-year-old Ivy, shared with us when we were teenage newlyweds living in our very first apartment far from our families. It was a simpler time when all we needed was a home-cooked meal to make the world right again. I can even smell that first meal Ivy made for us, although at the time we weren't quite sure what to call it.

Entering the dingy apartment house foyer on that gray, bone-chilling, rainy New England autumn evening, the usual smell of old cat hair and l'eau de musty old building was replaced by the wafting aroma of warm-from-the-oven meatloaf and mashed potatoes. In the dark foyer we almost tripped over the foil-wrapped gift by our front door. It was the very first care-package dinner from our neighbor, Ivy. That meatloaf was love in a 5 x 8 pan.

That same evening, we returned the dishes and shared the first of many cups of tea with Ivy. In contrast to our modest junk-furnished flat, her apartment was a cozy chintz-filled slice of her previous life in England. Though she had been in the United States for decades by then, she still was a very proper English marm in diction, grammar, manners and food-making. That probably explained why her meatloaf was a cross between an American Good Housekeeping recipe and Shepherd's Pie. It was topped with some of the mashers, almost like Ivy couldn't help herself, along with the inclusion of very squishy peas scattered throughout the meatloaf. Nonetheless, it was comfort food to a couple of kids who relied on dry cereal and boxed macaroni and cheese to survive.

Once she caught on that we were not fit to feed ourselves, Ivy left her version of a balanced meal on our doorstep many evenings. We thought she possessed some crazy crystal ball because the food was always piping hot, but we soon realized that from her living room window, she could see us getting off the bus a block away. That gave her just the right amount of time to spirit the dish to our door and disappear like a magic food-elf. She had three or four dishes that were rotated and every single one included squished peas and potatoes. The only one we could not eat, but never told her, was the thing that included canned salmon. Even potatoes couldn't make that dish edible.

Ivy also introduced us to her favorite post-dinner delight, English bread and butter pudding. We ate so many variations of bread pudding, we lost count. Our favorite was tollhouse chocolate chip, again Ivy's way of being half American, half British. The chocolate was warm, gooey and a perfect accent to the mild pudding.

Many chilly winter evenings were over bread pudding and tea, as I snuggled in one of the handmade afghans she was continually crocheting. The blankets were stored in a cedar chest that looked like an antique you'd find at auction deep in the New England countryside, but it had been in her family for generations.

On that late spring day when we said goodbye before moving back to our hometown, we also told Ivy that we were expecting our first baby. Over one last shared pudding, we promised to come back with the baby to visit that next summer. Before leaving, Ivy gave us not only the handwritten recipes, but another gift that we still cherish: the afghan and a bow-covered cedar chest. Thirty-six years later the cedar chest stores not only the beautiful afghan but a tiny crocheted blanket that Ivy made for our first baby. Sadly, that next winter, before we could bring the baby to meet her, Ivy died quite suddenly.

Each one of her handwritten recipe cards begins: From Ivy's Kitchen - Very Small. Her cozy apartment kitchen may have been tiny, but her heart was huge and generous. I've a long way to go before I turn 80, but I hope I can be someone's Ivy one day.

Bread pudding is very forgiving and easy to prepare. Intended to use up old stale bread with a few eggs and milk, the recipe deserves a little update. Use some brioche or challah (egg bread) for a richer flavor and instead of tollhouse chips, chop some bittersweet chocolate. I'm pretty sure Ivy would approve and be thrilled that I finally figured out the purpose of a kitchen.

Notes: Cube the bread the day before and let it sit uncovered overnight. It needs to be slightly stale and dried. A serrated knife will chop the chocolate easily.