Turn the soft, silky vegetable into a creamy souffle or a buttery, rich casserole 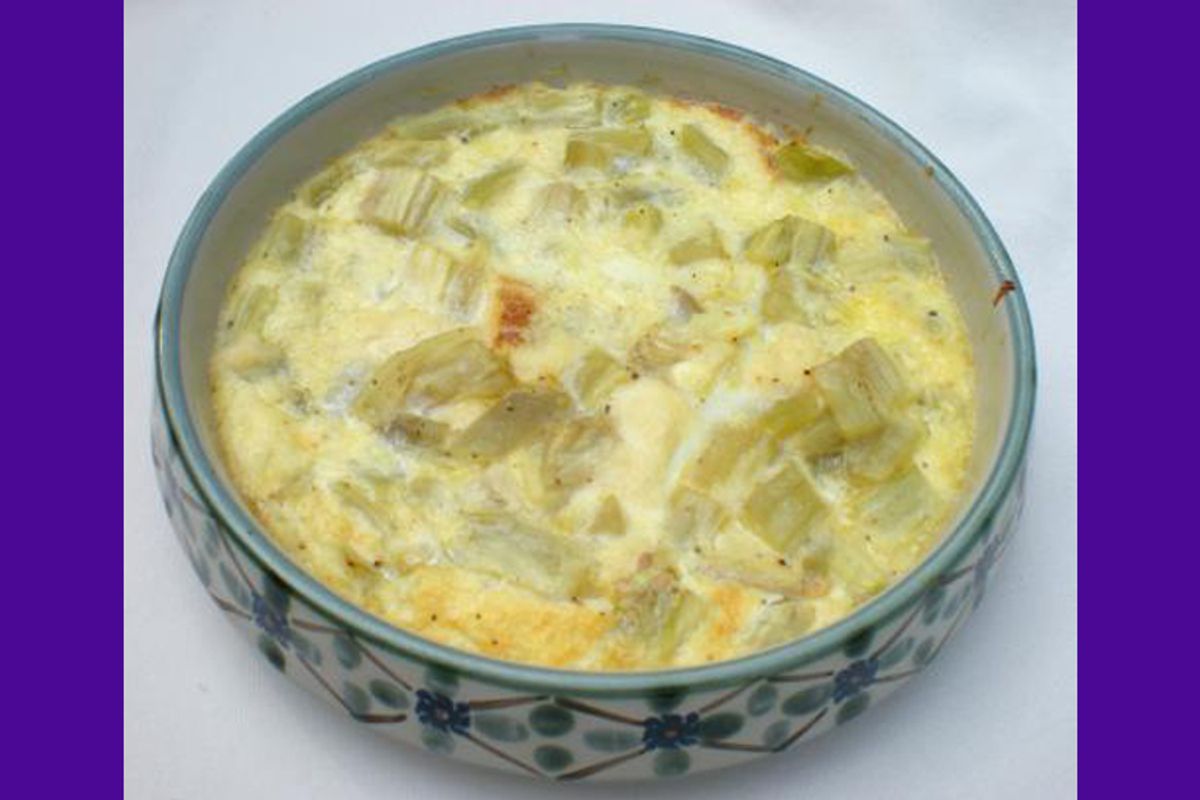 If soft, luxurious silk were a food, it would be eggplant. Maybe not just eggplant, but aubergine. American English can be harsh to the ear; I like the way the Brits use the French aubergine, it even sounds silky. Like silk, the regal eggplant, which is botanically classified as a fruit, is classic in many cuisines: The French have ratatouille, the Italians have Parmigiana, the Greeks have moussaka.

Of course, I can't think of eggplants without remembering the charming writer Laurie Colwin, who wrote an essay titled "Alone in the Kitchen With an Eggplant" nearly 25 years ago. In "Home Cooking," her collection of essays, many of which appeared first in Gourmet magazine, in between "The Low-Tech Person's Batterie de Cuisine"and "How to Fry Chicken," she extols the versatility of eggplant and how she cooked it in her Greenwich Village apartment "approximately the size of the Columbia Encyclopedia." She did this without a kitchen, just a two-burner hot plate.

"When I was alone, I lived on eggplant, the stove top cook's strongest ally. I fried it and stewed it, and ate it crisp and sludgy, hot and cold. It was cheap and filling and was delicious in all manner of strange combinations. If any was left over, I ate it cold the next day on bread."

Just a few years after I first discovered her books, Colwin passed away suddenly at 48 years old. She was known primarily as a novelist during her lifetime, but her food writing has endured, with "Home Cooking" and "More Home Cooking" remaining in print nearly 25 years later. Colwin's homey style lives on in the current trend of food blogging; read Colwin, then Molly Wizenberg on Orangette and you see that the apple fell off the tree and kept rolling. Although I majored in journalism and wrote all kinds of stories, it was when I read Colwin that I said to myself, "This is what I want to write." Marcel Proust relived his past as he contemplated a madeleine; I read about Colwin's eggplant and imagined my future as a food writer.

Back to eggplant: It's a little early in Georgia for the Asian varieties to make it to my supermarket, but the globe variety is plentiful, with the characteristic burnished patina. The Asian eggplants are smaller and have fewer seeds, thus not requiring the salt "degorging" treatment to release the bitterness.

I use the smaller Asian eggplants in late summer to make redneck ratatouille when the overripe homegrown tomatoes threaten to spill their juices all over the kitchen windowsill. Eggplant, peppers and other tasty items from the crisper drawer round up to yield their goodness to the pot. This early in the season, without a tomato worthy enough of the ratatouille ritual, I turn to other preparations, this time to the tried and true Southern Eggplant Soufflé. This recipe takes advantage of eggplant's texture, subtle taste and adaptability.

Forgive me while I tell a brief story about my initial encounter with eggplant soufflé. When I was a young woman with a promising future, I worked for six months for a hotshot P.R. firm in Buckhead, the tony business district in North Atlanta. Actually, it was on the outskirts at the time, in an area called Brookhaven, and it was right next door to a Mary Mac’s To Go where sweaty ladies in white aprons and hairnets scooped Southern classics into styrofoam boxes. The food was divine. As I pointed out my selections, I came to an unfamiliar casserole. "What’s this?" I asked, pointing to the yellow, quivering mass. "Why, that’s eggplant soufflé," the cafeteria lady replied. It didn't look like eggplant, at least not what I was used to: gray or fried. I’d never heard of it, but it had to be OK, because everything in this building was good. I remember a lunch of eggplant soufflé, turkey and dressing, and corn. At the conference room table, I opened my clamshell to reveal all yellow food. And it was delicious.

To this day, I can close my eyes and see down the hallway of B/H/Y Public Relations toward my boss's office. The hallway was lined with sliding glass doors, and every now and then, if the planets aligned properly, someone would ping off a closed door, like a bird trying to attack his reflection. And if I I put my mind to it, I can smell the chicken frying next door at Mary Mac's.

Imagine my joy upon finding Mary Mac's eggplant soufflé recipe online. This is my adaptation and you'll notice that the recipe is more of a custard than a traditional French souffle. Here in JAW-ja, seemingly everything is a soufflé, pronounced SOO-flay.

Adapted from Serenbe Style and Soul with Marie Nygren.

I've written before that my world is small, but my kitchen is big. By that, I mean that I know I'm not particularly well-traveled or well-educated, but I can explore new worlds and learn new techniques in my kitchen. If there's anything I learned from Laurie Colwin's essays, it's that there's magic in the everyday foods that we prepare for our families and that sharing food and recipes builds bonds of friendship.

After making the soufflé, I had three additional eggplants and decided that the world of aubergines deserved more exploration. Enter Cookstalk Classic and Evelyn/Athens. This is a message board that I began participating in about three years ago. Most of the members started at Fine Cooking's Cookstalk board and migrated to Delphi forums. This is a generous group of cooks willing to share their lives and their knowledge; there is a staggering amount of expertise between the professional and home cooks. I could name a few friends and many impressive cooks that I've met through Cookstalk, and I will someday soon, but today I want to mention Evelyn/Athens, a former Canadian now living in Greece. I've never met Evelyn face to face, but this much I know: She is a devoted mother and a first-class cook. She posts her recipes on Recipezaar and they are inspiring and reliable.

A search of Evelyn's eggplant recipes revealed 17 different preparations. I chose Hunkar Begendi, which translated to "Turkish Eggplant Cream," and essentially, it's an eggplant soufflé, down to the thick, buttery roux and cheese. Greek cheeses other than feta are hard to come by in my corner of Georgia, so I subbed Parmesan, with Evelyn's blessing.

With apologies to Fusun Atalay for anything inauthentic, here is:

This is Evelyn's headnote for the recipe: "This literally translates as 'the Sultan's Delight,' and it is that! The first time I had it, I fell in love. Mild, rich, buttery, it perfectly complemented the braised beef (in tomato sauce) that it was meant to accompany. This is a very subtle dish. If you want FLAVOR, look elsewhere. This is flavourful in a more refined way, and also a lesson to our overly spiced palates." I agree.

The quotes are from "Home Cooking" by Laurie Colwin, published 1988 by Knopf. Buy it. Read it. Often.

"Alone in the Kitchen With an Eggplant" is also the title of a food writing collection edited by Jenni Ferrari-Adler. It's a delightful book that includes Colwin's story and another by her daughter, Rosa Jurjevics. Published 2007 by Riverhead.