The eggplant dish that might knock you out (literally) 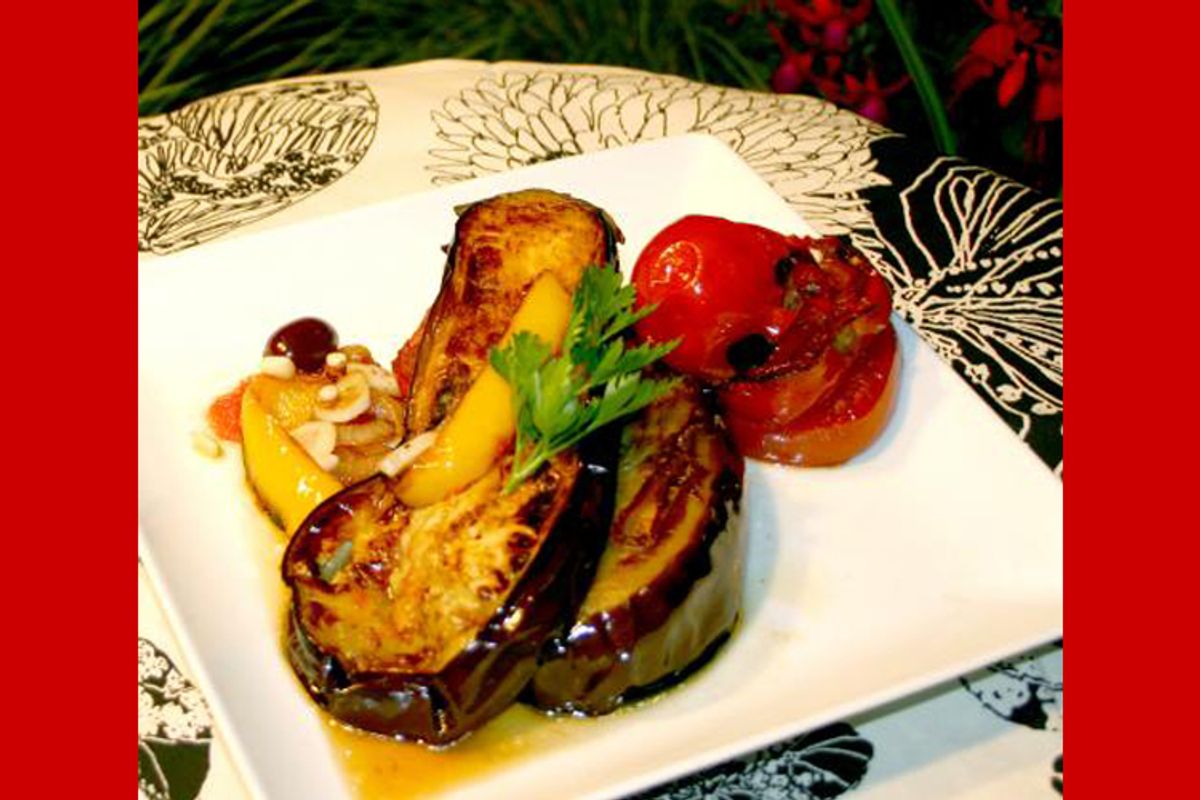 The imam had fainted. It wasn't about a religious quarrel or the stymieing heat. It had nothing to do with armed conflicts, student demonstrations, or the price of gas. The imam hadn't even fainted recently. The famous swoon happened so long ago no one can remember exactly the moment. No one knows who the imam was, what he was wearing (though I like to imagine a long silk caftan), or what he was thinking. The faint wasn't important from a medical point of view and I think the imam came around eventually, asked for cold water, and then went back to his eggplant dinner -- the reason he fainted in the first place.

Some say it was the exquisite taste of the food that did the man in, while others blame the liberal use of expensive olive oil. My own opinion hovers toward taste as the main culprit because I love this dish and I can't imagine my silk-clad imam as a mean, tight-fisted Ottoman Grinch swooning over the liberal use of olive oil. Besides, there's something special about barely fried eggplant baked slowly with onions, garlic and tomatoes until it's as soft as pillows, then piled high on a plate with thick yogurt and a hunk of thick-crusted bread. The bread is my own preference, but I know for a fact the imam would have been served buttered rice.

That's how I had it the first time, on the sunny front porch of a little house, surrounded by endless acres of grapevines and gardens, not too far from the sea. We -- my mother and I -- had come to buy fruits and vegetables, a trip most city dwellers in Romania pulled every fall at least once. There were shortages in the city, the supply that reached the state stores was never enough, and it was never the quality produce that we could get directly from the village.

Our host and his wife tended a garden year-round, and in the fall they sold to a few select and lucky clients. We walked the garden and picked everything we wanted and my mother paid them. She didn't haggle or try to get the price down in any way. How could she? The food we were buying was absolutely luscious, the tomatoes still had the smell of sun and earth about them, and the grapes were as big as my thumbs and covered with a fine bluish dust. Our host showed me how to rub a grape until it shined purple and then pop it in my mouth and make a wish. I did like he told me; the grape was sweet and warm and my wish had something to do with a boy.

Their house was small and pleasant. The "good room" had thick carpets covering every inch of floor and wall, two sofas drowned in silk pillows, and a curio cabinet filled with cut crystal and a large doll in a shiny wedding dress whose main function, attained sometime in the 1960s, was to sit on the hood of the car, a good-luck ornament at their wedding. There were pictures -- weddings and children -- but now it was just the two of them, middle-aged and happy. And of course, their swoon-worthy eggplant dish.

In the shade of their creaky porch I had watched my mother eat the way I've never seen her do before: slowly and thoughtfully, with infinite delight. Normally, she professed utter indifference to gourmet pleasures, hell-bent as she was on making sure her waist stayed at a natural 22 inches -- her size before she had me. Yet here she was, absolutely enthralled by the food on her plate. Our hosts, both sweet and spherical, smiled with glee.

"The imam has fainted," the man said and his wife giggled pleasantly.

It seemed to me my mother could pass out too. She looked congested, and she was still eating. I think she stopped a second before bursting.

Of course she begged for the recipe, and she learned how to make it. The recipe morphed and changed as she went through life and changed herself. For a while it was mushrooms. Then my mother decided she liked chestnuts and baby corn in her iman bayildi. A couple of years ago it got a habañero pepper, seared, skinned and seeded, and a side of tortilla chips. The imam turned in his grave, but she wasn't finished. The "bayildi" acquired a sprinkling of cilantro, a dash of ponzu sauce, and shavings of ginger. I shudder to think what's next.

I cook the dish too, but I don't tinker with it; the original iman bayildi is my bridge to a perfect sun-drenched afternoon, and a late lunch surrounded by acres of grapevines and vegetable gardens.

At my house this dish starts with the clatter of at least three frying pans, and a glass of wine for the cook (me). Sometimes, if there's a bit of wine left in the bottle, it goes into the dish. The recipe doesn't call for it. The better the wine, the less chance it has to make it into the pan.

There's no dicing, pounding, straining, mixing or chopping for imam bayildi. Everything's peeled, sliced and lightly fried in olive oil, then artistically arranged in a baking dish and left in the oven for about 50 minutes.