Has immigration really been the GOP's problem? 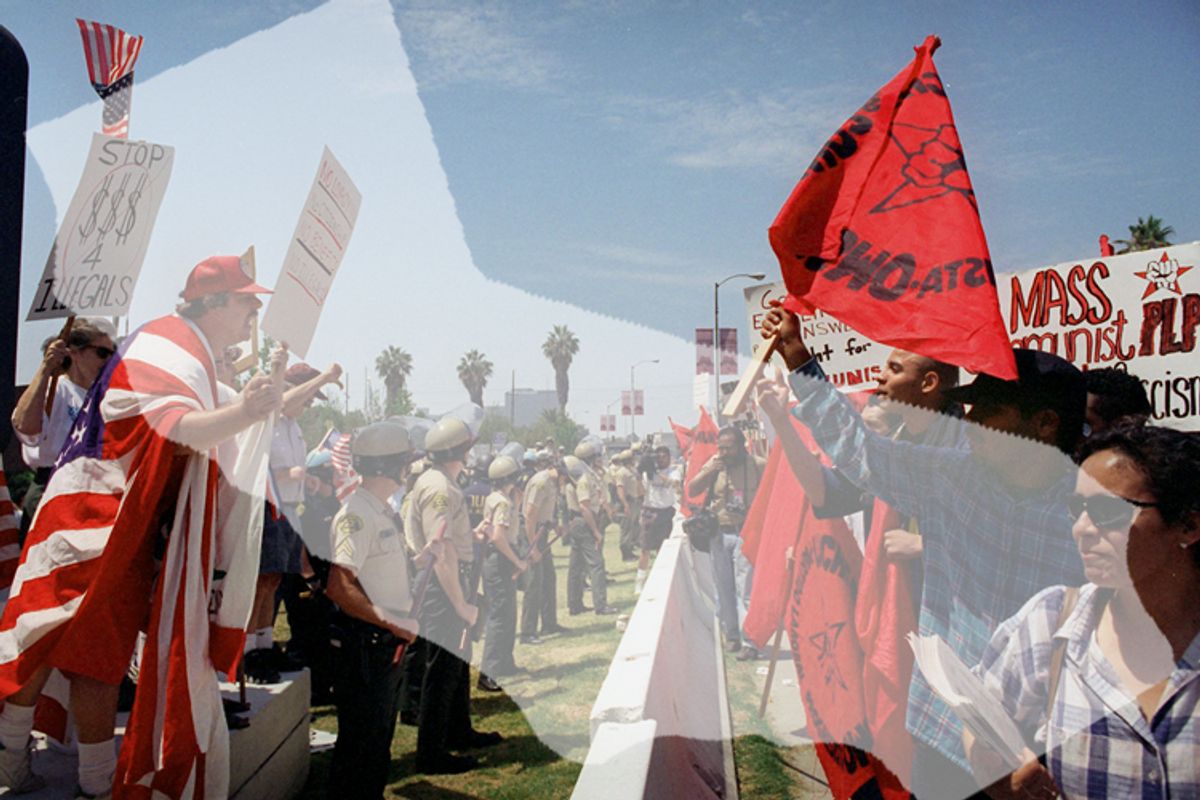 Pro (left) and con Proposition 187 activists are separated by police during a rally in Los Angeles in 1996.
--

You’re probably familiar with the parallels that have been drawn between Arizona’s new law, which is largely supported by top Republicans, and California’s old Proposition 187, the 1994 ballot measure that sought to bar state services for illegal immigrants and their children.

That initiative was embraced that year by Republican Pete Wilson, who used it to pull off a comeback victory in his gubernatorial reelection bid. The idea is that Prop. 187 ruined the California GOP’s relationship with Hispanic voters and destroyed the ability of Republicans to win in the state, and that Arizona’s new law (and the national GOP’s overall tone on immigration) will have a similar effect across the country. As NBC’s First Read put it today:

Prop. 187 turned out to be popular in the short term, and it helped Wilson win in a landslide in '94. But as NBC pollster Peter Hart (D) reminded us, Democrats won California just ONCE in presidential contests from 1952 to 1988. But after Wilson’s Prop. 187, Republicans haven’t come CLOSE to winning the nation’s biggest state. It's not even remotely close to being a swing state.

On the surface, Hart’s claim is valid and compelling. But it’s worth looking at it a little more closely, given how much Democrats are expecting from their immigration strategy.

Yes, it’s absolutely true that the GOP’s performance in California dropped like a rock after 1994, when Wilson defeated Kathleen Brown decisively. But was immigration really the main reason? Certainly, it played a role. In the 1992 presidential election, when he won the state with 46 percent of the statewide vote (in a three-way race), Bill Clinton snared 51 percent of California’s Hispanic vote. In 1996 (still technically a three-way race, but with Ross Perot a reduced presence), he nabbed 51 percent of the statewide vote and 75 percent of the Hispanic vote.

The impact of Hispanics was felt down-ballot as well. 1996 was the year that Robert Dornan, the fire-breathing Orange County Republican congressman, lost his seat to Loretta Sanchez. And it was also the year that Cruz Bustamante was elected the speaker of California’s Assembly.

Moreover, there was dramatic movement across the country in ‘96 by Hispanic voters to the Democratic column, with Clinton becoming the first Democrat since Jimmy Carter to carry Florida and the first since Harry Truman to win in Arizona. In Florida, the Hispanic vote was evenly split between the parties -- a feat for Democrats, given the historic bent of the state’s Cuban community to the GOP. And in Arizona, Hispanics favored Democrats at a 10-to-1 clip.

But this isn’t the whole story, because after ’96, the trend slowed down considerably. In 2000, George W. Bush won Arizona comfortably, and he increased his margin in 2004. He also won back (well, sort of) Florida in 2000 and increased his margin there in ’04. Nationally, Bush grabbed more than 40 percent of the Hispanic vote in ’04. It wasn’t until Bush’s push for immigration reform in 2006 and 2007, a move designed to lure Hispanics into the GOP fold for good, that the nativist sentiments that had defined the national GOP in ’94 and ’95 returned to the fore.

And yet, in all that time -- after Prop. 187 had become a memory and while Bush was racking up Reagan-like numbers with Hispanic voters -- California was still off limits to the GOP. In 2000, Bush lost the state by 12 points and in ’04 he lost it by ’10 -- essentially, no better than the 13-point defeat that Bob Dole suffered in the state in ’96.

This is why it’s important to understand that something else happened in 1994, besides Prop. 187, to spoil the GOP’s chances in California and in many other states for the next 15 years: the Gingrich revolution.

The Republican takeover of Congress in 1994 fundamentally altered the relationship of swing voters in culturally liberal states to the national Republican Party. For years, they had bought into the concept of the GOP as a “big tent,” but the emergence of Gingrich and his band of ideologues -- many of them from the South, many of them fundamentalist Christians -- shattered the illusion. Just as the Gingrich revolution was a product of a partisan realignment (Southern conservatives slowly leaving the Democratic Party for the GOP after the Civil Rights Act of 1964), it also spawned one: For the next decade-and-a-half, swing voters in states like California shunned the GOP label in federal (and often state) elections.

Consider New Jersey. Except for 1960 (when Richard Nixon won California with 50.1 percent and lost New Jersey with 49.16 percent), the Garden State and the Golden State voted the same (and by similar margins) in every presidential election from 1952 to 1988, almost always for the GOP, in other words. And both states haven’t voted Republican in a presidential election since then.

1994 was clearly the turning point in both of them. In 1992, Clinton squeaked out a win in New Jersey by 2 points. In 1996, his margin shot up to 18. There was a clear backlash against the Gingrich revolution, a backlash that continued into the 2000s, as Bush played up his religious faith and his cultural conservatism. The best the GOP has done in the state since the ’94 Gingrich revolution was Bush’s 7-point loss in 2004.

And we’ve seen the same story in other states with culturally liberal swing voters. For decades, Democrats couldn’t win Vermont at the presidential level. Bill Clinton won it over in ’92, and it’s been a cinch for the party ever since. Republicans had won Illinois in six straight presidential elections until Clinton carried in it ’92. It hasn’t been close since then. And on and on.

The Gingrich revolution sharpened the basic cultural and ideological differences between the parties and made it tougher for voters to stand in the middle. As a result, culturally conservative states (i.e., the South) painted themselves deep red. Culturally liberal states went deep blue, even if they’d been voting for Republicans through the 1980s. That’s the bigger story in California for the past 15 years.

Its relevance this year is clear: With Democrats -- for the first time since before the Gingrich revolution -- now controlling the White House and both houses of Congress, there is potential for Republicans to win in blue states, at least in 2010. The reason is simple: When one party controls everything, the other party functions for swing voters primarily as a protest vehicle, especially in midterm elections.

This is why, for instance, it’s no coincidence that Massachusetts went and elected a Republican senator in January 2010, something that simply could never have happened between when Newt was the speaker or Bush was the president. And it’s why, for all of the GOP’s very real long-term problems with Hispanic voters, polls show Republicans Carly Fiorina and Meg Whitman with reasonable chances to win in California this year. That’s not something that would have been plausible a few years ago -- and it probably won’t be plausible a few years from now, when the GOP will once again be seen by swing voters as something more than a protest vehicle.