It's depressing that $743 million couldn't buy something more exciting than JetBlue's new terminal. Plus, wild JFK 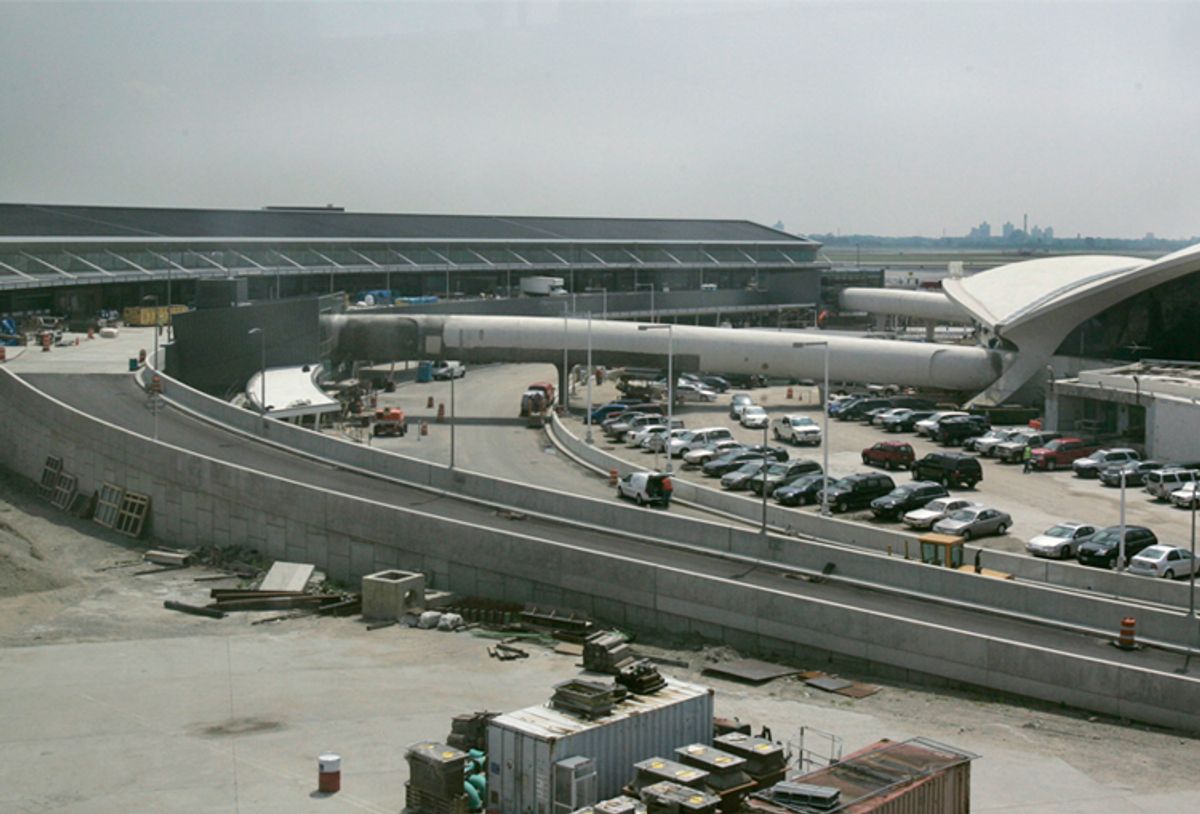 Is it just me, or is JetBlue's Terminal 5 -- or "T5" as the airline likes to call it -- at JFK airport one of the ugliest commercial buildings in the United States? The $743 million, 72-acre structure opened in 2008 to considerable promotion and fanfare. Of what, exactly, is the airline so proud?

On the inside the facility is merely generic. The crescent-shaped ticketing lobby is spacious and bright, while the atrium food court and rows of shops conspire to make yet another airport feel like yet another shopping mall. It's the exterior that's the greater shame. Writing in February 2009, I called it "nothing if not dull."  That was being generous.

The streetside facade is at worst cheerless; the tarmac side, on the other hand, is truly abominable -- a wide, low-slung, industrial-brutalist expanse of concrete and gray. Once again it looks like a shopping mall. Or, to be more specific, it looks like the back of a shopping mall. All that's missing are some pallets, dumpsters and heaps of baled cardboard.

You can argue that the airside facade isn't important. I couldn't disagree more. Passengers do look out the windows, and this was the airline's chance to leave a lasting impression on tens of thousands of people taxiing past each day, many of them JetBlue's own customers. As it turns out, the facility's only visual statement is one of not caring, a presentation of architectural nothingness, absolutely empty of inspiration -- precisely what an airport terminal should not be.

Three quarters of a billion dollars, and they couldn't have designed something a tad more exciting? Take a moment to compare it to some of the recent airport projects in Asia and Europe. If you ask me, T5 is a sad testament to a dwindling sense of American vision and imagination. Considering the cost and effort, is there a more disappointing airport building anywhere in the world?

It's ironic, and maybe a little depressing, that Eero Saarinen's landmark TWA terminal, arguably the most distinctive airport terminal ever built, sits directly in front of T5, itself part of the JetBlue complex. I'd like to tell you that T5 and Saarinen somehow complement each other, but they don't.

Not all the news out of Kennedy is so depressing. Last week the airport reopened runway 31L/13R to commercial traffic following extensive renovations. The $350 million project wrapped up ahead of schedule and, get this, under budget.

At more than 14,500 feet, the runway is among the world's longest, and is the most heavily used at JFK.

Things ran more smoothly than was anticipated during the four-month closure. Thanks in part to airline schedule adjustments and a taxi metering program, delays weren't nearly as severe as some had predicted. I flew out of Kennedy regularly during the reconstruction, and congestion was marginally worse than normal.

I made my first landing on the reopened strip the other day. The most obvious difference from a pilot's perspective is that the runway is now topped with concrete instead of asphalt. The lighter color makes it easier to see from a distance, which is helpful during visual approaches.

The numbers "31" and "13" refer to the runway's compass orientation, as seen from either end, minus the zeroes. Taking off or landing toward the northwest, it's runway 31 (310 degrees; facing northwest). From the other direction, it's runway 13 (130 degrees, facing southeast). The L and R mean left and right. There's a parallel runway, designated 31R/13L, on the opposite side of the terminal complex.

Elsewhere in the media I keep seeing 31L/13R described as JFK's "bay runway." This is a reference to its position along the edge of Jamaica Bay. I like the idea of a runway having a name as well as a number, but, for what it matters, I've been flying out of JFK for years and I never heard that term until a week ago.

The runway is one of two at JFK -- the other is 22R/04L -- that abut the Jamaica Bay Wildlife Refuge, a 9,000-acre section of the Gateway National Recreation Area. Wildlife and airplanes aren't a good mix, but these runways provide some surprising birding opportunities. Once, while taxiing for takeoff, I saw a pelican coasting along the shoreline just off our wingtip. The other day, taxiing in from runway 22R, an osprey flew right-to-left just in front of us. It couldn't have been more than 20 feet away, with a fish clutched in its talons.