Lohan's future on hold until jail, rehab are done

Colleague refers to the troubled performer as a "remarkable artist" 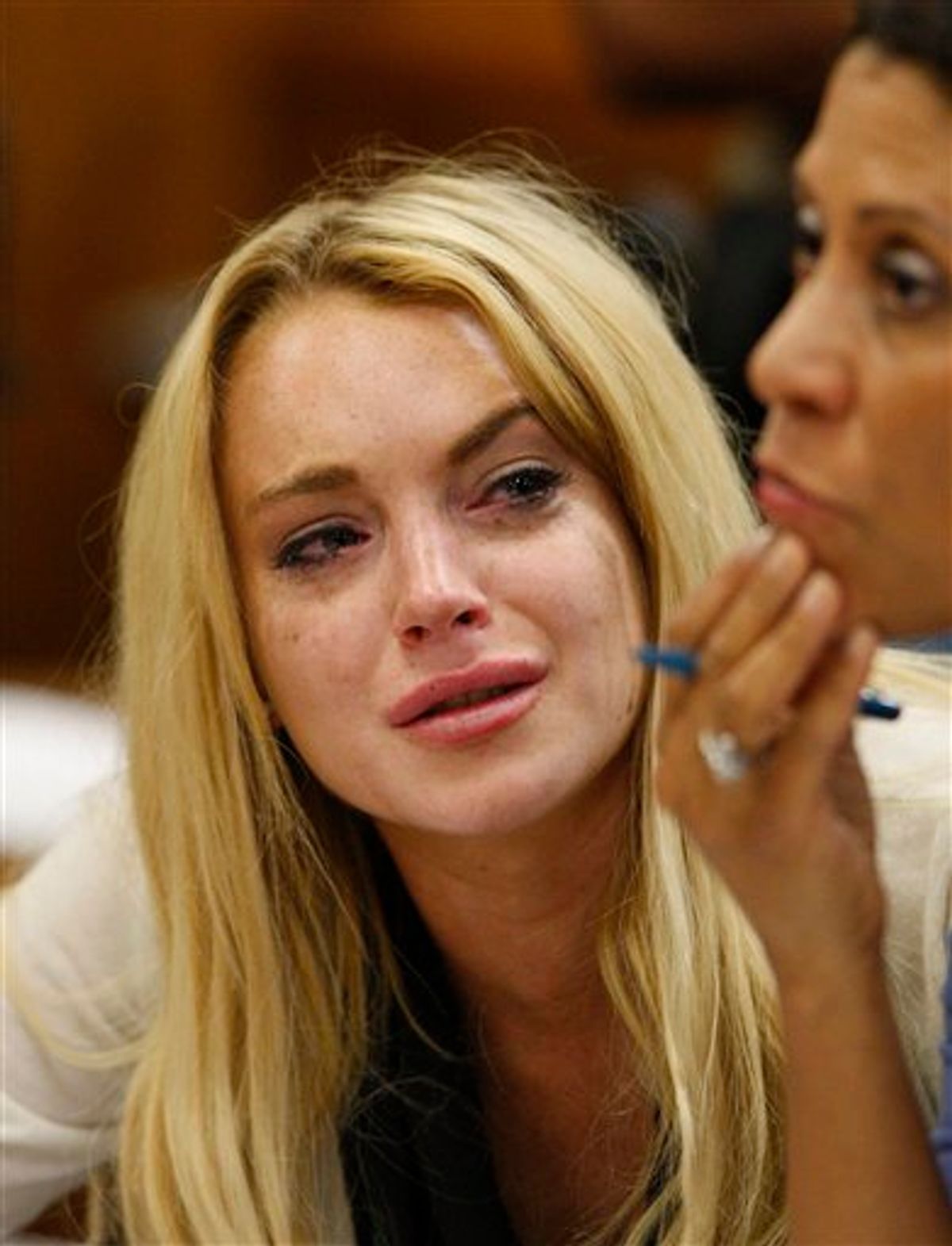 Lindsay Lohan's future includes a new fashion line, two new movies, some time in jail and another stint in rehab.

The actress was sentenced Tuesday to 90 days in jail and 90 days in a residential substance-abuse program for violating her probation stemming from two separate 2007 cases of driving under the influence of cocaine and alcohol. She is to surrender and begin her jail sentence July 20. Rehab will follow.

The punishment, levied by Superior Court Judge Marsha Revel, will keep Lohan from promoting "Machete," the Robert Rodriguez action film due in theaters in September. Fox, which is releasing the film, had no comment Tuesday.

Lohan's jail and rehab sentence will also delay production on "Inferno: A Linda Lovelace Story," in which the 24-year-old actress plays the starring role.

Writer-director Matthew Wilder said after the ruling that he and his crew remain "100 percent behind Lindsay."

"We are proud to have this remarkable artist work on our film," he said.

Lohan's sentence may also prevent her from further promoting her new fashion line, 6126. The first items from the 280-piece collection are shipping out to department stores nationwide this month. Lohan was instrumental in the line's design and marketing plans and is featured in its promotional materials. Her business partner, Kristi Kaylor, did not immediately respond to phone and e-mail messages seeking comment.

Lohan's agent, Nick Styne, declined to comment Tuesday. Her manager, Jason Weinberg, did not respond to an e-mail request for comment.

Kerry Wallum, a producer with Lucky Films, said Lohan was in negotiations for a role in the upcoming Willie Nelson flick, "The Dry Gulch Kid," and that the production would wait for her if she wanted the part.

"We're behind her," he said Tuesday. "We'll wait until all of this blows over."

Revel chastised Lohan for missing a court hearing in May while at the Cannes Film Festival and repeatedly skipping out on court-mandated alcohol-education classes. She said Lohan lied about using drugs and tried to blame others for the two driving offenses when the original charges were filed.

A tearful Lohan pleaded with the judge before the sentencing, saying she did the best she could to juggle jobs and the court-ordered classes and really tried to comply with the terms of her probation.

"I'm not taking this as a joke," Lohan said. "It's my life. It's my career I've worked for my entire life."

Revel said she found the starlet's apology insincere, comparing it to "somebody who cheats and thinks it isn't cheating if she doesn't get caught."

Lohan burst into tears upon hearing the terms of her punishment. Her sister, Ali, and father, Michael, were also in the courtroom and cried after the ruling.

Lohan spent 84 minutes in jail in 2007 after she pleaded guilty to two misdemeanor counts of being under the influence of cocaine and no contest to two counts of driving with a blood-alcohol level above 0.08 percent and one count of reckless driving.

The plea came after a pair of high-profile arrests earlier that year. Lohan was sentenced to three years of probation but had to ask for a yearlong extension in October after she failed to complete her alcohol-education courses on time.

Prosecutor Danette Meyers argued Tuesday that Lohan wasn't taking the charges or her punishment seriously and urged jail time for the actress.

"You have not caught her attention," Meyers told the judge. "I appreciate the tears, but I don't think you've got it."

Lohan's attorney, Shawn Chapman Holley, claimed that the actress had adhered to the spirit of the law, if not the letter.

"She has gotten it together," Holley said. "She changed her conduct and is now in compliance with the court's overall order."

Lohan may serve less than her 90-day sentence, thanks to jail overcrowding and a state program that credits inmates for good behavior, said Los Angeles Sheriff's Department spokesman Steve Whitmore. Nonviolent female misdemeanor offenders typically serve about 25 percent of their sentences, he said.

Lohan will be taken to the Century Regional Detention Center -- the same jail that housed Paris Hilton for 23 days in 2007 after she was found guilty of driving on a suspended license while on probation in an alcohol-related, reckless-driving case.

Lohan's jail sentence could impact a civil lawsuit filed after Lohan's second arrest in 2007. A woman in a car chased by the actress sued for infliction of emotional distress and the case is scheduled to begin trial a week after Lohan surrenders.

It is unclear how much of the trial Lohan would have attended, although she is listed as a potential witness in the case. A hearing was set for Wednesday in Beverly Hills.