On "activist judges," the right and left switch sides

Voices on the left are suddenly calling for judicial restraint. Are they throwing gays and lesbians under the bus? 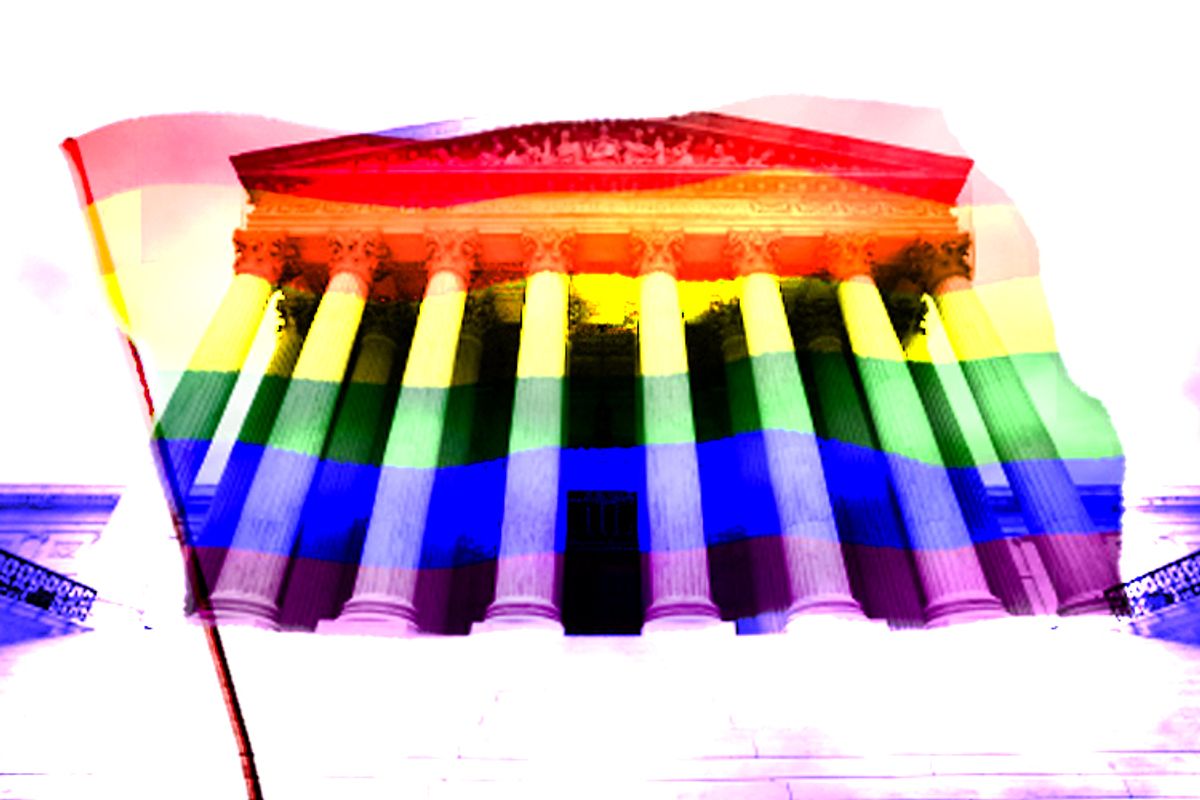 Liberals and conservatives agree on one thing: They were each wrong before. Now that the conservative-dominated Supreme Court has struck down state and municipal gun laws, and as it faces the prospect of a challenge to healthcare reform, conservatives are embracing the very judicial activism they used to decry.

At the same time, liberals are decrying the practice of overturning legislative judgments for constitutional reasons, a practice they once defended. Lions of judicial restraint like Learned Hand and Oliver Wendell Holmes, long missing from the columns of liberal commentators, are enjoying a resurgence, while the heroes of the civil rights left are notably missing from the exemplars of judicial excellence.

In the New Republic this week, E.J. Dionne praised Kagan's "judicial philosophy that sees the courts as having an obligation to defer to the choices of elected officials except in the most extreme cases," suggesting that the Democrats had given the people reason to believe they were elitists, and only now, as they abandoned oversight of the legislatures, could they be considered "small d democrats." And this spring Jeffrey Rosen, long a renowned critic of Justice Harry Blackmun's abortion decision, went out of his way to debunk the "heroic" story of Justice Thurgood Marshall's signature accomplishment, the 1954 Brown v. Board of Education ruling. Liberals just liked to extol judicial heroics, Rosen opined, in the hopes that the "justices would fight their battles for them."

The ground rules for the court's relationship with the other branches and the states go back to 1937. The court acted to save itself from Franklin Roosevelt's plan to create a bunch of new justices (the "court-packing plan") by backing away from invalidating the New Deal. In what came to be called the "switch in time that saved nine," the court held that when the federal or state governments regulate the economy, their actions need only be rational and not arbitrary. Only civil rights cases involving the core provisions of the Bill of Rights or the constitutional mandate of equality trigger a closer look. Obeying those rules of the game, today's conservative majority has invoked the Second Amendment to strike down local gun restrictions and used the free speech guarantees in attacking campaign finance regulation.

Hardcore conservatives learned to live with the "switch in time" deal, but they never really reconciled themselves to giving economic regulation a pass. As conservatives have come to dominate the federal courts, their disaffection has become increasingly clear. Recently, conservative judicial activism has taken a turn toward invalidating unambiguous exercises of the federal commerce power unrelated to civil rights. In the most notorious case, Louisiana District Judge Marvin Feldman, a Reagan appointee, stopped the Obama administration's suspension of new and exploratory deep-water drilling. Noting that the ban would cost jobs, he ruled that the federal government couldn't justify such a harmful impact simply by connecting the unexplained failure of one rig to the possibility that other rigs might fail. Without better reasoning, the judge ruled, the law would violate the due process clause. Feldman is a lowly district judge, but the logic behind his ruling does not bode well for the regulatory state -- especially when you consider that conservatives contend that healthcare reform also threatens jobs and rests on an irrational misreading of what is wrong with the current healthcare system.

Liberals are right to be concerned. But the new liberal embrace of judicial deference to the legislative branch also has the bizarre and unexpected consequence of requiring the sacrifice of the interests of American’s gays and lesbians. The situation arises because, just as liberals discover their inner judicial deference, plaintiffs in at least three federal cases have asked the courts to strike down laws against same-sex marriage and the military's ban on openly gay service members. In these cases, the plaintiffs contend that the laws don't meet the minimum standards of reasonableness that apply to any regulation.

The plaintiffs also argue that gays and lesbians are a minority under the equal protection provisions of the Constitution. If they win that point, then the laws will probably fail, under the high standards of review for discriminatory legislation. But since the court has never ruled that gays and lesbians are a minority like African-Americans, the gay plaintiffs are arguing that the laws against them are so irrational that they cannot survive even the deferential scrutiny of legislative action the courts use under the 1937 New Deal standard.

In the California gay marriage case, Perry v. Schwarzenegger, the plaintiffs' lawyers, David Boies and Ted Olson, reduced the defendants to arguing that the prohibition against gay marriage should be sustained because the California voters had an unprovable fear that gay marriage might harm heterosexual marriage -- even though all experts agree there is no proof at all that it will. In a challenge to "don't ask, don't tell," a federal judge in Virginia ruled just last Friday that she would not confine the proof to whether Congress could have been rational when it passed the law in 1993. She's going to allow evidence about what the real purpose of the law was and whether the law turned out to accomplish its goals. The Virginia case will be the second procedure to expose the toxic contentions that fuel such legislation to the sunshine of a common law system of proof.

"Many of the leading gay and lesbian organizations have argued against bringing these cases to the federal courts, fearing that the courts will not want to overturn the laws and risk being called "activist."

I disagree. It is difficult to overstate the importance of subjecting the legislation against gays and lesbians to the rules governing litigation in the federal courts. Even under the "switch in time" deal, legislation must still be rational and not arbitrary. Litigating over laws like California's Proposition 8 forces its defenders to make a case that will stand up to ordinary standards of rationality, instead of just putting up scary TV ads and going home.

And the whole process of defending the law is subject to the rules of evidence that govern any tribunal in the Anglo-American legal system, rules that require witnesses to have some expertise in the subjects they are addressing, and to hold views that are consistent with one another. Regardless of the outcome of the decision in a conservative-dominated Supreme Court, these challenges to the political campaign against gays and lesbians use the law to expose the irrationality and amateurishness of the arguments behind them. The critics of this approach are simply offering a strategic judgment, not an argument for some concept of judicial review that makes gays and lesbians wrong on the merits.

E. J. Dionne is probably too clever to say explicitly what his jurisprudence means for the many gay and lesbian Americans who aspire to get married or to serve their country honestly. But last weekend in the New York Times, Jonathan Rauch, a gay man, was bold enough to explore the implications of the new Democratic doctrine of judicial restraint. Rauch actually described himself and his spouse as second-class citizens and then urged the federal courts to ignore their plight out of a concern for "judicial modesty." Shortly thereafter, the Washington Post's Jonathan Capehart chimed in to support the court's respect for the choices of the American people. Anything else might provoke a "firestorm," Rauch said, or (worse) "give the Democrats an additional headache in this year's midterm elections." Capehart worried that a ruling on marriage would trigger an "inferno." Against that prospect, a jurisprudence that tosses the rights of gays to protect healthcare and lose the elitist label is a refreshingly cold calculation, I suppose.

I don't know why the commentators keep coming up with conflagration metaphors. Maybe it was the 4th of July. Indeed, as the poet Robert Frost tells us:

Some say the world will end in fire.

Some say in ice.

From what I've tasted of desire

I hold with those who favor fire.

After sitting in on the presentation of the testimony against same-sex marriage in the California trial, I'd go with the rest of the poem myself:

But if it had to perish twice,

I think I know enough of hate

to say that for destruction ice

Linda Hirshman was one of the lawyers for the plaintiff in the Supreme Court case of Garcia v. SAMTA. She is at work at present on a book on the gay revolution.