Believe it or not, the new law -- as cruel as it is -- represents a step toward assimilation for Hispanics 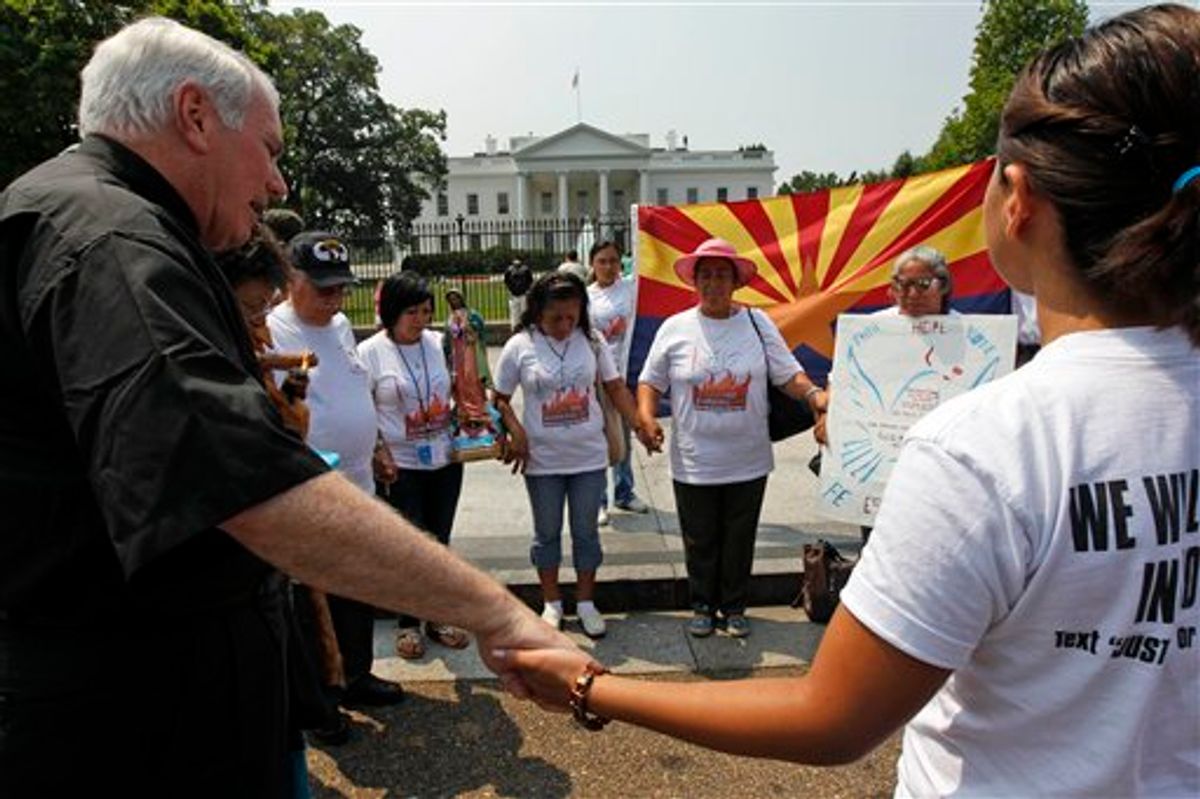 Hispanic community members, some from Phoenix, hold hands in prayer to protest against SB1070, Arizona's immigration law, during a vigil in front of the White House in Washington Wednesday, July 7, 2010.(AP Photo/Alex Brandon) (AP)
--

The apocalyptic language used by opponents of Arizona's new immigration law -- which the Obama administration is now challenging in court -- reflects a conviction that, like apartheid or Jim Crow, it’s an unusually blatant violation of civil rights.

In a way, they are right. The harsh and discriminatory law certainly warrants condemnation. But, in a perverse way, it also reflects progress – an ugly but seemingly necessary step toward assimilation for Hispanics.

To appreciate why, it’s important to understand that the nativism the law embodies has been omnipresent throughout American history. And it’s been directed at such a wide variety of immigrant groups that one can’t help but suspect that it’s an unchangeable part of who we are -- that the process of being assimilated into American culture inculcates every new immigrant group with the tendency to despise the next.

English settlers, for instance, faced armed resistance from Native Americans -- understandably so! -- and only a decade after the Constitution was signed, the Alien and Sedition Acts gave the president power to deport resident aliens. Descendents of English immigrants targeted more recent Catholic arrivals, particularly Irish and German residents, even though members of all three of these groups came over largely as indentured servants (which is to say "guest workers"). Catholic immigrants, as papists, were thought to have suspicious ties to a foreign power, and engaged in suspicious activities like forming their own native-language schools (why can't they just speak American) and living in ethnic enclaves (why do they keep to themselves). Anti-Catholicism justified official and unofficial intolerance, like the draft riots during the Civil War, and resulted in the formation of a political party, the Know-Nothings.

Once Catholics escaped this ghetto, though, Irish settlers out West turned their ire on Chinese immigrants, while Germans targeted Eastern European immigrants for discrimination. Then, once Europeans all became "white people" (a process which took a century and a half for Catholics) they rallied to intern Japanese-Americans during World War II and to keep out Haitians in the 1980s -- and there's the whole weird relationship we have with Mexican immigrants, and good Lord, we haven't even admitted how many Muslim immigrants we have yet, which should just be a hoot once that's an issue.

The whole history of American culture can be seen as a long negotiation about the nature of our national character that becomes more and more expansive as time goes on. Having nativism directed at a particular group is unpleasant for members of that group, but it also signifies that we're in the process of debating whether the group qualifies as "American." And the nice thing about America is that, so far, we've pretty much always decided that if you're living in America, you're American -- which is not a foregone conclusion in most other countries. But unless that debate happens, a group isn't grandfathered in. It's just invisible, as Muslim-Americans currently are.

The suffering caused by the anti-immigrant mood that's swept the country over the last decade must not be minimized. But it must also not be seen as in any way unusual. The same thing has happened time and again: A strange-looking group of immigrants from a foreign country comes to America seeking work, forms its own ethnic enclaves, and is targeted continually by violent bigotry and official intolerance.

What we can't lose sight of is that these groups have all eventually been incorporated into the definition of "American." This doesn't mean that they simply take on an existing identity as their own. Instead, the American identity changes to accommodate the culture the new group brings.

It's an incredibly slow and painful process, and it sure would be nice if we could be less awful about accepting newcomers to our culture. But the Arizona law seems so desperate, and the opposition to it so strong, that we're closer than ever to changing American culture enough that it becomes indistinguishable from Latino culture. It's too much to hope that we'll never not hate Mexican-Americans; after all, we pretty much hate everyone. But if we loudly object to every incursion of nativism, we may be able to experience anti-Latino slurs not as a bulwark against foreign incursion, but as just another entry in the panoply of prejudices and bigotry we harbor toward our fellow Americans.

We'll know we've won this round the fight against xenophobia not when we don't hate Mexican-Americans, but when we hate them exactly much as we hate everyone else in this awful, wonderful country of ours -- a country where, if you stick around long enough, you can be American enough to accuse someone else of being un-American.