Climatologists exonerated, by all except the conservative media, that is 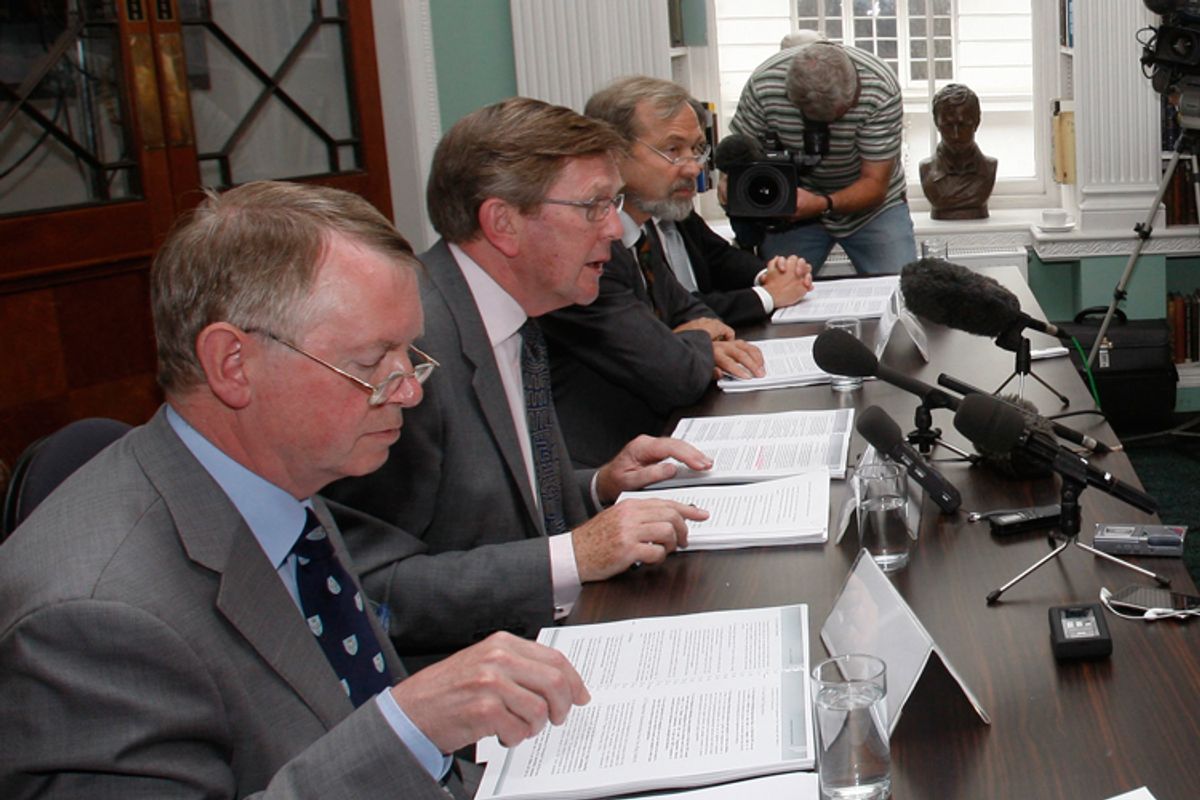 The review group looking into the "Climategate" scandal at the University of East Anglia's Climatic Research Unit.
--

You believe that reality is something objective, external, existing in its own right. ... But I tell you, Winston, that reality is not external. Reality exists in the human mind, and nowhere else. Not in the individual mind, which can make mistakes, only in the mind of the Party. ... Whatever the Party holds to be truth is truth. -- George Orwell, 1984

What with the Northeast sweating out a triple-digit heat wave, naive observers might expect a spate of global-warming stories in the media. You know, retreating Arctic sea ice, vanishing glaciers, etc. After all, last winter's record Washington, D.C., snowstorms triggered a veritable avalanche (sorry) of pundits and TV talking heads prating about the "elitist" idea that rising world temperatures constitute a grave threat to humanity and the natural world as we know it. No less an authority than Fox News' Sean Hannity announced that "climate change is a hoax."

Supposedly, see, there's this global cabal of scientists conspiring to bring about socialist one-world government. But what really got the ball rolling wasn't the weather, but a manufactured, media-driven scandal. The orchestrated release of more than 1,000 e-mails hacked from computers at the U.K.'s University of East Anglia's climate research center quickly became a cause célèbre.

Cherry-picked and quoted out of context, almost 20 years of informal, occasionally bitchy communications among scientists were cited as evidence of fraud. Nor were Hannity and Fox News the only ones pushing the alleged wrongdoing. CNN, NBC, CBS and ABC News, everybody joined the party. "NBC Nightly News" host Brian Williams was typical:

"Climategate they're calling it," he reported on Dec. 4, 2009. "A new scandal over global warming and it's burning up the Internet. Have the books been cooked on climate change?"

Pundits spoke glibly of "fudging the numbers," "massaging the data," and like phrases making climate researchers look as crooked as Wall Street accountants. Even that well-known philosopher of science Sarah Palin contributed a Washington Post column charging that the "e-mails reveal that leading climate 'experts' deliberately destroyed records, manipulated data to 'hide the decline' in global temperatures, and tried to silence their critics by preventing them from publishing in peer-reviewed journals."

If anything, the British press was even more censorious. But were any of these allegations true? Concerning the most widely cited example, a 1999 e-mail from professor Phil Jones to his American colleague Michael Mann of Penn State, charges of wrongdoing appeared nonsensical on their face.

"I've just completed Mike's Nature trick of adding in the real temps to each series for the last 20 years," Jones had written, "to hide the decline." But what decline? By all measures, 1998 was the warmest year in recorded history. Indeed, global-warming deniers sometimes argue erroneously that the Earth's been cooling ever since. In climatological terms, this is like saying that if April 7 is warmer than April 15, there will be no summer. In any event, 2009 now stands as the second-warmest year, and 2000 through 2009 as the warmest decade.

Writing in the Sunday Times of London, professor Andrew Watson explained: "Jones is talking about a line on a graph for the cover of a World Meteorological Organization report, published in 2000, which shows the results of different attempts to reconstruct temperature over the past 1,000 years."

Because inferential data derived from studying tree rings has diverged from thermometer temperatures since about 1960 (for reasons widely debated in scientific literature), adding "real temps" gives a more accurate picture. Nobody was being fooled. Even so, professor Jones resigned as director of East Anglia University's Climatic Research Unit pending an investigation. Last April, an official British government inquiry cleared him and his colleagues.

According to Lord Ernest Oxburgh, who led the investigation, the probe uncovered "absolutely no evidence of any impropriety whatsoever." He added that "whatever was said in the e-mails, the basic science seems to have been done fairly and properly." Then last week, a blue ribbon panel of science faculty at Penn State University unanimously exonerated professor Michael Mann himself. Investigators found "no substance" to charges made against the climatologist by his media detractors. Exactly as the embattled climatologist had said, his e-mail communications had been "misrepresented ... (and) completely twisted to imply the opposite of what was actually being said."

To date, none of the pundits or anchor-creatures who made such a fuss last winter has been heard from. One Myron Ebell, flak for the Competitive Enterprise Institute, a Washington propaganda shop funded by tobacco, oil and coal interests, denounced the result as a "whitewash." Who could have expected anything else? To an operative like Ebell, whose scientific credentials are as nonexistent as those of Hannity, Palin and Brian Williams, intellectual integrity doesn't exist.

Facts are infinitely malleable in service of ideology. People who call this "conservatism" are mistaken. It's an updated version of what Orwell feared: a dogma-driven, obscurantist attack upon reason.