How to choose (and store) a watermelon

Forget hocus-pocus like tapping. Here's how to select and store, with a surprise tip from a pro on how to serve 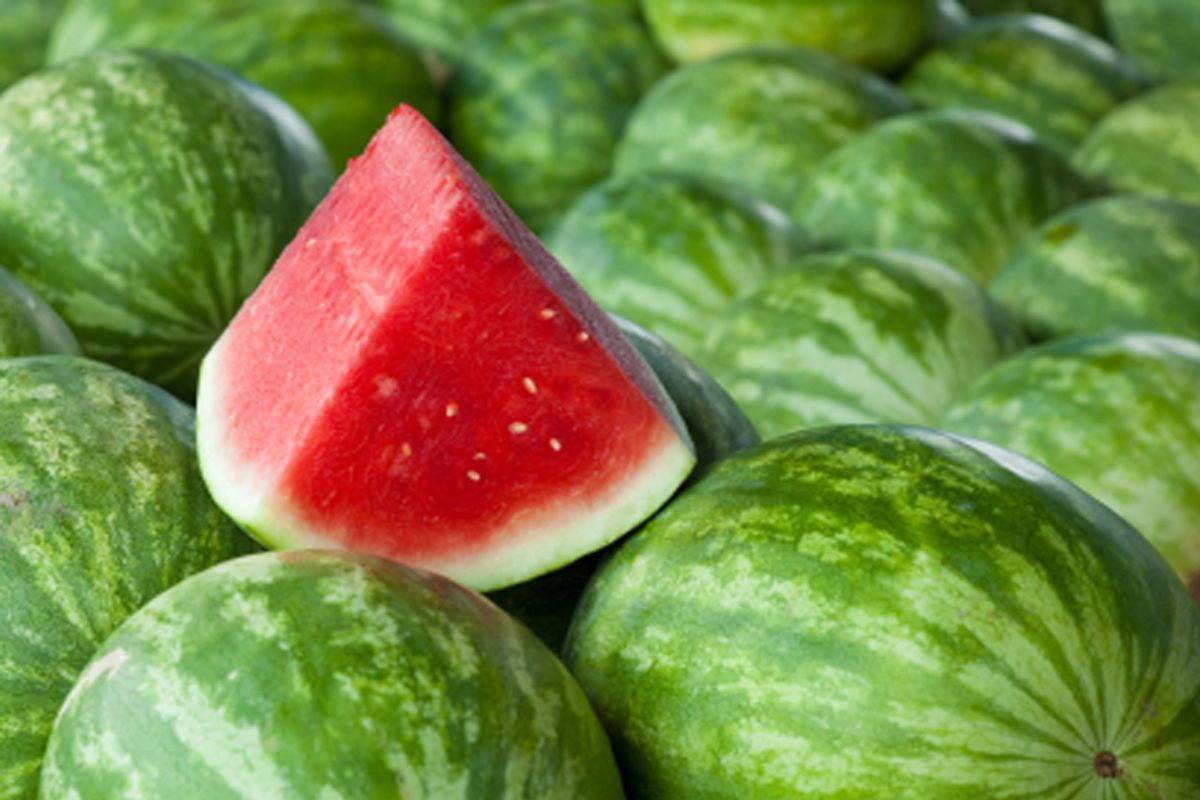 What's more carefree than watermelon in the summer? Eating a wedge so big you can't see out the side, splashing yourself with juice ... Well, if you're standing outside in 103-degree heat, hoping to buy a watermelon good enough to justify living in whatever hell you do that gets this hot, things suddenly become a lot less carefree. Stakes is high for this watermelon, son!

So, yesterday, when it was in fact 103 degrees in the g*****mned shade, I stood in front of the swimming pool-size bin of watermelons at my supermarket watching people go through their selection rituals. One man insisted that he could tap-and-listen his way to juiciness and, as if to impress the pretty woman next to him, proceeded to refine his technique until it looked like he had to do nothing more than touch the fruit, like a spiritual laying on of hands. It seemed a bit silly, all this hocus-pocus, but I understand the need for belief: What's sadder than cutting into a mealy, bland watermelon?

I took my chances on a 15-pound baby and carried it home on my shoulder. Then, this morning, unwilling to ever leave such a decision to fate again, I called an expert -- Darryl Mosher, a farmer and professor of product knowledge at the Culinary Institute of America, who happens to have grown a watermelon or several thousand. When picking one for himself, this is what Darryl looks for.

Shape: You want a symmetrical shape. If the watermelon is narrower on one end or misshapen, it means it grew in fits and starts, and was probably water-starved at one point. I don't even really know what it means for a melon to be water-starved, but it sounds a little too Gitmo for comfort.

Color and spotting: Color itself isn't a great indicator (some heirloom varieties are particularly gorgeous, and aren't even green). But look for melons with a bright skin; dullness may indicate that it's been sitting around. More important, look for the "field spot," a large-ish splotch of creamy-to-yellow or even orange color. This indicates that the melon was allowed to sit in the field for a good long time, maturing and producing sugar. Avoid melons where the field spot is white, pale green or nonexistent.

Pick it up!: One of the best tests requires a bit of effort -- you want to choose one that is heavy for its size, indicating that it's full of juice. If you don't know how much a watermelon should weigh, pick up a few that are the same size in the bin. Keep the heaviest one.

Red or yellow? Seeded or seedless?: As a man of prejudices, I spit watermelon seeds at seedless watermelons and look at yellow watermelons with a jaundiced eye. But Darryl doesn't think these things matter very much in terms of quality. Until recently he would have preferred seeded over seedless, but new seedless varieties can be plenty delicious. And of course there are wonderful heirloom varieties, but to learn about those you should ask the market or grower directly.

Storage and shelf-life: Watermelons can seem to last for weeks in the fridge, but Darryl recommends you keep them just a bit cooler than room temperature, eat them as soon as possible, and refrigerate them only after they're cut, or only for a few hours before serving if you want to serve them cold. The cold fridge degrades their flavor and texture (even as it keeps them from rot), characteristics that already start to deteriorate the moment they're picked. "Any grower will tell you that the very best watermelon is the one that you break while harvesting and end up eating," Darryl says. So buying local watermelons is ideal if it means they get to your market from the field more quickly.

Serving it ... warm and salty?: Most people, me included, like to refrigerate their watermelons because they're so refreshing cold. So Darryl stunned me when he said, "You know, I like my watermelon heated. I put it out on the blacktop, in the full sun, and cut it hot." It allows its true flavors to come out, he says. "It's like a totally different fruit, aromatic, more along the lines of some tropical fruits. They get almost a mango flavor."

While we're on that subject of odd serving suggestions I am actually fond of lightly salting watermelon for a taste contrast, and just last night, my ladyfriend made a refreshing salad of watermelon, cucumber and Greek tzatziki.

A final word of warning: All the above said, choosing a good watermelon does involve a fair deal of hoping for the best. You can't sniff them very successfully because their skins are so thick, tests like tapping for sound are inconsistent, and the single biggest factor in quality is how long the fruit has stayed in storage, something you can't really tell until tasting it. But if you can trust your market and go through the above steps, you're well on your way to burying your face in sweet fruit.