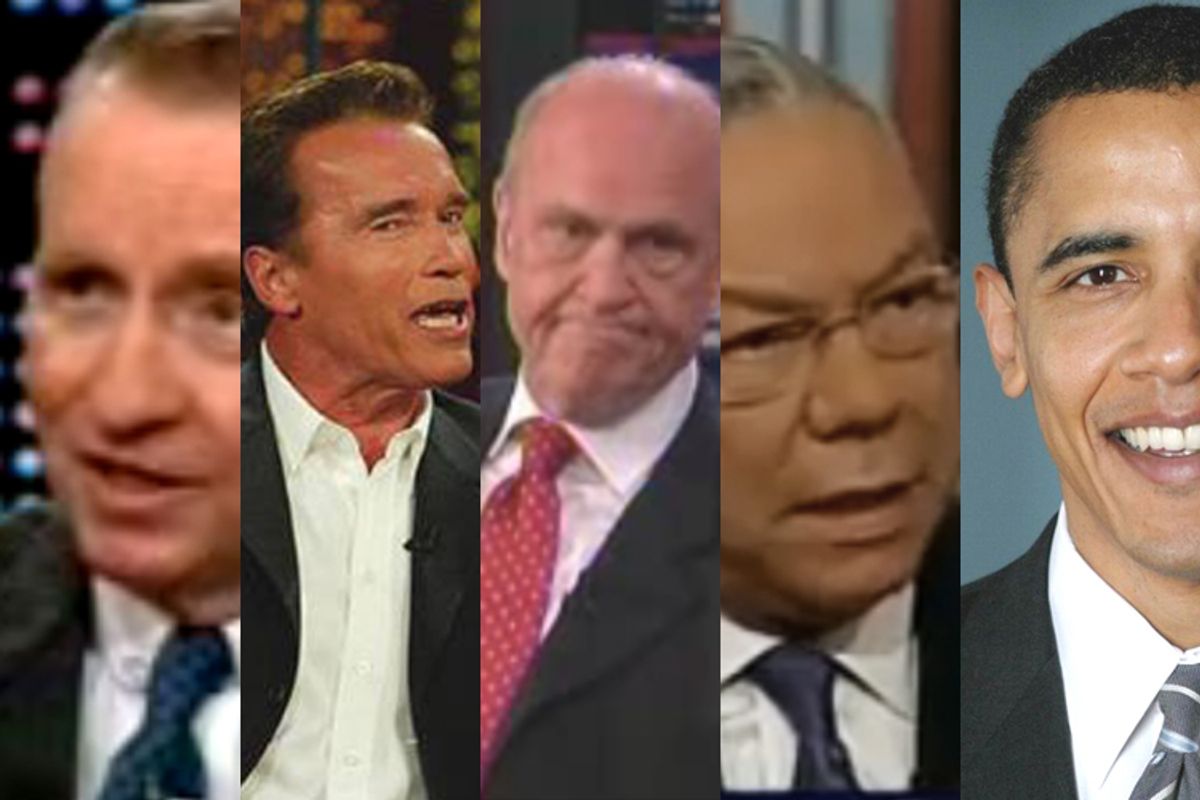 LeBron James has made ESPN very happy. The NBA superstar's decision to announce his free agency decision in a live special tonight at 9 guarantees the cable channel huge ratings on an otherwise dead midsummer night.

This is the first time a free agency announcement in sports has been handled this way, but this kind of partnership -- between a celebrity with a big announcement to make and a media outlet hungry for ratings and prestige -- isn't unheard of in politics. Here are five examples of LeBron moments from the world of politics:

1. Ross Perot/"Larry King Live"/Sept. 29, 1992: Perot's Feb. 20 appearance on King's CNN show -- when the Texas billionaire, seemingly out of the blue, said that he'd be willing to run for president if volunteers put his name on the ballot -- is the one that history remembers. But that decree was (or seemed) spontaneous. There was no anticipation before his appearance.

But Perot's Sept. 29 sit-down was different. Ten weeks earlier, he had abruptly quit the presidential race, fed up with the media's scrutiny of his business affairs and private life. But he made sure his name stayed on the ballot in all 50 states, feeding speculation that he'd ultimately reenter the race. As September wore on, Perot called a meeting of his volunteers in Dallas and invited representatives from the Bush and Clinton campaigns. The major party delegations would make presentations to the Perot volunteers, who would then decide whether Perot would get back in the race. Perot also announced that he'd reserve all comment about the proceedings until a live appearance on King's show that night.

In the end, Perot mainly teased King and his audience. With hundreds of Perot supporters seated in the convention hall where the interview was filmed, Perot asked the crowd to applaud if they were satisfied with either the Clinton or Bush pitches. Shockingly, there was silence. Then King asked them if they wanted Perot to run. A wild demonstration broke out. All Perot would say, though, was that he would make a formal announcement at a later date. (He also promoted a 1-800 number that would allow supporters from around the country to express their opinions.) The gimmick delivered King what at the time were his best non-Gulf War ratings since the 1985 launch of his show. (And Perot officially jumped back into the race two days later, at a press conference.)

2. Arnold Schwarzenegger/"The Tonight Show"/Aug. 6, 2003: As the filing deadline neared for California's gubernatorial recall election, the word was that Arnold Schwarzenegger would not be running (and that, instead, Republicans would rally around former Los Angeles Mayor Richard Riordan).

But then the action movie hero made a long-scheduled appearance on Jay Leno's "Tonight Show," where he was supposed to promote the release of "Terminator 3." Instead, Arnold gave the political world a surprise: "I came to the conclusion that even though there are great sacrifices to make, I felt in the end it is my duty to jump in the race. I'm the most unique candidate because I'm an outsider."

Schwarzenegger went on to win the October recall election in a rout, and Leno ended up emceeing his victory night celebration. (In response, late night rival David Letterman quickly booked the ousted Gray Davis to read a "Top Ten" list of tips for the new governor. No. 6: "To improve your approval ratings, go on Leno. When you get kicked out, go on Letterman."

3. Fred Thompson/"The Tonight Show"/Sept. 5, 2007: The race for the 2008 GOP presidential nomination was, we kept hearing, wide open, with none of the announced candidates meeting all of the party's litmus tests. And so throughout the summer of 2007, there was a movement to recruit Fred Thompson, the former senator and sometime actor, into the contest. Why? It wasn't exactly clear, except that he wasn't as immediately offensive to particular components of the party base as the announced candidates were.

After hemming and hawing for months, Thompson decided to take a page from another actor and reveal his intentions  on Leno's couch. There wasn't much suspense, but when Leno asked him if he was getting "wrinkly" from testing the waters for so long, Thompson replied, "We’re where we need to be right now, and that’s one of the things I need to talk to you about. I’m running for president of the United States." Overall, the appearance was most notable for Thompson's lack of vigor, something that would haunt his campaign, which slowly but steadily collapsed in the weeks and months ahead.

4. Colin Powell/"Meet the Press"/Oct. 19, 2008: For months, the former Joint Chiefs chairman teased the possibility that he'd endorse Barack Obama's presidential campaign, and he promised to reveal his intentions on "MTP."

It was hardly a secret at that point that Powell, who had joined the Republican Party in 1995 after pondering a 1996 presidential bid, wasn't comfortable with the direction of the GOP -- or with the legacy of the Bush 43 administration, in which he'd served as secretary of state for four years.

Still, his much-hyped appearance on "Meet the Press" came at a very consequential time. Obama had led John McCain throughout the fall and seemed poised for victory. But would voters pull back at the last minute over the fear the GOP was stoking about Obama's experience and judgment? It was in that environment that Powell sat down with Tom Brokaw (the interim host after the death of Tim Russert) and offered an unusually long, detailed and uninterrupted monologue in which he laid out his considerations and -- ultimately -- offered a ringing endorsement of the Democratic nominee.

Excerpts from Powell's announcement, played over and over on the news, were surely helpful to Obama. So was Rush Limbaugh's hysterical reaction: "Secretary Powell says his endorsement is not about race. OK, fine. I am now researching his past endorsements to see if I can find all the inexperienced, very liberal, white candidates he has endorsed. I'll let you know what I come up with."

5. Barack Obama/Your phone/Aug. 23-24, 2008: Obama sought to create a different kind of hype for the announcement of his running-mate choice in 2008. Instead of holding a rally or press conference or spilling the beans to one lucky TV host, his campaign promised supporters that, if they'd just provide their cellphone numbers to the campaign, they'd be the first to know Obama's choice, via text message.

For a while on the Friday before the Democratic convention, it seemed like they might be serious -- that the big media outlets would be getting the news at the exact same time as everyone else. All day, speculation swirled. It was Evan Bayh. No, wait -- Kathleen Sebelius. Or Chet Edwards. And on and on. But by that night, word began to leak to the usual media suspects: It was Joe Biden. They reported it first. And then, about five hours later -- at 3 in the morning -- the text messages went out. So much for that.