The man behind the star's Linda Lovelace film talks about why her jail sentence wasn't justice. It was vengeance 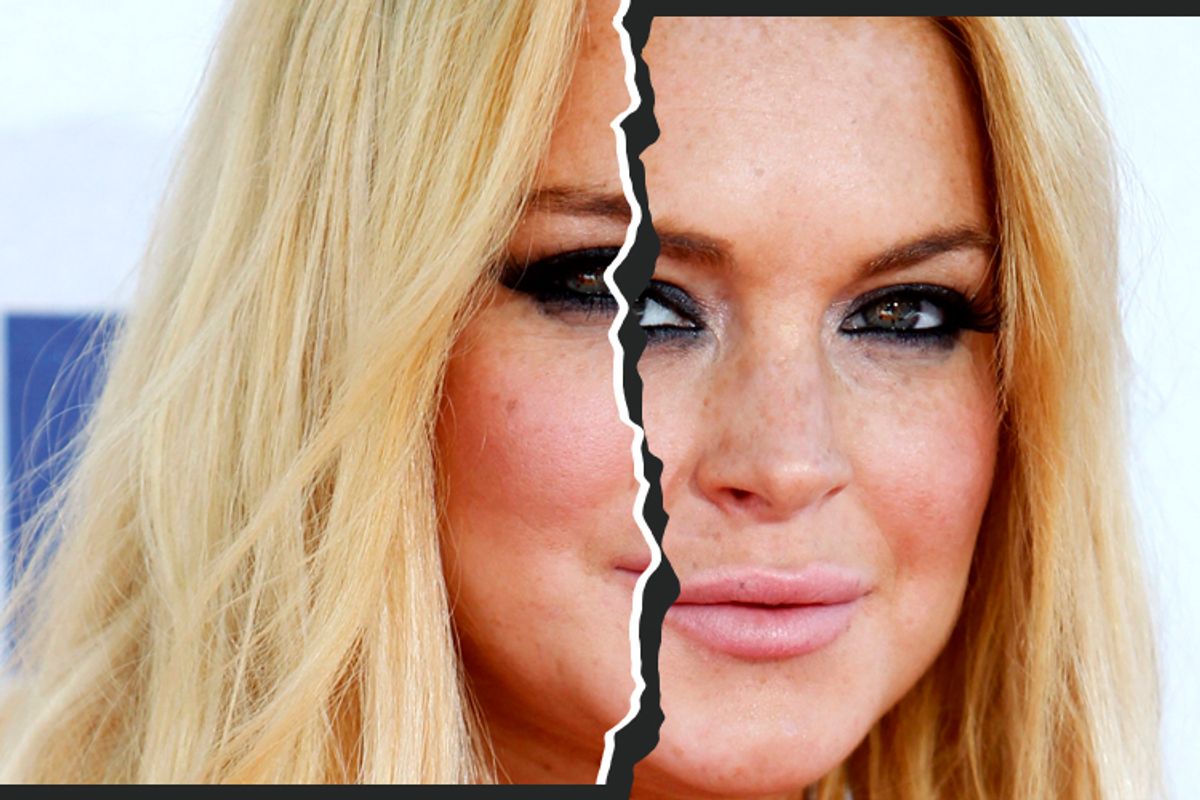 On Tuesday, Lindsay Lohan was sentenced to 90 days in jail. The offense: violating terms of probation handed down after a 2007 arrest for drunk driving. Beverly Hills Judge Marsha N. Revel was specifically reacting to the singer-actress' failure to show up for court-ordered alcohol education classes. But in handing down the sentence, Revel also characterized it as punishment for a larger pattern of behavior related to Lohan's substance abuse, including a second 2007 arrest for drunk driving and many incidents in which Lohan appeared to get caught breaking the law or violating the terms of her probation, then lying to escape punishment.

Public reaction has been divided. Some have hailed the sentence as tough but justified (although tradition suggests that Lohan probably won't serve the entire sentence). Others have cited it as an example of the so-called celebrity tax -- a judge punishing a celebrity more harshly than she would an anonymous citizen, to make an example of the celebrity and perhaps grab headlines of her own.

Although Wilder is anything but a detached observer, I was intrigued by the intensity of his comments. When I realized last night that I was a couple of degrees removed from the filmmaker -- we have a couple of friends in common -- I got in touch with him and asked him if he'd be willing to talk about the case and elaborate on some of his complaints. A transcript of our conversation follows.

Can you describe the range of reactions you experienced when you heard that Lindsay Lohan had been sentenced?

The range? Just shock, I guess. Shock that a judge would give three times what the D.A. asked for. When that happened to Paris Hilton it seemed transparently to be sort of gimmicky and attention grabbing on the judge's part. I was shocked that someone would pull that again.

So you found the sentence surprising?

Do you think there was a message being sent, beyond "Don't break the law, kids, because even if you're famous, you'll go to jail"?

I think being a judge and grinding through DUI cases and the like is pretty unglamorous, and if someone has the chance to grab the limelight, they're likely to take it. What are the cash and prizes like? I don't know. I'm not sure they know. But I know they are certain that it's superior to their previous life of anonymity.

To call your reaction cynical would be an understatement. You're probably aware that all over the world right now -- and you can see evidence in comments threads of news articles about your leading lady -- people are countering your type of reaction by saying, "Maybe if you'd lost a loved one to a drunk driver, you might feel differently." How would you defend your take on the sentence to somebody who came at you with that argument?

The sentence was not about that. Lindsay hasn't driven a car in years. It was about attending a class. And I think it's pretty clear to most people I talk to that the sentence was based on the tabloid perception of Lindsay and not on the record. The people in her program were not calling for her to be lynched. Nobody was, except certain members of the "press."

The thing that I think is important for people to understand here -- because I think it has implications that reach beyond this one story -- is that all the bile spewed in the press here, and indeed the sentence itself, are based on a cooked-up narrative, one that bears no more or less relationship to reality than that of a reality TV show.

It sounds like you're saying it wasn't Lindsay Lohan that was sentenced, but her image.

There is a weird "meta" thing with our movie that is morphing into the real world. Lindsay, like Linda Lovelace, is a screen onto which people project their fantasies, anxieties and rages. And as with Linda, that can mean that person gets cookies and cake, or it can mean that person is subject to public shame and abuse.

If Lindsay Lohan is a screen on which people project their fantasies, what are those fantasies, and where do they come from?

I think people idealize ... and when someone doesn't fit their fantasy, they are enraged. And the system, the entertainment press, is enraged too. And so a narrative is formed and that person is demonized.

There are all these people out here whom the folks at home think are saints and walk on water. And you know as well as I that that couldn't be further from the truth. It's quite arbitrary who gets a halo and who gets horns. And in this case, I think the press wanted a tale of repentance, of humility, and they didn't get it.

That's putting it mildly. A story in the Contra Costa Times says, "Photographers with zoom lenses revealed an expletive written on her left middle fingernail, an expletive associated with a gesture using that finger. So not only was Lohan less than contrite, she's also redundant. However close this latest revelation brings Judge Revel to apoplexy, protest-by-manicure apparently does not constitute contempt of court." Did you know about that? What do you think about it? Her criminal defense attorney Trent Copeland told the press, "There's no legal ramifications from this. She has a First Amendment right to wear anything she wants. But it's just not the brightest thing in the world to go into court like that."

I mention that because it goes to your point about her not displaying repentance and humility. And it sounds like you don't think she should express those qualities, that in fact her attitude toward the press is justified. Am I wrong?

All I'm saying is, the entertainment press wants the repentant story: I bought a house, here's my boyfriend, here's my dog, here's my yoga class, see, I'm nice, now. And when they didn't get that, they went into Annihilation Mode.

What's the logic, if you can call it that, by which the press decides which subjects to mark as bad seeds? Are women held to a different standard than men?

Sure. We all know of certain guys who act out in certain ways and are winked at as "Peck's Bad Boys" or "hard-drinkin' tough guys." Guys who do, in fact, quite frightening things. They get a pass. Girls don't.

What about the argument that she's a public figure, and the press's ability to say or show almost anything they want in relation to public figures, no matter how harsh or unfair, is constitutionally protected, and that if she can't handle it, she shouldn't have gone into the entertainment business?

Well, we're not discussing what's illegal. I think it's more about the crumbling of something very basic and humane. I encounter people all the time -- people in real life, fancy people with money -- who say, "Oh, are you the guy doing that movie with Lindsay Lohan? God, I can't stand her. I wish she'd drop dead." What? Who ginned that up? Where do people feel that ease in saying that? And why, precisely, are people barking for her extinction instead of putting Tony Hayward or Lloyd Blankfein in their imaginary electric chair?

Hasn't it always been this way, though? People have always had low opinions of certain people based on what they read or heard in the media. There was never a time when the tabloid press was acclaimed for its sensitivity and sound moral judgment. What's different now? And if there is a difference, is it one of kind, or degree?

This seems to me a new and depressing iteration. What's unique is the Fox News-style, 24/7 concussion approach. The tabs have been ramping up for months, prepping for this moment as if for the apocalypse. And now there are [career] obituaries. "The fall of a once-promising star." Excuse me? This woman is 24 years old. I have lots of friends who are actors who are older who haven't gotten their toe in the door. You're going to write someone off who has this much ahead of her? To be sure, there has been an eat-and-dispose mechanism at place before, but never at this level of violence or speed.

Have you talked to her about all this? And if so, what's her take on it?

I have, and I want to keep that off the record. Very off. Like not even "no comment" off.

Do you think the constant media scrutiny has affected her ability to focus on her career or her personal decisions?

I think you would have to ask her that. But this is what I wanted to say. As painful as this moment is, and as much ugliness as it reveals -- check out the comments on the articles if you want to see your opinion of human nature plummet -- there is one ray of light here. One thing I can say with categorical certainty is that when these unfortunate shenanigans are over, Lindsay will soar like the phoenix. Her accomplishment will be extraordinary. She will be recognized as among the very strongest and best. And in a short time, all this will fade in memory and people will wonder, What was all that about? Why was everyone so angry at this person that we adore? And I will have the good taste not to say I told you so.