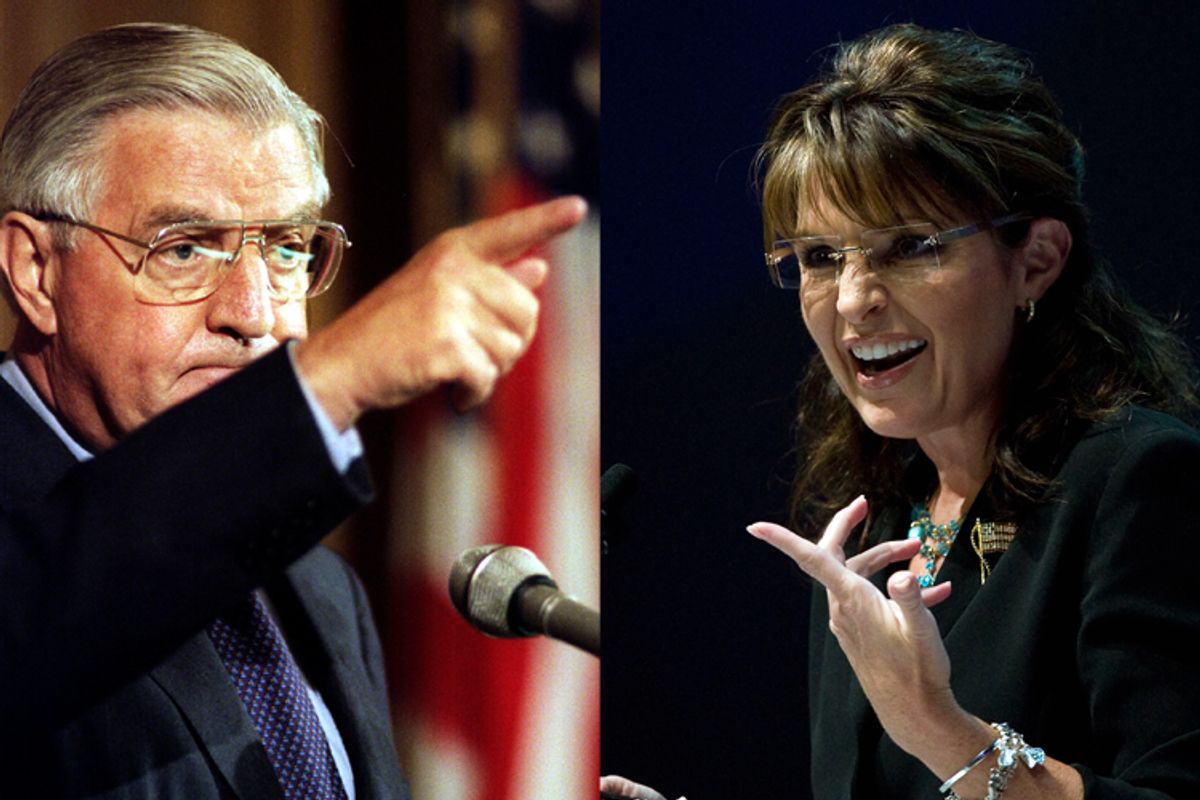 Jonathan Bernstein has a post up responding to my comparison of Sarah Palin '12 to Walter Mondale '84. He agrees that nominating her would be an unmitigated catastrophe for the GOP, but:

Kornacki's jump from there to Walter Mondale in 1984, however, doesn't really work. Yes, Mondale got clobbered -- but he was clobbered by a popular incumbent president boosted by a strong economy. Under those circumstances, it didn't really matter who the Dems ran; when the electorate is happy with the incumbent, there's not very much the out-party can do about it.

He goes on to write that Mondale was "a perfectly fine candidate in a year in which Democrats had no chance."

I don't disagree that '84 was a completely unwinnable election for the Democrats and that the reason was the economy and Reagan's personal popularity. This is the reason I've been making so many comparisons between Obama's '12 prospects and the Reagan re-election campaign. Obama won't be able to match Reagan's 49-state landslide (it's just not possible for a Democrat now), but if the economy rebounds in the next two years, voters will be eager to reward him -- particularly so because of their personal affection for him. Under those conditions, it won't matter if the GOP nominates Palin, Romney, Huckabee or anyone else: They will lose.

My point in invoking Mondale wasn't that the Democrats of '84 blew a chance at victory by nominating him. It was to explain the psychology that encouraged the party to field a candidate destined not just to lose, but to be eviscerated in a humiliating landslide. Remember: Without winning Minnesota, his home state, by a scant 3,761-vote margin, Mondale would have been the first and only major party nominee to lose all 50 states.

Bernstein suggests that Gary Hart, the main alternative to Mondale in the Democratic primaries, wouldn't really have fared any differently. I disagree. No, Hart wouldn't have won. And no, Hart wouldn't have made it a nail-biter. But he would have done better. There are two reasons for this.

One is that Mondale was an unusually objectionable presidential nominee. To the Democratic base, he may have been a "perfectly fine" candidate, but not to swing voters. Mondale's unfavorable scores with all voters -- and with independent voters in particular -- were alarmingly high. There were many reasons for this, but the simplest is that he reeked of Washington insiderdom and of the administration that voters had angrily tossed out four years earlier. His intimate and well-publicized ties to organized labor leaders, who had helped deliver him the nomination, didn't help, either.

When, after a decent debate showing against a very wobbly Reagan, Mondale's favorable score momentarily outpaced his unfavorable in polling, his campaign considered it a minor miracle.

Yes, as the economy improved in 1983 and 1984, Reagan's victory became a foregone conclusion. But Mondale made for a ridiculously easy mark for the GOP -- the embodiment of everything voters had revolted against in 1980.

The other reason is Hart himself, whose biggest strength came with the swing voters who most disliked Mondale. A July 1 poll (Hart was still hoping to steal the nomination from Mondale at the San Francisco convention) found Mondale trailing Reagan by 19 points. The gap for Hart was 12. The reason: Hart fared 10 points better with independents, 12 points better with voters under 30, and 10 points better among voters in Western states. Mondale's main strength over Hart came among the core constituency groups of the Democratic base.

Hart would have run more than one point better against Reagan than Mondale, I believe, because he would have won over some swing voters who were adamantly against Mondale without losing the Democratic base (which Mondale himself didn't even do a great job of holding). Hart would have won some states and kept the margin closer to ten points -- especially after Reagan's troubling first debate performance stirred unease about his fitness to serve another four years. He famously calmed those fears with a one-liner about Mondale's "youth and inexperience," but -- again -- this was an easier task because voters were so predisposed to like Reagan (and dislike Mondale). It wouldn't have been quite so simple with Hart as the nominee.

The bigger point I was trying to make is that Democrats were essentially oblivious to all of this in 1982 and 1983. With a recession dragging Reagan's numbers down, they convinced themselves that the Reagan landslide of '80 had been a fluke and that the president was a certain one-termer. There was no introspection and no urgency to change, and Mondale was the result. I see that same kind of thinking at work in today's GOP -- and I see it leading to the same place.

UPDATE: Because I can't leave well enough alone, one final follow-up, to Bernstein's reply to my reply. I actually don't think there's too much disagreement here, but I do want to clarify a sentence that I worded imprecisely:

When, after a decent debate showing against a very wobbly Reagan, Mondale's favorable score momentarily outpaced his unfavorable in polling, his campaign considered it a minor miracle.

Bernstein noted that I seemed to be suggesting Mondale's post-debate bump in popularity came because of Reagan's sloppy performance. I wasn't. Mondale's numbers bumped up because he himself did well in the debate -- he was more likable (or less unlikable) than the caricature that had come to define him. We've seen this kind of bump after presidential debates before: Reagan after his one-on-one with Carter in 1980; Ross Perot after the first debate in '92; and John Kerry after his first encounter with W in '04. Those were all more dramatic examples, but it was the same basic phenomenon with Mondale. That's why his favorable numbers briefly perked up. I included the mention of Reagan's awful performance in that sentence (this was the debate where he seemed to draw a blank) more as a point of reference.

Anyway, as I said, I don't think there's too much disagreement between us. I agree that just about all voters, whether they admit it or not, have made up their minds at the outset of a campaign. But I think there's a little more mushiness, which a candidate like Hart could have exploited in '84 -- but that Mondale absolutely couldn't.