It's pretty much impossible to tell what he actually believes. But that doesn't stop him from putting on a show 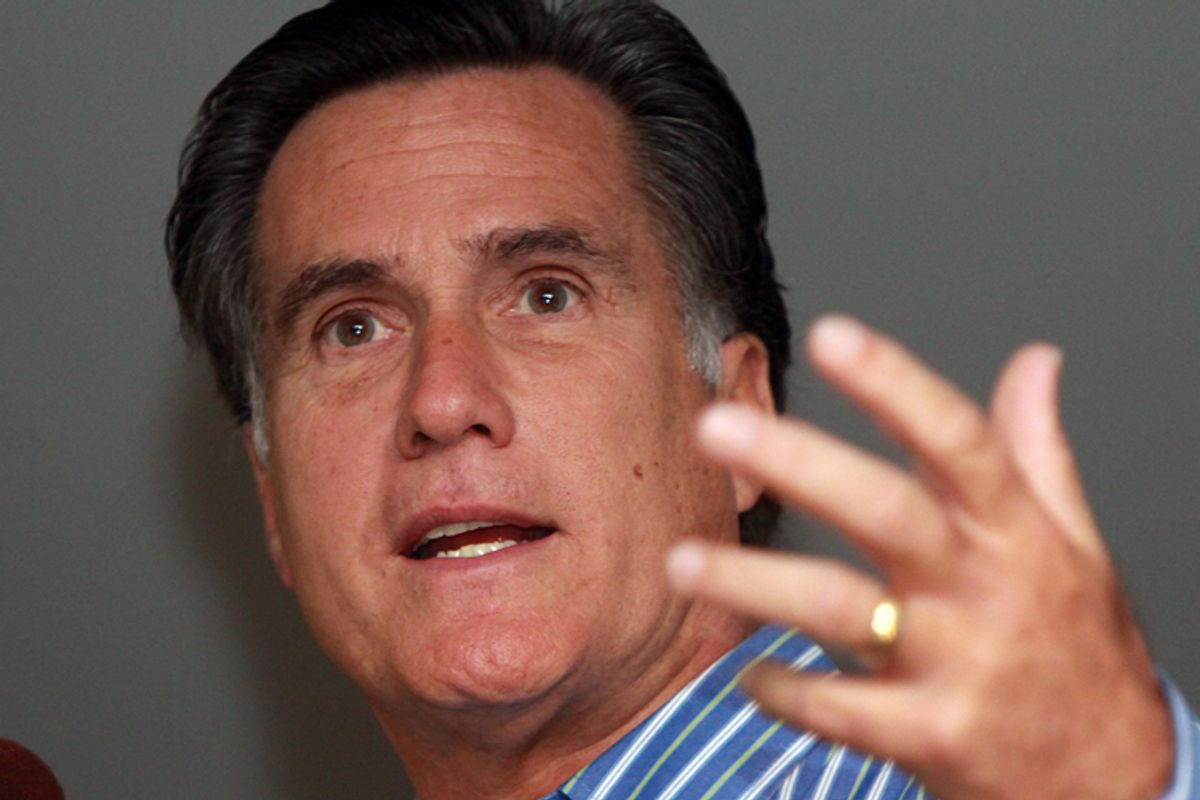 Mitt Romney's decision to use a Tuesday Op-Ed in the Washington Post to blast the new START between the U.S. and Russia has prompted plenty of head-scratching, with numerous commentators dissecting his arguments and finding them thoroughly nonsensical and inflammatory.

From a policy standpoint, their critiques, I'm sure, are entirely valid. I just don't know why they're assuming that Mitt actually believes anything he wrote.

For instance, the Atlantic's Marc Ambinder noted that Romney, based on his Op-Ed, would take America back in "a radical old direction" and that he "subscribes to an essentialist model of the world, where humility is only used as a preamble to assert strength, project strength, be strong."

Well, maybe. Or maybe Mitt is simply doing what he's always done in politics: identify his target audience and pander to it. Right now, his target audience is Republicans who are likely to vote in the 2012 primaries and caucuses, and you simply can't move far enough to the right to appeal to them -- especially if they already have doubts about the purity of your ideological commitment (as they do with Mitt).

Longtime Mitt watchers have probably figured out that there's a correlation between the heat of his rhetoric and his sense of insecurity. The more he senses that his target audience isn't buying his act, the more wild and dramatic his antics become.

I first noticed this back in October 1994, when he was running for the Senate against Ted Kennedy. Romney's target audience then was culturally liberal Massachusetts suburbanites -- the voters who had elected Republican Bill Weld in the 1990 governor's race. Romney knew that if the election was waged on social issues like abortion, gun control and gay rights -- the issues Kennedy wanted to fight on -- he would lose. So he opted to run as a Bill Weld Republican.

And that's when things got fun. As Democrats and the media scrutinized his (very limited) past statements on those issues and Kennedy touted his own credentials on them, Romney sensed his target audience growing uneasy. So he doubled down. At his first debate with Kennedy, he told a tear-jerker story about losing a "close family relative" to a back-alley abortion, and how the moment had convinced him that "we can believe what we want, but we will not force our beliefs on others on that matter. And you will not see me wavering on that." (That moment came back to haunt Romney -- somewhat -- in a memorable YouTube mash-up from early 2007, when he was running for president.)

Of course, Romney did waver on abortion -- the minute his target audience changed. In the summer of 2001, while living in Utah and overseeing the 2002 Olympic organizing effort, he asked a local newspaper to stop referring to him as "pro-choice." The reason was obvious: Mitt was thinking about staying in Utah and running for governor there -- and there was and is no room in the Utah GOP for a pro-choicer. Then, a year later, when he was back in Massachusetts and running for governor there, Romney switched gears and once again declared himself committed to protecting the right to choose. That helped him hold on to the suburbanites and defeat Democrat Shannon O'Brien, but a few years later -- when he decided not to seek a second term as governor and to put all of his efforts into the GOP presidential campaign -- Mitt suddenly morphed into a fire-breathing abortion foe.

Abortion is hardly the only issue he's done this dance on. The one constant with Romney is that he will find a way to take any position that is popular with his target audience. And he'll ratchet up the emotion if he thinks it will help convince that audience. The Mitt Romney who put his name on the comically hawkish START Op-Ed this week is really no different from the Mitt Romney who told Massachusetts voters in 1994 that he would be more supportive of gay rights than Ted Kennedy.

I've long believed that Romney can best be compared to George H.W. Bush, the old Yankee Republican who realized in the early 1980s that winning the 1988 GOP nomination would require a wholesale reinvention of himself as a Reagan disciple. He displayed the same desperation that is so evident in Romney's pandering to the right today. It was George H.W. Bush, for instance, who managed to describe himself with a straight face as a "born-again" Episcopalian. He was never that convincing, but it was enough to get him what he wanted in 1988.

Time will tell if the same tricks will work in 2012.