Dancers, minus Alex Wong, mix things up on "SYTYCD"

A potentially devastating injury sidelines the front-runner, and everyone else tries their best 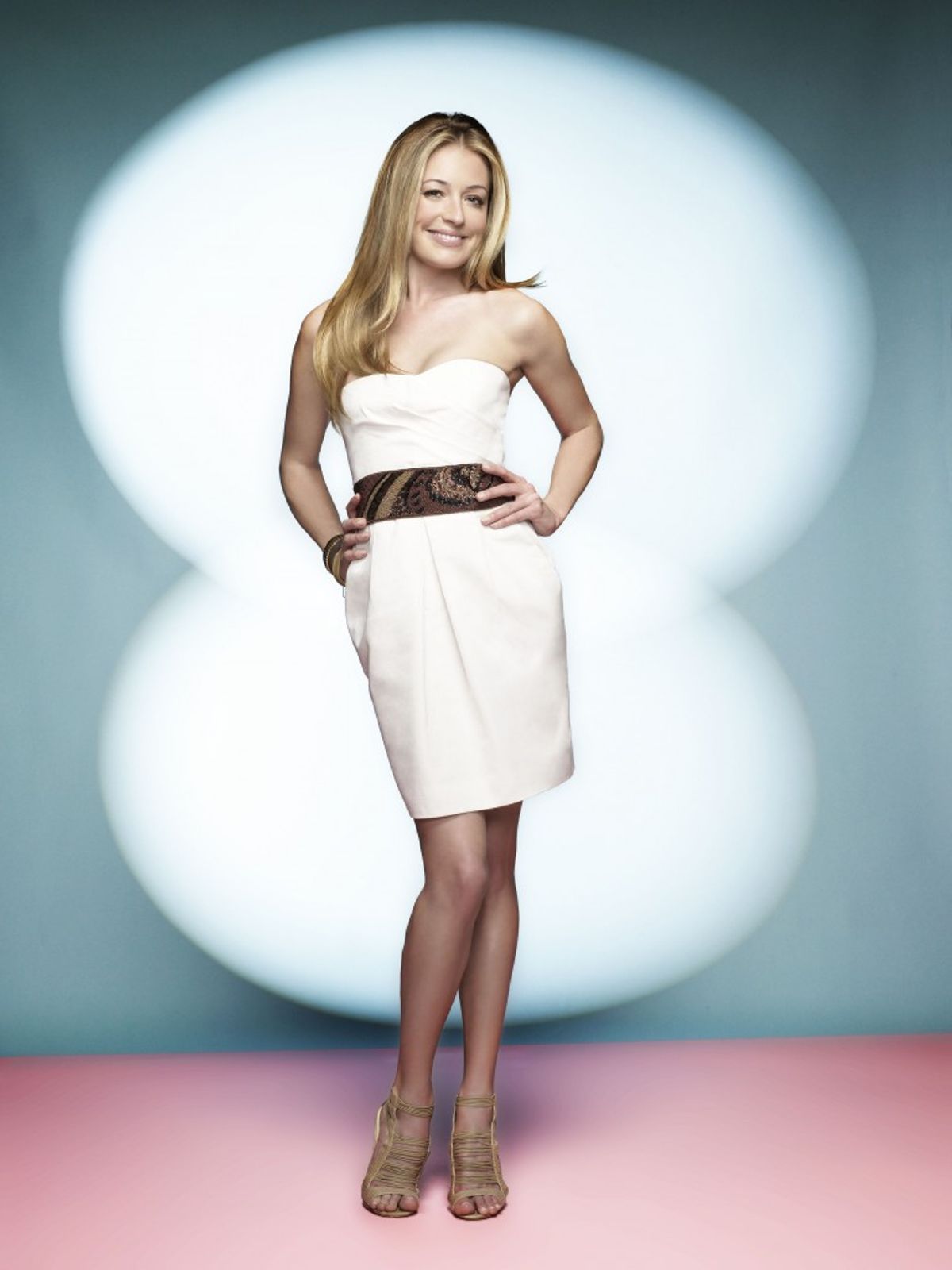 Cat Deeley, host of "So You Think You Can Dance"
--

I was so anticipating Alex Wong's performances Wednesday night after seeing him kill it last week with Twitch -- then my stomach dropped. He wasn't in the show opener, and I know what that means on "So You Think You Can Dance." It means an injury. To hear from Nigel that it might not be just a torn muscle, or a sprain, which dancers of Alex's caliber dance through every day, but that it could be a ruptered Achilles' ... well, I almost stopped watching and called in sick for today. The rules state that if Alex can't perform for two weeks he'll be eliminated, and while it's fair, in this case it would be a f#*king travesty. He's the best dancer on the stage, and I think anyone who wins in his stead will know in his or her soul that the victory is tainted. And that's not fair. Everyone should be crossing their fingers and their toes and their eyes that he can rub some dirt on it and jump back in.

I did watch the rest of the show, though, so let's focus on what we got, right? Everyone was paired with a new All-Star, and for the first time this season (aside from group numbers) they got to dance with each other, too. That switch-up made for the most memorable moment of the night, when Lauren and Kent fell in love on stage with Travis Wall's impeccable contemporary routine to guide the way. Can you believe Wall is only 22 years old? Unreal. He gave two 18-year-olds the opportunity to participate in a dream version of their prom night, a fantasy interpretation of that first bittersweet and profound love that we all (hopefully) experience. And they lived in it. For all Lauren's jokes about tweens being mad at her for dancing with him, she was the pitch-perfect cypher for all of that pent-up pheromonal longing. Their kiss at the end was real, their connection was real. I got goose pimples, then I watched it again.

The only other performance I rewound tonight was Ashley's hip-hop with All-Star Dominic. Their ninja assassin Tabitha and Napoleon piece was 180 degrees from Lauren and Kent's wistful romanticism, in the best possible way. The choreographers may have seemed concerned about the contemporary dancer's ability to sully her sweet demeanor, but I'm from the same part of California as Ashley (the San Joaquin Valley, between Stockton and Bakersfield) -- no way that girl can't give a good booty pop. That's how we do. She had the outer swagger, she had the precise and hard technique, and while Mia thought she didn't have "kill" in her eyes, I thought every component was right on. And I hardly noticed that I couldn't see those gams.

Let's do the rest of the night list-style, because we can.

Adechike: He could be in trouble. Yes, his mojo was off with Alex having to bow out of their Bollywood routine, and last minute adjustments were probably hard to reconcile. The split jumps that injured Mr. Wong in rehearsals were lovely when Adechike did them, but it wasn't enough to make up for his lack of crispness and his inability to wipe the thinking off his face. Don't even get me started on the Mandy Moore jazz routine in which he managed to let a set piece out-charm him. The bar did more dancing, and that's not entirely his fault. Mandy! (Imagine a megaphone to my mouth) Give the boys actual steps to execute! They're not actors!

Jose: So, so, so much better this week. Even the derided African jazz piece with Billy was an improvement over previous efforts, although the judges' dislike of him as the hunter led to the first real critique of Jose that I've heard. He's not in danger of going home, so he can take the hit. The b-boy's contemporary with All-Star Lauren was sensual, and even though he looked like every other street dancer doing something more lyrical (which is to say: stiff, a bit lumbering, and overwhelmed) he proved to me that he is improving, not just coasting.

Billy: I've never seen the musical "Cats," and now I don't want to. "Macavity" was a wicked irritating piece of music, despite the devilish fun of Billy's cat burglar Broadway number. I'll just read the original T.S Eliot poem. Choreographer Spencer Leff gave our little imp the perfect ingredients to show the judges why his relative unmanliness shouldn't matter. Billy isn't butch. He'll never be butch. It doesn't really look like he wants to hump his female partners. So what? The intensity and convolution he brought to his "jaguar" role in the African jazz piece with Jose was unmatched in his earlier performances. His androgyny works for him, and I've decided I love it.

Kent: I was a little worried our Boy Wonder wouldn't pull out all the stops this week, and the contemporary with Lauren proved me profoundly wrong. Before that revelation, though, we got a little Kent-as-Timberlake hip-hop with Comfort, and the best I can say is I wasn't appalled. It wasn't Billy krumping. He had a little groove to him, he didn't pull his face, but when he dances with an accomplished and and mature female, I'm sorry, I see "I've never gotten laid" in neon lights over his head. There's a way the pelvis moves once it's seen some battle, and his nether regions look like they're still in JROTC. It's cute, but it's not convincing in the slightest.

Robert: Sigh. The chiseled sweetie-pie had great raw material with the Sean Cheeseman jazz dolls-come-to-life piece, and it started out so well, but when he didn't catch his All-Star (Kathryn) about halfway through it seemed to fall apart. None of the holds were exactly right after that, although they both charged ahead as if he didn't essentially drop her on her ass on live TV. Maybe it wasn't as bad as it appeared, to me -- but at this stage of the competition there are rarely any technical mistakes, so that one might as well have been lit up like a Christmas tree. And to be cursed with the quickstep, too ... Robert might be going home.

Ashley: She got down with her ninja-bad self, showed off her range, and managed to thoroughly impress the judges with both of her performances. Thanks the gods, because I don't want to see either of the remaining girls go home for at least a few more weeks. Ashley managed to take the "dance of death," the dreaded quickstep, and make it totally work for her. She looked beautiful and assured doing ballroom, and so few can pull off the fast pace of that dance with that level of grace. Or maybe she got the praise because every other dancer that attempts furious footwork like that is raked across hot coals while being flogged. Figuratively speaking.

Lauren: She gets better and better every time she dances. She seems to be the one contestant who actively absorbs and implements the notes the judges give her, and she is delightful to watch. Love her. Her body's natural muscle and curve was perfect for her cha cha with Pasha, and her more petite stature meant the vertically-challenged All-Star had no problems partnering her smoothly. Lauren was a sexy, commanding woman in her first routine, and then she turns around and gives us vulnerable yearning with her Kent partnership. Fantastic night for her.

All the other crap: Not only is the Wongmeister down and out, but All-Star Allison suffered a rib injury while dancing with Billy. Get better, lady, because I've been captivated by you all season. Continuing her unflagging brutality from last week, Mia reached new heights of bitchtastic on Wednesday, calling Adechike "mediocre," and "nothing," and telling him "I really miss Alex right now." Pull it back a bit, Michaels. At least Cat spoke up for the beleaguered dancer. If either Kent or Lauren have a significant other, they might want to check their text messages to make sure that's still the case after they danced together. Can someone please, please choreograph some mother-loving turns? I miss the mind-boggling chains of pirouettes. Note to judges: when you find yourself falling down the penis-joke-double-entendre-rabbit-hole, shut up. It stops being funny the moment you draw attention to it. And I still want to make out with Dave Scott (apologies to my husband.)

The judges name-dropped Jerome Robbins when critiquing Billy's Broadway, so I couldn't resist posting video of my favorite "West Side Story" number -- "America," with the delectable Rita Moreno.