In Florida, rejoicing. In Ohio, heartbreak and tears -- then anger 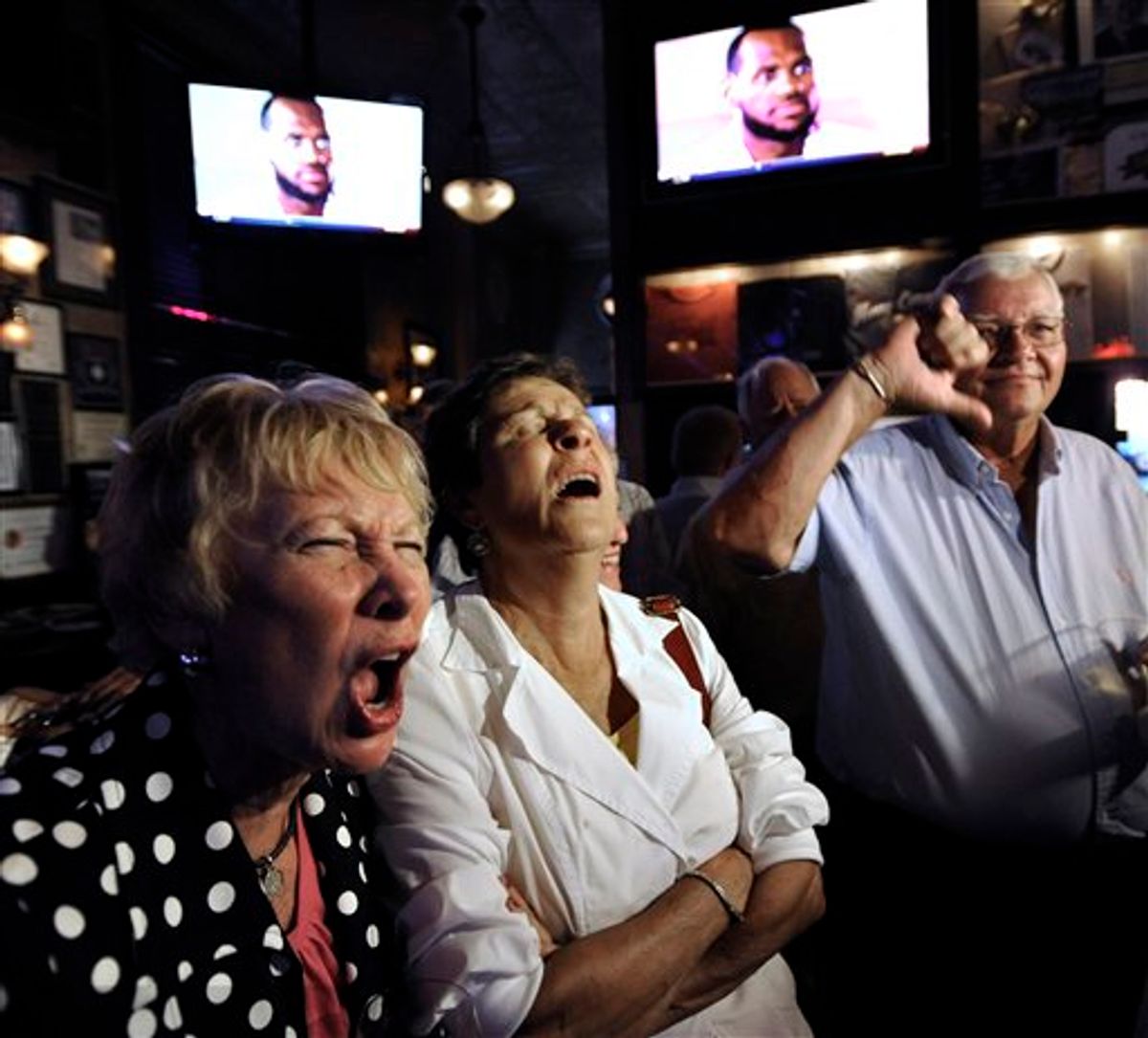 When the months of suspense peaked, LeBron James delivered a few words that rocked the NBA and changed two cities and franchises.

At 9:27 p.m., James, looking nervous and somewhat unsure, finally announced his plans from a small stage in Greenwich, Conn.

"This fall, and it's very tough," James said to a national TV audience. "I'm going to take my talents to South Beach and join the Miami Heat."

In Florida, there was rejoicing.

In Ohio, only heartbreak and tears -- then anger.

The most wanted man in league history decided Thursday night that it was time to leave the comforts of home to chase a championship.

"I can't say it was always in my plans, because I never thought it was possible," James said of this union with the two perennial All-Stars, players he has known for years. "I've looked forward to it. Those are two great players, two of the greatest players that we have in this game today. You add me, and we have a really good team."

Landing James was a huge victory for the team president Pat Riley, who was able to corral the top three stars in an unprecedented free-agent class and now must resist the temptation to leave the front office to coach them.

James' announcement ended weeks of speculation and capped a multi-ringed media circus in this age of social networking that spun out of control. It also concluded a somewhat embarrassing courtship of a player by cities, celebrities and franchises who fawned over the 25-year-old who doesn't have a finals win on his resume.

New York, Chicago, New Jersey, Los Angeles and every other NBA spot came up short, finishing out of the money.

So did Cleveland. As it always does.

This time, losing was tainted with bitterness.

Once James shared his secret, fans poured out of the same downtown bars and restaurants that have thrived during these tough economic times. A few set fire to his No. 23 jersey while others threw rocks at the 10-story-tall billboard featuring James with his head tossed back and arms pointing skyward.

"We Are All Witnesses," the mural says.

This was something Cleveland never thought it would see.

Cavs owner Dan Gilbert was as upset as anyone. He posted an open letter to fans on the team's website ripping James and told The Associated Press he believes James did not play up to his abilities in Cleveland's second-round loss to Boston.

"He quit," Gilbert said in a phone interview. "Not just in Game 5, but in Games 2, 4 and 6. Watch the tape. The Boston series was unlike anything in the history of sports for a superstar. ... People have covered up for him for way too long."

Not Gilbert, not anymore.

"As you now know, our former hero, who grew up in the very region that he deserted this evening, is no longer a Cleveland Cavalier," Gilbert wrote. "This was announced with a several day, narcissistic, self-promotional build-up culminating with a national TV special of his 'decision' unlike anything ever 'witnessed' in the history of sports and probably the history of entertainment. Clearly, this is bitterly disappointing to all of us.

"The self-declared former 'King' will be taking the 'curse' with him down south. And until he does 'right' by Cleveland and Ohio, James (and the town where he plays) will unfortunately own this dreaded spell and bad karma.

Cleveland could offer James $30 million more than any team, but that wasn't what interested James this time. He was willing to make less for something else -- a title. Maybe a bunch of them with the 28-year-old Wade and 26-year-old Bosh in their primes.

After leaving Connecticut, James touched down at a private terminal at Miami International Airport at 2:30 a.m. He was met by Heat officials, shook Riley's hand, climbed into a car and was driven away while a small group of fans, paparazzi and other news media waited outside.

Meanwhile, outside the W Hotel on Miami Beach, 17 more celebrity photographers and about a few dozen fans lurched toward every SUV that neared the hotel entrance, eager to get a look at the two-time MVP. Also inside that club was Bosh, who walked in virtually unnoticed earlier in the evening.

Meanwhile, in Cleveland, fans so accustomed to disappointment, were let down again -- this time, by one of their own sons.

Not long after James' decision was announced, one of his jerseys was shown being burned in the city's streets.

"I can't get involved in that," James said. "I wanted to do what was best for LeBron James ... At the end of the day, I feel awful. I feel even worse that I wasn't able to bring an NBA championship to that city. I never wanted to leave Cleveland. My heart will always be around that area. But I also felt like this is the greatest challenge for me, is to move on."

Even one of James' teammates was distraught.

James' decision ends nearly two years of posturing and positioning by teams hoping to add the 6-foot-8, 260-pound physical force of nature to their roster. He famously announced at New York's Madison Square Garden in November of 2008 that "July 1, 2010, is going to be a big day."

He wasn't kidding. When the clock struck 12:01 a.m. last Thursday, a free-agent frenzy unlike any before it -- in any professional sport -- got under way with the enough speculation, rumor and second-by-second intrigue to last a lifetime.

March may be madness, but this was a year's drama crammed into eight days.