From back-scratching to overpraise, why author endorsements are so bad -- and so unreliable 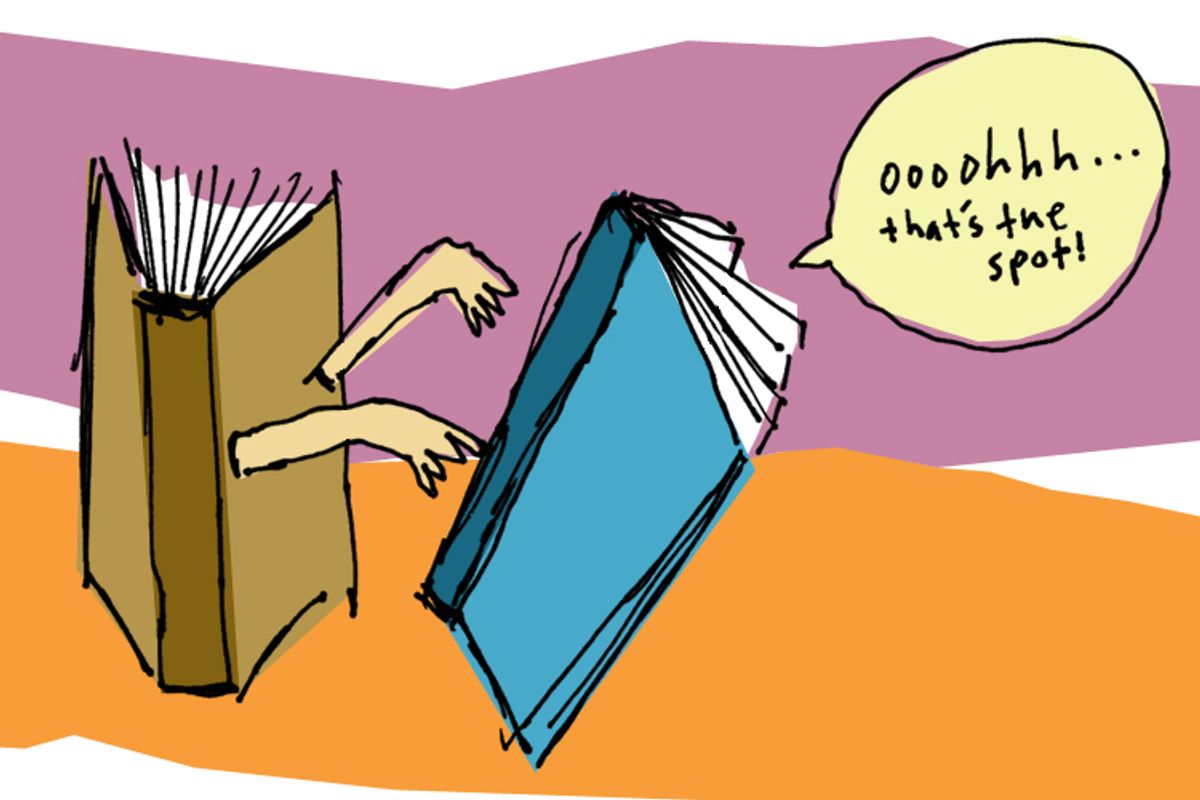 Over at the Guardian site, they're holding a contest for who can write the most ludicrous blurb for a Dan Brown novel, with predictably hilarious results. The inspiration for this antic is a pre-publication blurb written by Nicole Krauss, author of "The History of Love," for the new novel by David Grossman, "To the End of the Land." The literary blog Conversational Reading lodged the initial objection to Krauss' blurb, which was prominently printed on the front cover of the advance reader's copy:

Very rarely, a few times in a lifetime, you open a book and when you close it again nothing can ever be the same. Walls have been pulled down, barriers broken, a dimension of feeling, of existence itself, has opened in you that was not there before. "To the End of the Land" is a book of this magnitude. David Grossman may be the most gifted writer I've ever read; gifted not just because of his imagination, his energy, his originality, but because he has access to the unutterable, because he can look inside a person and discover the unique essence of her humanity. For twenty-six years he has been writing novels about what it means to defend this essence, this unique light, against a world designed to extinguish it. "To the End of the Land" is his most powerful, shattering, and unflinching story of this defense. To read it is to have yourself taken apart, undone, touched at the place of your own essence; it is to be turned back, as if after a long absence, into a human being.

Even the book's publisher seems to have realized that Krauss' praise is over-the-top and a bit icky; a commenter at Conversational Reading reported that his ARC of the novel featured an abbreviated version of the blurb.

It's easy to ridicule Krauss for this hyperbolic extravaganza, but in her defense, she's not a critic or an ad copywriter; she's a novelist. She didn't get paid to write that phalanx of clichés, and chances are she'd have preferred not to. It was a favor, intended to help out a fellow author.

The conventions and excesses of blurbology do invite mockery. (The term "blurb" is sometimes mistakenly used for the publisher-generated description printed on a book's dust jacket -- that's actually the flap copy. "Blurb" really only applies to bylined endorsements by other authors or cultural figures.) Like anything that people would rather not do, blurb-writing usually isn't done very well. So why is it done at all? Because you, dear reading public, persist in giving credence to it. Please stop.

For those unfamiliar with the process, here's how it works. Once a reasonably finished draft of a manuscript has been completed, the author, at his publisher's insistence, begins the grueling and humiliating process of begging blurbs from better-known writers. The aim is to score praise from established authors whose work has a similar appeal -- a wacky, gay-positive memoirist will try for Augusten Burroughs or David Sedaris; a female writer of mordant short stories approaches Mary Gaitskill, and so on -- but these can be nearly impossible to obtain.

The most prominent authors are inundated with such manuscripts, far more than they can ever read, especially if they hope to get on with their real job -- which is, of course, writing their own books. Many have adopted a blanket no-blurb policy, and most of these will at least occasionally wind up departing from that policy, usually for personal reasons. They might do it for a good friend or a former student, or as a favor to their editor or agent.

So when publishing people look at the lineup of testimonials on the back of a new hardcover, they don't see hints as to what the book they're holding might be like. Instead, they see evidence of who the author knows, the influence of his or her agent, and which MFA program in creative writing he or she attended. In other words, blurbs are a product of all the stuff people claim to hate about publishing: its cliquishness and insularity.

And, in fact, you'd be hard-pressed to find anyone in publishing who wouldn't agree with that judgment. Everyone seems to hate the process, from the authors who are compelled to plead for blurbs to the publishing professionals who have to lash their authors onto it, to the blurbers themselves, who often wind up walking a knife's edge between honesty and generosity. It stands to reason that, if many blurbs are bestowed for extraliterary reasons like friendship or professional collegiality, then many of them are insincere.

Faint or highly strategic praise is a sign that the blurber was less than enthralled by the work. Perhaps in such cases the blurber ought to refuse to endorse the book at all, but this is hard to do if the author knows you've already read the manuscript. It would invariably lead to awkwardness and hurt feelings when the whole point of agreeing to do the blurb in the first place was to avoid both. "A sweet tale of first impressions, second chances" -- to take one example from a blurb for a book that shall remain unnamed -- is a quintessential example of noncommittal blurbology. ("Sweet" is, in my experience, not a word anyone uses to describe a novel they genuinely like.)

When even mediocre works get glowing blurbs, you end up with praise inflation. Without a doubt Nicole Krauss truly admires David Grossman, an Israeli author of impeccable international credentials but a relatively small American audience. He's older and more accomplished than she is, but she's had more success stateside and was recently named one of the best 20 fiction writers under 40 by the New Yorker. Like many young authors who have scored a hit among their peers, she's eager to do what she can to draw more readers to a novelist she regards as a master.

But to convey the full power of her enthusiasm, Krauss has to distinguish her blurb from the usual run of exaggerated approval. Even a practiced critic can testify that positive reviews are the hardest of all to write, so when a relative novice is obliged to ratchet up her compliments to the stratosphere in, say, 100 words or less, is it any wonder that the results are atrocious?

Most of the people involved in this system are well-meaning: Blurbers want to help other authors, publishers want to win more attention for their books, and authors want to do everything they can to prove that their publishers' faith in their work has been justified. The result, however, is broken and borderline (sometimes outright) corrupt.

A few celebrated authors have made a point of regularly seeking out and championing books by writers with whom they have no connection -- Stephen King is the most prominent example. (That said, I haven't found King's recommendations particularly useful.) But overall, blurbs just aren't very meaningful. Yet, apart from a minority of skeptics, much of the public still seems to take them at face value. One British publisher claims to have seen research showing that as many as 62 percent of book buyers choose titles on the basis of blurbs.

Anecdotal evidence from online discussions and personal experience confirms this baffling preference. "I liked [Sara Gruen's] 'Water for Elephants,'" said a woman I spotted studying a copy of Lynn Cullen's "The Creation of Eve" at my local bookstore, "so maybe I'll like this one, too." (Gruen called Cullen's book "enormously satisfying.") I haven't read either book myself, so I can't weigh in on any similarity between them; for all I know Gruen meant every word of that praise. But when I suggested to this reader that blurbs can be unreliable, she glanced at me as if I were the one with the ulterior motive, nodded vaguely and drifted away, book in hand.

James Spackman of Hodder & Stoughton describes a study on the power of blurbs by Book Marketing Limited.