Potty in the USA: Why we're slow to the toilet

I thought a new movement to train at 6 months was crazy. Turns out, it's the rest of us who are out of step 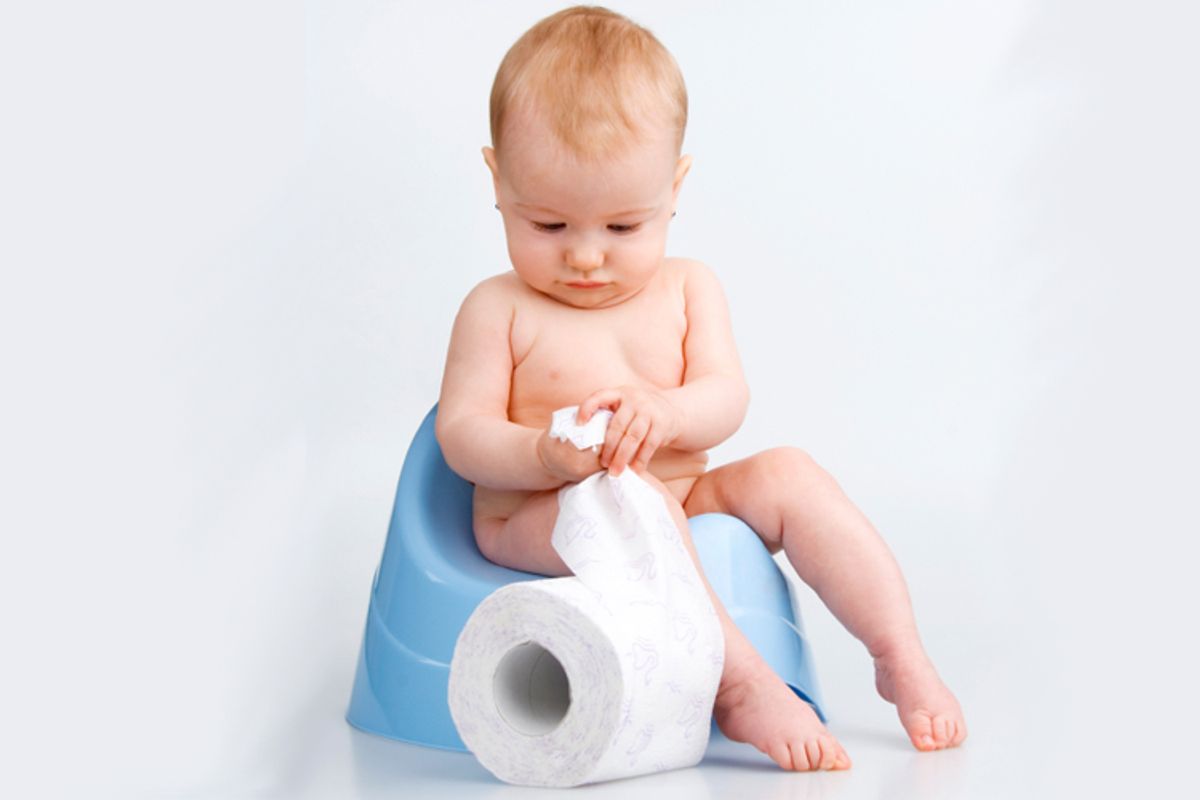 Tinier and tinier bottoms are making their way to the potty these days. In my Santa Monica, Calif., community, and other strongholds of baby wearing, co-sleeping and home birthing, a growing number of parents practice "elimination communication" -- a method that starts babies on the toilet in the first six months of life.

My first reaction: furrowed brow. Is that physically possible? And isn't toilet training supposed to unfold slowly and delicately in the preschool years, involving the dispensing of M&M's, Potty Power videos and books about the ubiquity of pooping?

Apparently, it is possible. And not only that, it's close to being the historical and cross-cultural norm. In the U.S., until the 1950s, most children were using the potty in the first few months of life and completely trained by age 1. In the 1970s, 18 months was an average age to start. Now, it's around 24 to 30 months.

Kids on the changing table have been getting older through the decades. It's partly thanks to bigger and more absorbent diapers. But we've also pushed back toilet training because in the mid 1900s, psychiatrists and pediatricians started talking about it as a psychologically meaningful stage of life -- if mishandled, a minefield for anxieties and personality problems.

As a result, mainstream wisdom has parents waiting and watching for signs that their child is ready, while diaper companies are more than happy to accommodate with jumbo sizes. But with a closer look at the research, does the idea of the toilet as a potential emotional hazard really hold up? And if not, is the early potty training crowd on to something?

Running parenting groups, I've picked up the general idea of elimination communication. Ideally, it goes something like this: Beginning in the first six months of life, parents, at regular intervals, hold their infant over a potty or sink (or as a mom recently told me, out the door of her car in a rest-stop parking lot). When the baby goes, Mom or Dad makes a "shiiis," "shuuus" or other similarly fluid sound, creating a Pavlovian association to use later as a cue.

The parent watches for indicators that No. 1 or 2 is on the way: fussing, flaring nostrils or making the classic face of extreme concentration. By 9 months, if she knows sign language (there's a good chance she would, because moms drawn to elimination communication are likely to throw in for baby sign as well), the infant might shake a chubby hand to signal. When parents see it, they head for the bathroom. And if the kid needs encouragement, the shiiis sound cues her to go. Between 12 and 18 months, many kids can use the mini-potties themselves.

How do babies really "hold it," though? Anyone who has cared for an infant knows the explosive, seemingly unpredictable, around-the-clock state of affairs taking place in their nether regions; could a crawling rattle-shaker make a conscious decision to wait, signal, sit and then go?

According to moms who follow the method, it's possible. Pediatrician Jill M. Lekovic backs this up in her book on early toilet training, "Diaper-Free Before 3," saying that going pee probably comes under voluntary control earlier than most of us think. She cites research using PET scan imaging that has shown going to the bathroom is not a simple reflex for babies. Higher regions of the brain (not just nerves in the spinal cord, as was previously thought) signal when a baby needs to go, suggesting that even the smallest infants have some level of awareness in the process. And in the behavioral psychology literature you find reports of 6-month-olds successfully signaling and withholding for short periods of time (not the hours that a preschooler might last, but still).

Of course, a small infant on the potty is not a novel idea. Throughout parts of Europe, China, Southeast Asia, India and Latin America there is no such thing as a walking, talking kid in nappies.

For the first half of the 1900s, doctors and parents debated the how and when of the potty (still training in the first year), but the process took a jump when pediatrician  T. Berry Brazelton established the "readiness" philosophy in the 1960s. He recommended that parents wait for their toddlers to tell them when they were prepared to tackle toilet training -- on their own schedule and completely in their control.

Brazelton said parents should hold off until the child is at least 18 months. Tread lightly when it comes to the loo, he noted, because a child's self-esteem hangs in the balance. Along with eating, going to the bathroom is one of the only things a kid can truly control; take that control away and you might put a dent in confidence, or trigger behavioral problems.

I think Brazelton is right in the sense that preschoolers are grappling with the need to feel powerful and exert independence. I see that every time mine throws a fit if he can't wear his favorite dinosaur shirt for the fourth day in a row.

But as far as I can tell, there's no scientific evidence to support Freud or Brazelton's notion that going potty warrants such delicate treatment. And the fact that babies are routinely toilet trained before age 1 in other cultures makes it hard to imagine that the timing would have an effect on a child's personality.

Besides, following a preschooler's lead to the potty in the interests of self-esteem building doesn't quite make sense -- "Dry-Max" pampers that fit kids 40 pounds and up make life pretty comfortable. Why bother leaving a half-built Lego tower to make a trip to the bathroom when you're wearing a perfectly good option already?

I asked a friend living in a Middle Eastern country to give me a snapshot of their toileting norms. I wasn't surprised to hear that families in the lower class start at 6 months (traditions are more protected and diapers are expensive). The kids of upper-class families with more Western influence don't use the potty until they're more like 3.

Then she writes, "By the third day (of toilet training), kids are scolded for non-compliance." Whoops. Here's where I side with Freud and Brazelton. Shaming a kid or for making mistakes while learning how his body works? Emotionally harsh and potentially damaging.

In fact when Brazelton crafted the readiness criteria it was in part reaction to the behaviorist model of the 1940s in which kids were strictly punished until they performed properly. In this way, Brazelton's work changed toilet training for the better, stripping it of any harsh consequences.

But I think the recent emergence of younger baby toilet training is a good thing. Not because it's inherently a better or more healthy way for kids (mine is 2 years old and still in diapers, so clearly I'm not a radical covert), but because it pokes holes in some of our outdated cultural notions about the potty. It's not really about when the kid is ready -- it's when the family is ready. I personally didn't have time, as a working mom, to watch my baby for flared nostrils and then dart to the sink. But for those whose lifestyle it fits, it could be satisfying, and no doubt the landfills could use the break. A hundred years after Freud told us that the toilet was pivotal, I think we can safely say it's time to get off the pot.

Heather Turgeon is a psychotherapist and freelance writer. She authors the column "The Science of Kids" for Babble.com.

Heather Turgeon is a psychotherapist and freelance writer. She authors the column, "The Science of Kids" for Babble.com.