Gay best friend: The "it" accessory

Same-sex friendships are so last year. Teen Vogue tells girls that "GBFs" are the hot commodity 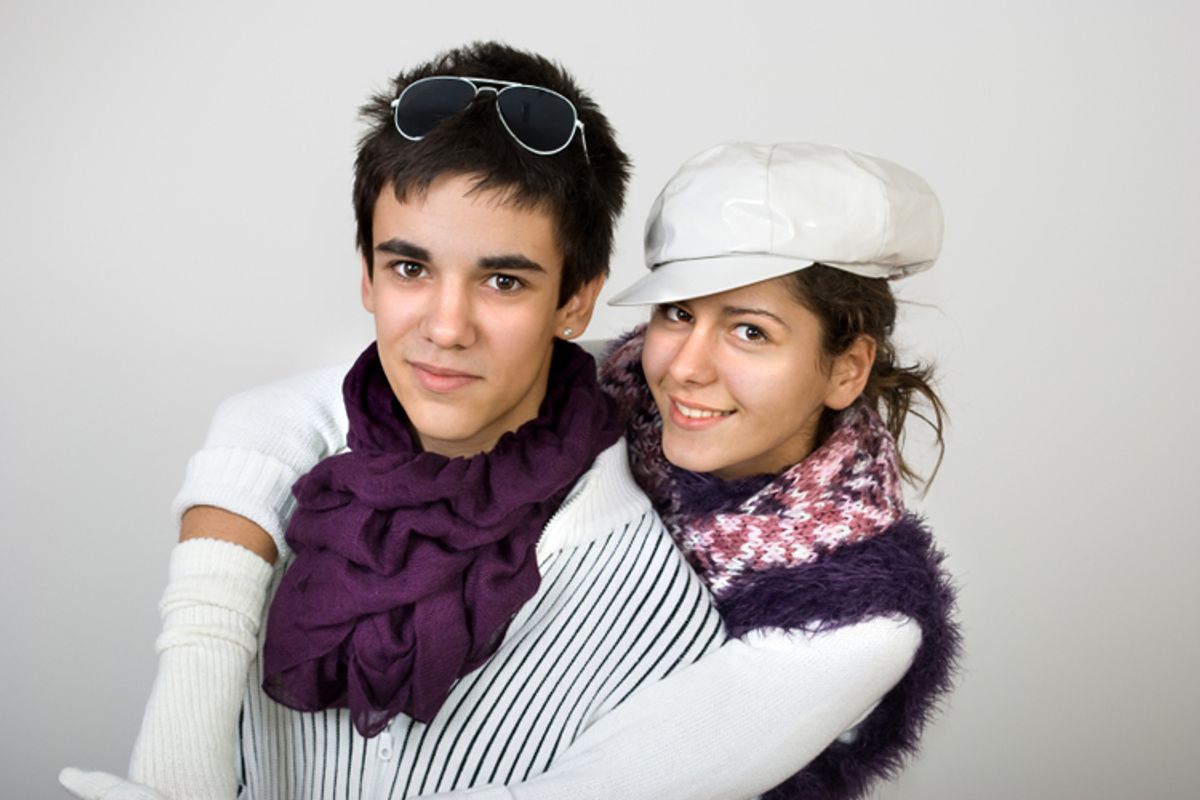 Bad news from Teen Vogue: The season's hottest accessory is not available as a Canal Street knockoff. This one needs special attention and maintenance and extra careful selection -- more so even than a Pomeranian. If you thought the old "gay best friend" hat went out when "Sex and the City's" Stanford got hitched, think again. This week, the magazine has proposed that he's "the new must-have accessory for girls."

The idea's not exactly hot off the runway, author Lindsay Talbot concedes. It dates -- practically prehistorically -- to such vintage cultural touchstones as "Clueless" and "Will and Grace." But, like the skinny jean, the GBF has methodically worked his way into the wardrobes of even the least suspecting among us -- and now look! He's everywhere. On "Gossip Girl," "Ugly Betty" and "Glee"! He's even IRL -- in the hallways of American high schools, like the one in California where, "A few years ago, all the popular, pretty girls were walking hand in hand with a preppy jock. Now you'll see them in hallways with a Mulberry bag on one arm and a Johnny Weir look-alike on the other."

Yeah, OK. First of all, it's clinically messed-up to think about the value of any relationship between humans in terms of a hipness quotient, no? Granted, this is how the teenage brain works, at times, and if Teen Vogue's raison d'être is to speak in the language of insecure adolescence, it's doing its job. I myself spent junior high wishing my parents would get divorced so that I too could have a stepmother. Certainly, there's an element of peer and pop influence at play in how adolescents look at just about everything. Why should relationships be the exception? Well, maybe because it would be socially productive for a publication -- staffed by adults for adult profit -- to avoid seizing these insecurities and magnifying them, writ large on the glossy page.

That said, it's hard to argue with the article's nutline: "Being part of a GBF couple has become the new platonic ideal." But therein lies the rub. The GBF is a fiction. Nowhere in this anecdote-heavy piece is a word to suggest that gay boys aren't literally fairies -- magical creatures exempt from human foibles who make everything pretty from their perches on flower petals. That's insulting to the intelligence of teenage girls themselves, who presumably don't see any real-life relationship through lenses so glittery. As one 20-year-old quoted patiently explains, "I think of him as my best friend in the world, not my gay boyfriend or GBF." Fetishization may be subtler than bullying or bashing, but it's still pretty dehumanizing.

Most disturbing of all is the way the piece is premised on the idea that the gay boy friend is a "must-have" because female friendships are fundamentally, fatally flawed. What's the allure of the GBF? "He's fun, trust-worthy, and supportive, plus you don't have to compete with him," the subhead crows. And experts agree! A psychologist proclaims that "Friendships between girls are often fraught with competition, whether it's over looks, weight, boyfriends, or clothes."

Then, Teen Vogue editor in chief Amy Astley herself weighs in with a bizarre postscript that seems intended to preclude political critique by conveying the notion that (I paraphrase) "Hey, you guys? Gays aren't actually commodities, they’re people with feelings, and -- sort of -- rights?" But even there, she takes extra care to drive home the point that your relationship with your female BFF is just never gonna be all it's cracked up to be. "Friendships with other girls -- even the healthiest and most supportive of relationships -- are always a teeny bit complicated," she writes. "I hate to admit it, but I feel like a tiny troll next to one of my besties, who is as tall and stunning as a supermodel; another good pal is so outrageously successful that one can't help but seem a bit of an underachiever in comparison. And that's the problem: We girls compare ourselves to one another, and it can just get a bit ... intense."

So, basically, if you're a girl who has experienced a twinge of envy -- never mind a stab in the back or an icy glare -- well, what did you expect? You may as well give up on achieving the type of, in Astley's words, "noncompetitive and nonjudgmental" support that actually happens to be the definition of real friendship -- the kind where "we make each other feel accepted and cherished" -- with those catty wenches. Instead, keep looking for that new knight in shining armor: the mystical, magical gay boy who'll always have your back.