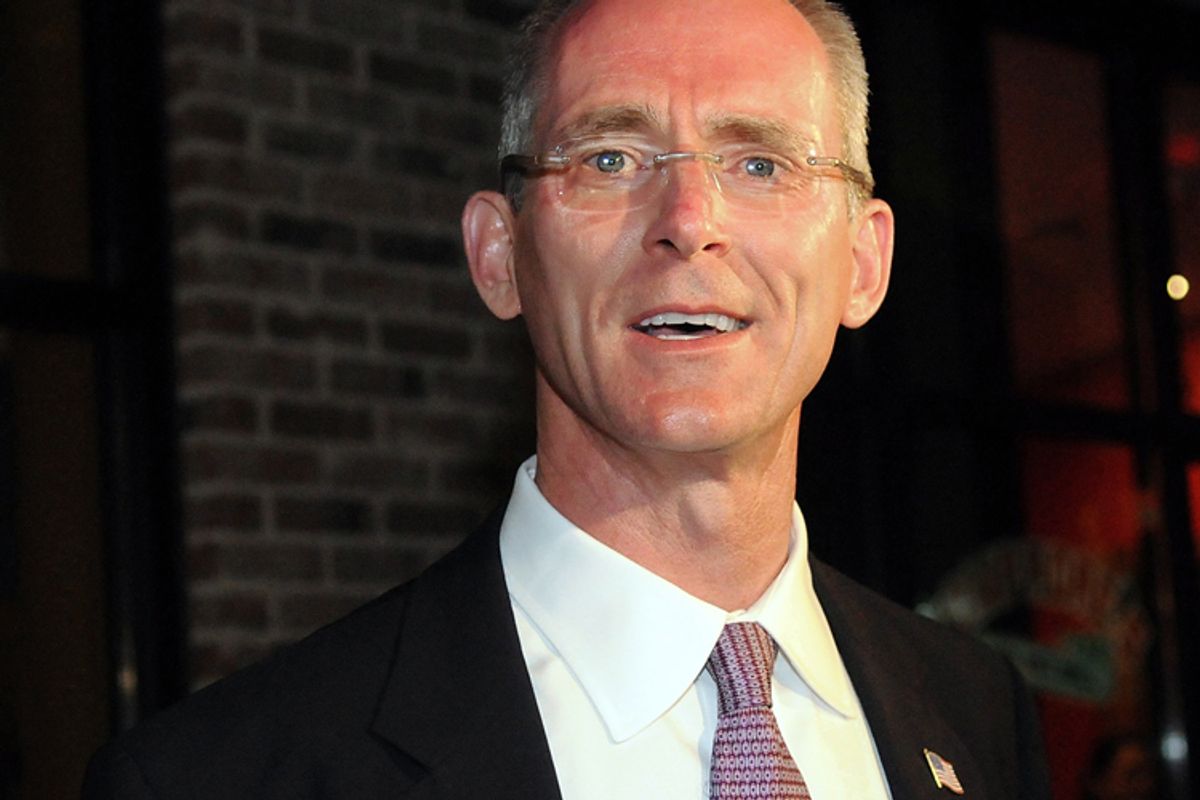 South Carolina congressional candidate Bob Inglis speaks to the media after his loss in the runoff election to Trey Gowdy on June 22.
--

What defines a "responsible" Republican in the era of Sarah Palin, Sharron Angle and Rand Paul? Ask Bob Inglis, soon to depart from Congress after six terms as a Republican representative from South Carolina. Having suffered a landslide defeat in a primary this year -- largely because he challenged the extremism of the far right and refused to pander to the "birthers" in his district -- Inglis is now speaking out about the direction of his party.

In what amounts to an exit interview with the Associated Press, Inglis warned that the GOP's eager embrace of a motley crew of media frothers, ideological fanatics and bizarre conspiracists is inflicting grave damage on the party's integrity.

According to the AP, he denounced the "death panel" myth popularized by Palin as an example of "the lowest form of political leadership. It's not leadership. It's demagoguery." He is also appalled by the undue influence of figures such as Rush Limbaugh and the Fox News gang, especially Glenn Beck, whom he described as a "divisive fear-monger" at a town hall meeting earlier this year.

"I think we have a lot of leaders that are following those (television and talk radio) personalities and not leading," he said. "What it takes to lead is to say, 'You know, that's just not right.'" The obvious result is that the country becomes too polarized and too distracted by phony issues to address real problems.

As a white Southerner, Inglis said he is also sadly convinced that racism is among the motives of the most fanatical Obama opponents. He recalled being "shocked" as he watched Tea Party protesters heckling Rep. John Lewis in the Capitol last spring. Although he was too far away to hear the alleged racial slurs hurled at Lewis, a veteran of the civil rights movement in the South, he saw that the behavior of the mob was "threatening and abusive." At the time he said to Lewis -- who was beaten by racists in 1961 in Inglis' home state as he tried to register black voters -- "John, I guess you've been here before."

The ousted Inglis is not alone in worrying about the takeover of his party by angry, irrational and potentially dangerous extremists. Today Washington Post columnist Michael Gerson voiced the same concern. The former Bush speechwriter is disturbed not only by Angle's rhetorical violence and Paul's libertarian excesses but by the Arizona GOP's pandering to anti-immigrant prejudice. A Republican victory in November is only likely to worsen these alarming tendencies:

The response of many responsible Republicans to these ideological trends is to stay quiet, make no sudden moves and hope they go away. But these are not merely excesses; they are arguments. Significant portions of the Republican coalition believe that it is a desirable strategy to talk of armed revolution, embrace libertarian purity and alienate Hispanic voters. With a major Republican victory in November, those who hold these views may well be elevated in profile and influence. And this could create durable, destructive perceptions of the Republican Party that would take decades to change. A party that is intimidated and silent in the face of its extremes is eventually defined by them.

Gerson is understandably affronted by these clowns, but it is difficult to understand why he describes the Republicans who acquiesce in extremism as "responsible."  It would be more apt to call them  "culpable" or "cowardly." If he's looking for responsible Republicans, they're the ones who are being ejected from office in primaries -- like Bob Inglis.