Why the Obama-is-a-socialist poll isn't surprising 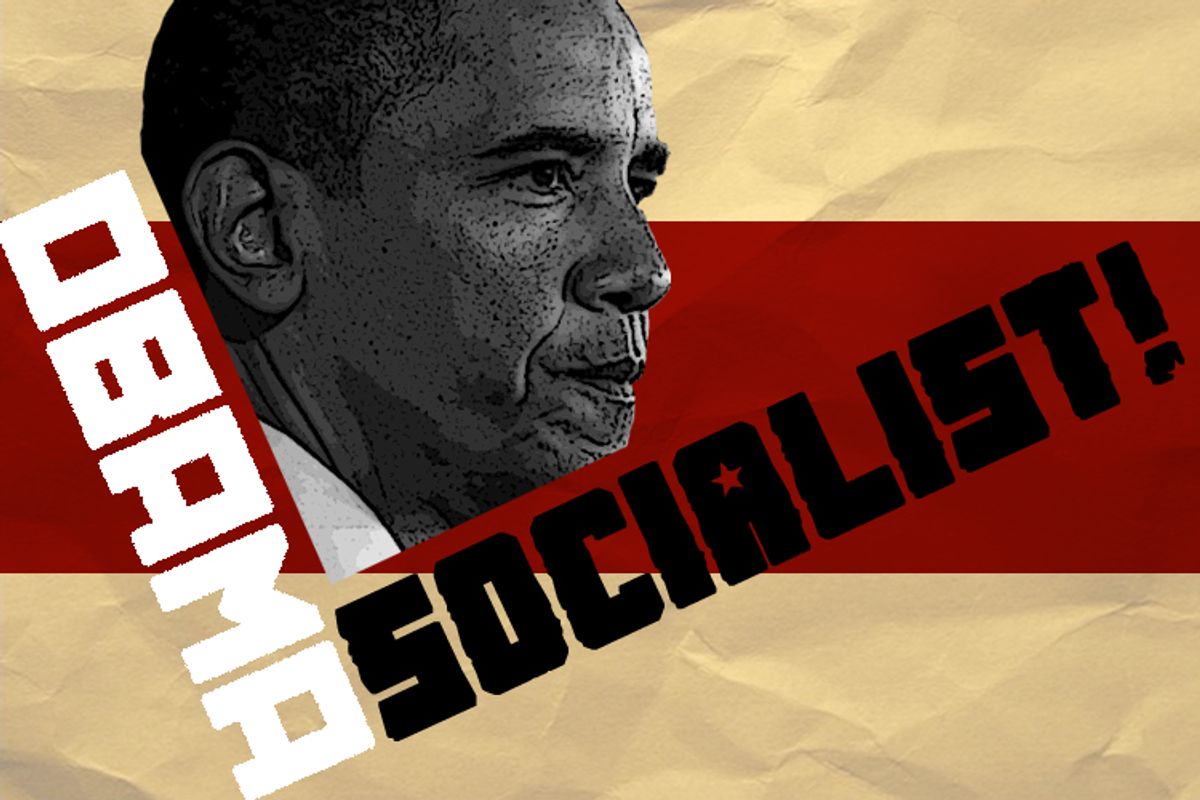 At first, the news that 55 percent of likely voters in this fall's midterm elections think the term "socialist" describes President Obama well seems alarming. Very alarming. But it's actually not all that surprising.

The first thing to keep in mind is that we're talking about likely midterm voters, which means that the sample is skewed to include more Republican-friendly voters, who are more likely to turn out in November. This is what always happens in midterm elections: The out party's base is more motivated.

Of course, this only accounts for a few extra points. As the poll shows, even when the pool is broadened, the number of voters who describe their president as a socialist is quite high. But maybe this has always been the case? The right has been screaming about Obama's "socialism" since the summer of 2008 (at least) -- long before he was elected, long before he was sworn in, and long before he signed a single piece of legislation. In other words, the right reached its conclusion before there was any evidence. (This is the "thinking with my gut" mentality that Stephen Colbert likes to mock.)

I can't immediately recall or find any polling from the '08 campaign about the Obama/socialism question. But it seems entirely possible that, even during that campaign, around 40 percent of the electorate would have described him as a socialist. This isn't to say that they knew what the term meant (or even how to spell it); they just latched onto it because it meshed with the emotions that Obama and his supporters stirred in them. And now the number has jumped, with some voters from outside the hardened GOP base joining in the name-calling. One of the pollsters for Democracy Corps, which conducted this new survey, offered a reasonable explanation for these new converts:

"It probably has to do with the fact that people are very unhappy with the dire economy and the fact that the budget deficit is quite large," Craighill said. "People who don't like the man are going to use any label they can to ding him, even if they don't think he's a socialist in the vein of the Soviet Union or China."

What may be most significant about this poll is the originality of Democracy Corps, which thought to ask about socialism. Traditionally, pollsters have asked the same basic questions about presidents and politicians: Do you approve of the job he/she is doing? Do you think he/she is honest? Do you like how he/she is handling issue X? And so on. But now, with more polling outfits competing to distinguish themselves, the questions are becoming more creative -- and the results, perhaps, more revealing.

Remember last summer, when PPP thought to ask New Jersey voters whether they thought Obama was the antichrist -- and found that 18 percent of self-identified conservatives actually did? Those kinds of questions just weren't asked in the past. If they had been, I bet we'd now be able to look back at a whole lot of similarly ridiculous findings about past presidents.