If she does run for president, her path will be more complicated than her true believers realize 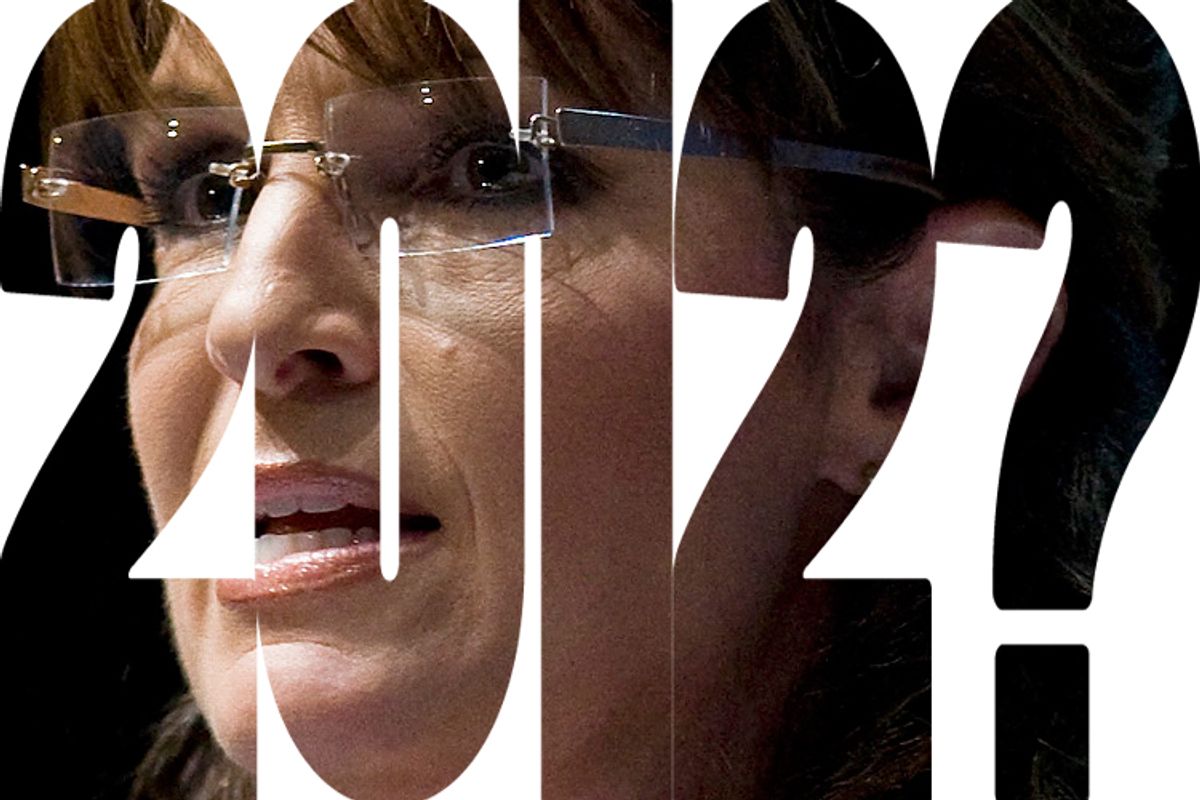 Andrew Sullivan has a good roundup of some of the recent punditry about Sarah Palin and the 2012 Republican presidential nomination. I've given my position before: Anyone who thinks she has it locked up is nuts, and anyone who thinks that there's zero possibility of her winning is also nuts. But that does raise the question: What can we know now? What should we ignore? And by the way, how does the nomination process work, anyhow?

Second: We don't know what she really wants, but we can say that she's doing the things now that a presidential candidate in her position would do. I'm comfortable with saying that she's currently running for president (along with Romney, Pawlenty and others). Or, as Josh Putnam would but it, she's running for 2012, whether or not she'll be running in 2012. That description would have fit Hillary Clinton and John Edwards -- and Al Gore and John Kerry -- in 2005-2006.

Third: Presidential nominations are ... I need a word not quite as strong as "controlled," but much stronger than "influenced" ... .by political party leaders. See below, for an explanation. What that means is that it's very unlikely that a candidate disliked by party leaders could actually get herself nominated. If party leaders don't want Palin -- and I think they'd be nuts to want her, but that doesn't mean they won't -- then they'll have little trouble keeping the nomination from her. The best recent example of this was the fate of Mike Huckabee in 2008, but another reasonable example is Dan Quayle's failed bid for the 2000 nomination, when various conservative opinion leaders who had been quick to defend Quayle up to that point did not take his candidacy seriously, and it quickly ended. If Republican leaders don't want Palin, you'll start hearing negative stories about her on Fox News, and from leading conservative talk shows and blogs, and enthusiastic conservatives will turn elsewhere.

Fourth: A useful reminder: Many conservatives are enthusiastic about Sarah Palin in the context of Palin vs. Obama. But in 2011 and 2012, if she's actively campaigning, she won't be running against Obama; she'll be running against Romney, Pawlenty and other conservatives. Yes, some of those other candidates aren't exactly household names, or able to elicit the kind of enthusiasm among conservatives that Palin has now, but give them some positive buzz from Rush and Hannity and the rest, and that can be created real fast.

(By the way -- that doesn' t just happen on the right, and Hillary Clinton found out the hard way.)

Fifth and last: I recommend moving anyone who predicts that the Sage of Wasilla will repeat as V.P. nominee to the bottom of your reading list. Really, she might be president, she might be the next Oprah, she might be the first woman on the moon, but there's just no way that anyone is going to select her as their running mate after the way she treated the McCain campaign.

Now, bonus content: Presidential Nomination Process 101. I said that nominations are controlled by "party leaders." That does not mean that a handful of people sit down in a room in Washington and dictate the nomination. What it means is that quite a few people, including the leaders of party-aligned interest groups, local and state party leaders, big donors, opinion leaders, major politicians at the state and national levels, and ordinary activists, collectively try to come to a decision. The role of the voters over the last couple of decades has been three things. First, and most basically, voters ratify the decisions of party leaders. Second, in cases in which party leaders split, voters may determine the outcome. And, third, it appears that party leaders sometimes use voters in the early primaries and caucuses to test how a candidate they are considering supporting will play with the electorate. So Howard Dean failed that test in Iowa in 2004, while Barack Obama passed it in 2008. Those insiders narrow down the field during the "invisible primary" -- hey, wait, that's happening right now! That's why, for example, by the time the voters started choosing in 2008 such reasonable-on-paper candidates as Joe Biden, Chris Dodd and Bill Richardson were reduced to asterisks; they had already been winnowed out before anyone even voted.

OK, that's what we do know. What we -- that is, what political scientists -- don't really know is which party leaders are the most influential in any one party at any one time. We're much better at figuring that sort of thing out after the fact. So there's plenty of scope for good reporting, especially over the next year or so when things are beginning to matter. Things such as the National Journal's insiders poll are helpful; campaign finance reports will start being helpful; endorsements are helpful. But it's also helpful to poke around aggressively to find out which interest group leaders are thought of as serious players and which are resting on their reputations; which state and local party people carry resources with their endorsements; which Washingtonians are really plugged in to conservative networks, and which are just repeating stale conventional wisdom. Good reporters can get to that kind of stuff as it's happening. So my advice is to pay attention to reporters and pundits who seem to know what they're talking about when it comes to the Republican Party network, and less attention to those who think they know what's in Sarah Palin's head.