"Drawing the Map of Life": How DNA will change our future

The Human Genome Project uncovered the blueprint of life. Now scientists are using it to save us -- and the planet 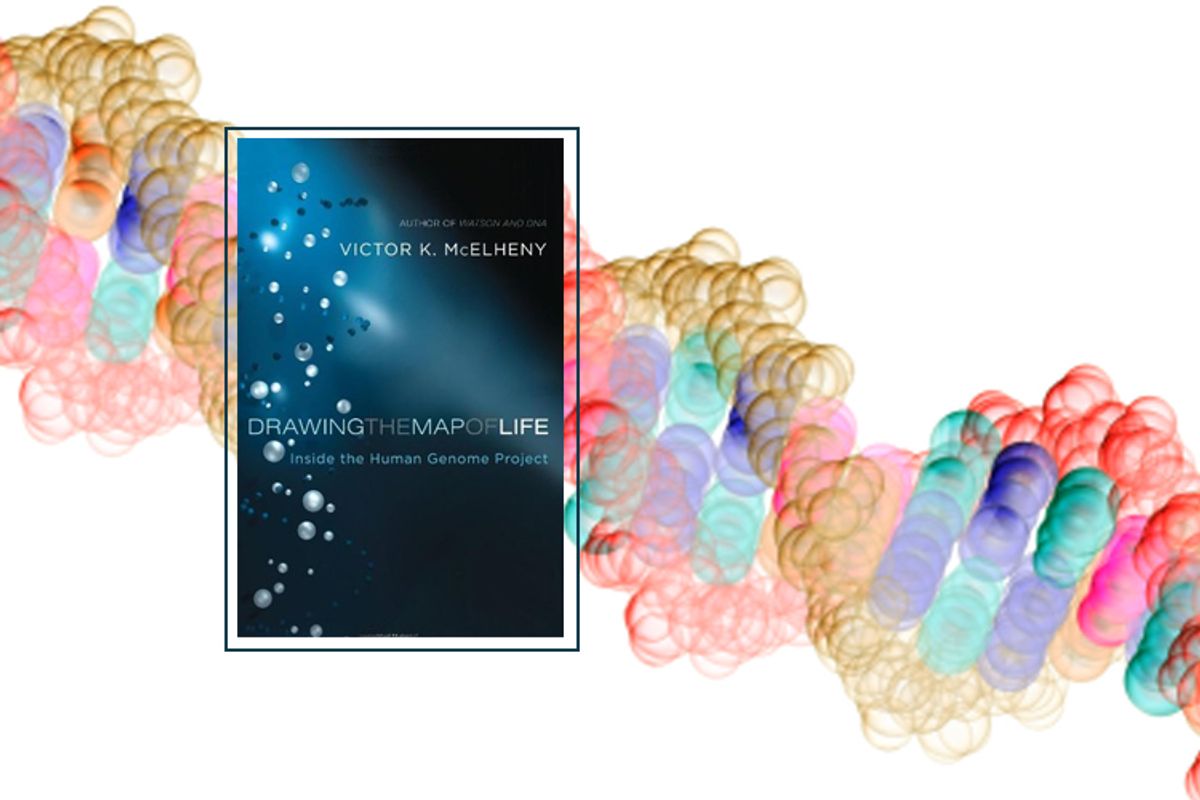 Nearly 10 years ago, scientists accomplished a feat that many people expected to revolutionize Western medicine. The Human Genome Project, an international research project involving hundreds of scientists and numerous laboratories around the world, announced that it had finished a draft of the human genome, comprising approximately 3 billion base pairs (complementary molecules that make up DNA). These DNA-sequence maps — the culmination of more than a decade of work and an investment of billions of dollars — held the promise of becoming an immeasurably valuable tool for researchers looking to fight everything from cancer to AIDS. As James Watson, the co-discoverer of DNA, touted: "This may be the most important step we've taken in science. We've got our instruction book."

But these days, the popular excitement surrounding the project has largely abated: The sequencing of the genome hasn't led to the rollout of any game-changing new drugs; we've yet to discover the genes responsible for Alzheimer's or Huntington's, among many other diseases, and the era of mass personalized medicine — in which doctors can tailor treatments to people's specific genetic code — has yet to come. But as Victor McElheny, a longtime science reporter and the founder of the Knight Science Journalism Fellowship at MIT, points out in his new book about the tumultuous evolution of the Human Genome Project, "Drawing the Map of Life," the widespread impact of genome sequencing is only now beginning to be felt, and a new era of genetically informed medicine is just around the corner.

Salon spoke to McElheny over the phone from Cambridge about the legacy of the Human Genome Project, the advent of hyper-personalized medical treatment, and how artificial chromosomes will help us fight global warming.

It's been nearly 10 years since the first draft of the human chromosome was released. In hindsight, how important was this?

Very. They were looking for a basic tool to speed up biology and its applications for medicine. That code is now almost universally used in biomedical research. They wanted a fundamental unpatented resource available for everybody online — and now you have a reference sequence that's available to scientists worldwide that's attracting thousands of people every day.

Scientists in your book compare the Human Genome Project to the space race and the Manhattan Project. Are they really on the same scale?

This was not a command decision like the atomic bomb or the race to the moon; the pressure to do this bubbled up from all over the biological community. It was also a great deal less expensive than either of those. The genome project today constitutes $500 million out of a $30 billion NIH [National Institutes of Health] budget. For that rather small amount of money each year, the impact on the rest of biology is huge. And genetics plays a rather big part in your susceptibility to not only rare and tragic diseases but also very common ones, like diabetes or heart disease or Alzheimer's.

But very few Americans seem to know or care about the Human Genome Project — at least compared to the atomic bomb or the moon landing.

DNA isn't really part of our culture. We talk about it, and use the three letters, but the popular knowledge of genetics is pretty modest. The Human Genome Project is also part of something much, much bigger: the biological revolution. Over the 150 years, the biological revolution has enabled most of us to live today. We've figured out that disease is caused by microbes, learned how to do anesthesia and create antiseptic operating rooms, delivered masses of clean water to people, and refrigerated our food. The Human Genome Project is just a small part of that, and when you have medical miracles happening all the time, you have this incredible expectation of medical or biological progress.

What were the biggest surprises to come out of the project? One was that we have far fewer genes than we first expected, about 20,000 instead of hundreds of thousands.

The reason we thought the number was much larger was because we know there are hundreds of thousands of proteins in each cell that genes must be coding for. A bigger surprise, I think, emerged from the sequencing of the mouse. Humans diverged from mice, as far as we can tell, 90 million years ago, but it turns out our sequences are extremely similar. There's only a 1 or 1.5 percent difference between ours and that of the mouse. What shocked people was how much of the non-coding stuff [or so-called junk DNA] was shared. Presumably a lot of the signals that tell the genes to turn on and turn off or to go fast or to go slow are not encoded in what we think of as the genes themselves.

Where are all the genetically tailored drugs that people were expecting to come out of this?

Koch found the organism for tuberculosis in 1882. You didn't get a mass use of the vaccine for 40 years after that. We still are struggling to understand the function of particular genes, and coming to understand that a lot of genes act in concert with others — even dozens of others. The people who are working on this stuff are not discouraged at all. They're fascinated. They're excited. They're spending more money, and they're getting more money.

What about the prospect of medical treatment custom-tailored to our personal genetic code? Shouldn't we all be sequencing ourselves by now and taking our print out to the doctor's office?

Right now people can go to 23andMe, which will analyze their DNA and post it on a protected Web page showing their risk of getting a particular disease. Does it actually tell you much that's medically useful? Right now I think the answer is no. Are you going to get better medical information from your genome than from your family history? Probably not. There's too much uncertainty about risk factors, and your doctor is unlikely to be able to interpret it, because he or she has only a moderate amount of training in genetics.

But the price of getting your whole sequence is plummeting. We're at the $10,000 mark for a whole human sequence now, and we're heading to an order of magnitude less than that. In a few years it'll be in the same domain as a CT scan. Massachusetts General Hospital and Sloan-Kettering in New York have begun to set up the means to get very detailed genetic pictures of every one of their cancer patients. They're doing that partly now with DNA chips, but it's very likely that they're going to get into the sequencing business.

There was a team at Yale that sequenced all the coding DNA of a little Turkish baby boy and they were able to find what the disease the boy was suffering from — it was rare and genetic and treatable. There's the family of four in Utah that were sequenced by a company called Complete Genomics in California, which found a specific problem that a couple of the children in the family had. It's starting.

So in the future we'll all have our gene maps.

Yes, indeed. The knowledge of our health is going to belong to us in a new way, which will be exhilarating — but it is going to impose new responsibilities. Our genetic information, after all, is significant to our siblings, our spouses, parents, children and other relatives. We're going to be doing a lot of growing up in the way we think about genetics in the next decades.

Bio-entrepreneur Craig Venter, whose company was involved in the race to sequence the human genome, recently announced that he'd inserted a first synthetic chromosome into a cell. How important is this news?

It's a sign that energy and the environment are becoming new fronts in genomic research. We're trying to find sustainable and renewable new sources of energy. Venter has essentially reprogrammed a living organism with an artificial genome — he hasn't claimed to have created artificial life — but that's potentially very important because it could lead to the creation of organisms that can break down acid mine waste or highly radioactive waste or produce fuel.

Exxon Mobil has given $300 million to Venter's team's ability to turn algae into liquid fuel. A formerly very skeptical big oil company has now bet big on synthetic genomics. My guess is that we're going to see an enormous amount of artificial genomics in science and industrial development.

How significant is this to the fight against global warming?

If we can tailor a microbe to help to create sustainable energy economies, that's very big. But it's going to take decades to do.

Twenty years down the line, how do you think we'll be using the knowledge from the Human Genome Project?

Human genomics is not a fad like Facebook. This is something very big, and it's going to become very pervasive. I think it'll be a much bigger part of how we run medical tests, how we run cancer therapy, and a bigger part of the energy and agriculture fields.

We're not going to escape from genetically modified crops. We can sit around and hiss at Monsanto and so on, but in order to feed the 9 billion people in the year 2040, we're going to have to do an awful lot of genetic modifications of crops beyond traditional plant breeding. G.M. crops are in our future in a very big way, and the entire European Union is going to have to get to get used to that.